Barbuda (/bɑːrˈb(j)uːdə/)[1][2] is a small island located in the eastern Caribbean forming part of the sovereign Commonwealth nation of Antigua and Barbuda. It is located north of the Antigua Island and is part of the Leeward Islands of the West Indies. Antigua and Barbuda gained full independence on 1 November 1981 as a constitutional monarchy within the Commonwealth of Nations.[3] The island is a popular tourist destination because of its moderate climate and coastline.

Historically, most of Barbuda's 1,634 residents have lived in the town of Codrington.[4] However, in September 2017, Hurricane Irma damaged or destroyed 95% of the island's buildings and infrastructure and, as a result, all the island's inhabitants were evacuated to Antigua, leaving Barbuda empty for the first time in modern history.[5]

The Ciboney (Guanahuatebey) peoples inhabited the area in the Stone Age.[6][7] The island was populated by Arawak and Carib Indians when Christopher Columbus landed on his second voyage in 1493. Early settlements by the Spanish were followed by the French and English who formed a colony in 1666.

In 1685, Barbuda was leased to brothers John and Christopher Codrington, who had founded the town of Codrington. The Codrington family produced food and transported slaves as labour for their sugarcane plantations on Antigua. During the 1740s, there were multiple slave rebellions at Codrington and all slaves were freed in 1834.

On 1 November 1981, the island gained its independence as an integral part of Antigua and Barbuda, a member of the Commonwealth of Nations. In a 1989 election, the Barbuda Independence Movement received too few votes to qualify for a seat in the national parliament.

There is a widespread but disputed belief, shared by some Barbudans, that the Codringtons set up a human stock farm on Barbuda for the purpose of breeding the strongest, tallest enslaved people.[8][9] An article in the Annals of the New York Academy of Science has disputed this, stating that the Codringtons considered using Barbuda as a nursery, where slave children would have been raised to work on Antiguan plantations, but this plan was never realized.[10] Other sources indicate that slaves were, in fact, an export commodity[11] but this was probably due to natural population growth since no new slaves had arrived on the island since the mid-1700s.[12]

In any event, the island was certainly an exporter of slaves. An estimate in 1977 by Lowenthal and Clark indicated that between 1779 and 1834, 172 slaves were exported. Most were taken to Antigua, but 37 went to the Leeward and Windward islands, and some went to the southern US. Several slave rebellions took place on the island, with the most serious in 1834-1835.[13]

Britain emancipated slaves in most of its colonies in 1834, but that did not include Barbuda, so the island freed its own slaves at that time. For some years afterward, the freed slaves had little opportunity of survival on their own because of limited agricultural land and the lack of available credit to buy some. Therefore, they continued to work on the plantations for nominal wages or lived in shantytowns and worked as occasional labourers.[14] Sugarcane production remained the primary economy for over a century. Effective trade unions were not formed until the 1930s.[12]

The first map of Barbuda was made in the second half of the 18th century. At that time there were substantial buildings in the Highland area, a castle in Codrington, a fort on the river, now known as the Martello Tower, and houses at Palmetto Point, Coco Point, and Castle Hill. The map shows eight catching pens for holding captured runaway slaves, indicating that this was a serious problem. There were several defensive cannon batteries around the island perimeter, as well as a large plantation in the Meadow and Guava area and another large plantation in the Highlands.[13]

The Barbuda Land Act of 2007 establishes that the citizens of Barbuda communally own the land.[15] The act specifies that residents must provide consent for major development projects on the island.[16] The Government of Antigua and Barbuda passed the act on January 17, 2008.[17]

One of the most devastating hurricanes to strike the northern Leeward Islands in the 20th century, Hurricane Luis, a Category 4 storm, caused very extensive destruction to Barbuda in September 1995. Most houses were damaged or destroyed, with three deaths, 165 injuries, and power and water system disruptions. The hurricane left over 300 homeless; many lived in shelters for months. Estimated cost of rebuilding ranged from $100 million to $350 million.[18] Not all damaged buildings were replaced, and in early 2013, only two very expensive hotels were operating in addition to a few cottages that were for rent. In fact, there were very few facilities for tourists.[19] A report in early 2017 confirmed that there were still only two hotels; the primary attractions were the pristine beaches.[20] Many of the accommodations listed on the TripAdvisor page for Barbuda were actually in Antigua.[21] 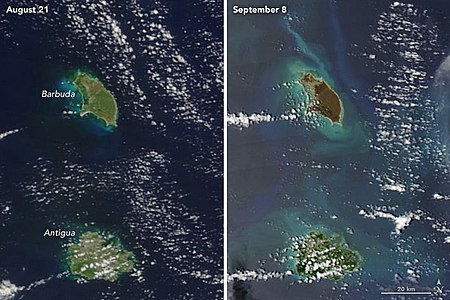 Satellite images of Antigua and Barbuda from August 21, 2017, and September 8, 2017, illustrating the damage caused by Hurricane Irma to Barbuda. The browning of the island was a result of extreme wind damage to foliage and desiccation of vegetation due to sea spray.[22]

22 years after Hurricane Luis, Hurricane Irma caused catastrophic damage when it made landfall on the island on 6 September 2017. Prime Minister Gaston Browne stated that the Category 5 hurricane had destroyed 95% of the structures and vehicles on the island.[23] Initial estimates showed that at least 60% of the island's residents were homeless because of the disaster.[24] All communications with Barbuda were down for a time; the storm had destroyed most of the communications system.[25]

On 8 September 2017, the government began to evacuate the entire island (with residents moved to Antigua) in anticipation of the Category 4 Hurricane Jose, which was approaching from the east.[26] Nearly 1,800 residents were evacuated to Antigua;[27] some were accommodated in the Sir Vivian Richards cricket stadium.[28] A hurricane warning for Jose was issued for several islands, including Barbuda.[29][27]

On 14 September, Ronald Sanders, Ambassador to the US, described the situation on Barbuda: "There is no electricity there, there is no potable water anymore, there is no structure in which people can survive. We have a mammoth task on our hands."[5] He also stated this is the first time in 300 years that the island has not had a single living person on it.[30][inconsistent] Sanders said, "We are a small island community — the gross domestic product of Antigua is $1 billion a year. We cannot afford to take on this responsibility by ourselves. Barbuda is not just a disaster, it's a humanitarian crisis. We are hopeful that the international community will come to our aid, not because we're begging for something we want, but because we're begging for something that is needed."[5]

The United States Agency for International Development confirmed its commitment to provide coordination between the government and aid organizations; it also sent a Disaster Assistance Response Team.[31] On 8 September, the first of three cargo planes arrived in Antigua from the US, with over 120,000 pounds of relief supplies for Barbudans. The cost was covered by the Government of Antigua and Barbuda and with donations from Martin Franklyn and the Coleman Company in the US.[32]

An estimate published by Time indicated that over $100 million would be required to rebuild homes and infrastructure. In a statement, Sanders stated that the reconstruction may cost up to $300 million. Philmore Mullin, Director of Barbuda's National Office of Disaster Services, said that "all critical infrastructure and utilities are non-existent – food supply, medicine, shelter, electricity, water, communications, waste management... Public utilities need to be rebuilt in their entirety... It is optimistic to think anything can be rebuilt in six months ... In my 25 years in disaster management, I have never seen something like this."[28]

A report in April 2018 indicated that many of the few people living on the island were making do in tents; some government buildings were still being repaired.[33] By that time, water and electricity were available in government buildings, the police station, the hospital and the post office in Codrington. Prime minister Gaston Browne said there were plans to build a new runway for jets at the airport but no specifics had been released.[34] 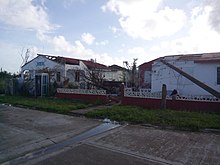 A house that was badly damaged by the hurricane

By February 2019, an estimated 75% of residents had returned from Antigua.[35] Both China[36] and the European Union[37] funded rebuilding efforts which restored parts of the residential housing. Plans by Prime Minister Gaston Browne to overturn the century-old Barbudan communal land ownership by allowing residents to purchase land they occupy has been criticised as promoting "disaster capitalism".[35][38] Seen in relation with the planned construction of a new international airport,[39] critics voiced concerns that the main benefactors would not be the local populace, but international companies aiming to establish mass tourism.[35][40]

Barbuda's climate, pristine beaches, and geography attracted tourists for many years. Barbuda was served by Barbuda Codrington Airport and also had a ferry service to Antigua. Activities included swimming, snorkeling, fishing, and caving. Years after Hurricane Luis, in August 2017, there were still only two operating resorts on the island, although plans were being made to build other resorts before Hurricane Irma.[41]

Attractions that were popular included the Frigate Bird Sanctuary in the Codrington Lagoon, Martello Tower, a 19th-century fort and the Indian Cave with its two rock-carved petroglyphs. Other points of interest included the beautiful Pink Sands Beach, Darby's Cave, a sinkhole with a tropical rain forest inside and Highland House (called Willybob locally), the ruins of the 18th-century Codrington family home, and the Dividing Wall that separated the wealthy family from its slaves.[42][41][43]

The total land area is 160.56 square kilometres (62 sq mi). The capital and largest town is Codrington, with an estimated population of 100 (2017 Estimated). More people of Barbudan descent live on Antigua rather than on the island itself. The island is mostly coral limestone with little topographical variation. The "highlands" area on the eastern side of the island has hills rising to 125 ft (38 m), but the majority of the island is very flat, with many lagoons in the northwest corner.

The island is susceptible to hurricanes between August and October.

See also: List of mammals of Antigua and Barbuda

Barbuda is home to some notable wildlife, including the Antiguan racer, which is among the rarest snakes in the world. The Lesser Antilles are home to four species of racers. All four have undergone severe range reductions; at least two subspecies are extinct, and another, A. antiguae, now occupies only 0.1% of its historical range.[44]

Griswold's ameiva (Ameiva griswoldi) is a species of lizard in the genus Ameiva. It is endemic to Antigua and Barbuda and is found on both islands.

Like in Antigua, the education in Barbuda follows the British system with its three levels: primary, secondary, and tertiary. It is free and compulsory for students up to the age of 16.[45] The educational policy focuses on the philosophy that "each child should first be socialized as a human being and secondly as an economic unit of production."[46] See also the Education in Antigua and Barbuda for more information about education in the island.