ISBN (identifier) Ecumenical Patriarchate of Constantinople Eastern Orthodox Church
This article is about all Orthodox jurisdictions of Greek cultural heritage. For the Orthodox Church in Greece, see Church of Greece.

The name Greek Orthodox Church (Greek: Ἑλληνορθόδοξη Ἑκκλησία, Ellinorthódoxi Ekklisía, IPA: [elinorˈθoðoksi ekliˈsia]), or Greek Orthodoxy, is a term referring to the body of several Churches[2][3][4] within the larger communion of Eastern Orthodox Christianity, whose liturgy is or was traditionally conducted in Koine Greek,[5] the original language of the Septuagint and the New Testament.[6][7] Its history, traditions, and theology are rooted in the early Church Fathers and the culture of the Byzantine Empire. Greek Orthodox Christianity has also traditionally placed strong emphasis on and awarded high prestige to traditions of Eastern Orthodox monasticism and asceticism, with origins in Early Christianity in the Near East and in Byzantine Anatolia.

Historically, the term "Greek Orthodox" has been used to describe all Eastern Orthodox Churches in general, since "Greek" in "Greek Orthodox" can refer to the heritage of the Byzantine Empire.[8][9][10] During the first eight centuries of Christian history, most major intellectual, cultural, and social developments in the Christian Church took place within the Empire or in the sphere of its influence,[10][11][12] where the Greek language was widely spoken and used for most theological writings. Over time, most parts of the liturgy, traditions, and practices of the church of Constantinople were adopted by all, and these still provide the basic patterns of contemporary Orthodoxy.[13][14][15] Thus, the Eastern Church came to be called "Greek" Orthodox in the same way that the Western Church is called "Roman" Catholic. However, the appellation "Greek" was abandoned by the Slavic and other Eastern Orthodox churches in connection with their peoples' national awakenings, from as early as the 10th century A.D.[16][17][18] Thus, in the early 21st century, generally only those churches that are most closely tied to Greek or Byzantine culture are called "Greek Orthodox".

The Greek Orthodox churches are descended from churches which the Apostles founded in the Balkans and the Middle East during the first century A.D.,[19][20][21][22][23][24][25] and they maintain many traditions practised in the ancient Church.[25] Orthodox Churches, unlike the Catholic Church, have no single Supreme Pontiff, or Bishop (see also: Pontifex maximus), and hold the belief that Christ is the head of the Church. However, they are each governed by a committee of Bishops, called the Holy Synod, with one central Bishop holding the honorary title of "first among equals".

Greek Orthodox Churches are united in communion with each other, as well as with the other Eastern Orthodox Churches. The Orthodox hold a common doctrine and a common form of worship, and they see themselves not as separate Churches but as administrative units of one single Church. They are notable for their extensive tradition of iconography (see also: Byzantine art), for their veneration of the Mother of God and the Saints, and for their use of the Divine Liturgy on Sundays, which is a standardized worship service dating back to the fourth century A.D. in its current form. The most commonly used Divine Liturgy of the Orthodox Church was written by Saint John Chrysostom (347–407 A.D.). Others are attributed to St. Basil the Great, St. James, the Brother of God and St. Gregory the Dialogist.

There are also many Greek Orthodox Christians, with origins dating back to the Byzantine and Ottoman periods, who are of Arabic-speaking or mixed Greek and Arabic-speaking ancestry and live in southern Turkey, Israel, Palestine, Iraq, Syria, Lebanon, Jordan, and Egypt. They attend churches which conduct their services in Arabic, the common language of most Greek Orthodox believers in the Levant, while at the same time maintaining elements of the Byzantine Greek cultural tradition.

Ethnic Greeks in Russia and Greeks in Ukraine, as well as Pontic Greeks and Caucasus Greeks from the former Russian Transcaucasus, often consider themselves both Greek Orthodox and Russian Orthodox, which is consistent with the Orthodox faith (since Orthodoxy is the same across ethnic boundaries). Thus, they may attend services held in Old Russian and Old Church Slavonic, without this in any way undermining their Orthodox faith or distinct Greek ethnic identity. Over the centuries, these Pontic Greek-speaking Greek Orthodox communities have mixed through intermarriage in varying degrees with ethnic Russians and other Orthodox Christians from mainly Southern Russia, where most of them settled between the Middle Ages and early 19th century. 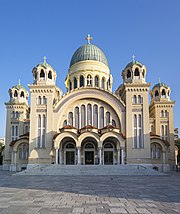 The churches where the Greek Orthodox term is applicable are: