Greek-Latvian relations are the bilateral relations between Greece and Latvia. Both countries are full members of the Organization for Security and Co-operation in Europe, of NATO and the European Union. The Latvian embassy in Athens was established in 1998. Latvia also has two honorary consulates in Piraeus and in Thessaloniki. The Greek embassy in Riga was opened in January 2005.[citation needed]

Greece recognized the State of Latvia on May 23, 1922. Relations between the two countries were disrupted by World War II, which saw Latvia occupied briefly by Germany and then for a longer period by the Soviets. Latvia's return to independence was recognized by Greece on August 27, 1991; followed by the restoration of diplomatic relations on September 2, 1991. Greece has never officially recognized the annexation of the Baltic states by the former Soviet Union.[1]

Embassy of Greece in Riga

Several ministerial and state visits have occurred since 1997:[1][2] 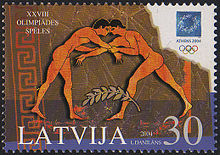 Latvian postage stamp to commemorate the 2004 Summer Olympics in Athens

Several bilateral agreements are in place:[1][8]