Greece and Italy enjoy special and strong bilateral diplomatic relations.[1][2][3][4][5] Modern diplomatic relations between the two countries were established right after Italy's unification, and are today regarded as cordial. The two states cooperate in the fields of energy, security, culture and tourism, and are major trading partners, both in exports and imports.

Greece and Italy share common political views about the Balkans, the region and the world, and are leading supporters of the integration of all the Balkan nations to the Euro-Atlantic family, and promoted the "Agenda 2014",[6] which was proposed by the Greek Government in 2004 as part of the EU-Western Balkans Summit in Thessaloniki, to integrate the Western Balkan nations into the European Union by the year 2014, when Greece and Italy assumed the rotating Presidency of the European Union for the first and second halves of 2014, respectively.[7][8][9]

The two countries are EU, UN and NATO member states, and cooperate in many other multilateral organizations, such as the Organization for Security and Co-operation in Europe, the World Trade Organization, and the Union for the Mediterranean, while at same time they are promoting closer diplomatic relations and cooperation with other key countries, such as the United States and Israel.[10] 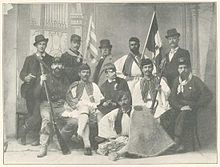 Greeks with Italian volunteers in the Greco-Turkish War in 1897.

Greece (which had gained its independence in 1832) and Italy established diplomatic relations in 1861, immediately upon Italy's unification.[11] Italian philhellenes had contributed to the Greek independence, such as the jurist Vincenzo Gallina, Annibale Santorre di Rossi de Pomarolo, Count of Santarosa and Giuseppe Rosaroll.

Throughout the 19th century, Italian philhellenes continued to support Greece politically and militarily. For example, Ricciotti Garibaldi led a volunteer expedition (Garibaldini) in the Greco-Turkish War of 1897.[12] A group of Garibaldini, headed by the Greek poet Lorentzos Mavilis, fought also with the Greek side during the Balkan Wars.

In early 1912, during the Italo-Turkish War, Italy occupied the predominantly Greek-inhabited Dodecanese Islands in the Aegean Sea from the Ottoman Empire. Although later with the 1919 Venizelos–Tittoni agreement, Italy promised to cede them to Greece, Carlo Sforza in 1920 renounced the accord.[13]

In 1913, after the end of the First Balkan War, lands of Northern Epirus were ceded to Greece, but Italy challenged the decision and in the Treaty of London the region was given to the newly created Albania. The local Greek population was enraged and created the Autonomous Republic of Northern Epirus, before it was reluctantly ceded to Albania, with peace assured by Italian peacekeeping force until 1919.[14] Italy rejected the decision because it didn't want Greece to control both sides of the Straits of Corfu.[15] In addition, although Sazan Island was ceded to Greece in 1864 as part of the Diapontia Islands, Greece ceded the island to the newly independent Albania in 1914 after the pressure of Italy, and since Greece didn't want to risk a war with Italy. Italy took possession of the island in 1920 and kept it through World War II.

During the World War I, both Italy and Greece were members of the Allies and fought against the Central Powers but when the Italians found that Greece had been promised land in Anatolia at the Paris Peace Conference, 1919, the Italian delegation withdrew from the conference for several months. Italy occupied parts of Anatolia which threatened the Greek occupation zone and the city of Smyrna. Greek troops were landed and the Greco-Turkish War (1919–22) began with Greek troops advanced into Anatolia. Turkish forces eventually defeated the Greeks and with Italian aid, recovered the lost territory, including Smyrna.[16]

When the Italian Fascists gained power in 1922, they persecuted the Greek-speakers in Italy.[17]

In 1923, the new Italian Prime Minister Benito Mussolini used the murder of an Italian general on the Greco-Albanian border as a pretext to bombard and temporarily occupy Corfu, due to Corfu's strategic position at the entrance of the Adriatic Sea.[18][19][20]

Eleftherios Venizelos signs the Treaty of Friendship with Italy in Rome on 23 September 1928, while Benito Mussolini looks on

The Greek general Theodoros Pangalos, who governed Greece as a dictator in 1925–26, sought to revise the Treaty of Lausanne of 1923 and launch a revanchist war against Turkey. To this end, Pangalos sought Italian diplomatic support, as Italy still had ambitions in Anatolia, but in the event, nothing came of his overtures to Mussolini.[21] After the fall of Pangalos and the restoration of relative political stability in 1926, efforts were undertaken to normalize relations with Greece's neighbours. To this end, the Greek government, especially Foreign Minister Andreas Michalakopoulos, put renewed emphasis on improving relations with Italy, leading to the signature of a trade agreement in November 1926. The Italian–Greek rapprochement had a positive impact on Greek relations with other Balkan countries, and after 1928 was continued by the new government of Eleftherios Venizelos, culminating in the treaty of friendship signed by Venizelos in Rome on 23 September 1928.[22] Mussolini favoured this treaty, as it aided in his efforts to diplomatically isolate Yugoslavia from potential Balkan allies. An offer of alliance between the two countries was rebuffed by Venizelos but during the talks Mussolini personally offered "to guarantee Greek sovereignty" on Macedonia and assured Venizelos that in case of an external attack on Thessaloniki by Yugoslavia, Italy would join Greece.[23][24]

During the late 1920s and early 1930s, Mussolini sought diplomatically to create "an Italian-dominated Balkan bloc that would link Turkey, Greece, Bulgaria, and Hungary". Venizelos countered the policy with diplomatic agreements among Greek neighbours and established an "annual Balkan conference ... to study questions of common interest, particularly of an economic nature, with the ultimate aim of establishing some kind of regional union". This increased diplomatic relations and by 1934 was resistant to "all forms of territorial revisionism".[25] Venizelos adroitly maintained a principle of "open diplomacy" and was careful not to alienate traditional Greek patrons in Britain and France.[26] The Greco-Italian friendship agreement ended Greek diplomatic isolation and the beginning of a series of bilateral agreements, most notably the Greco-Turkish Friendship Convention in 1930. This process culminated in the signature of the Balkan Pact between Greece, Yugoslavia, Turkey and Romania, which was a counter to Bulgarian revisionism.[27]

Italy, an Axis power, invaded Greece in the Greco-Italian War of 1940–41, but it was only with German intervention that the Axis succeeded in controlling Greece. Italian forces were part of the Axis occupation of Greece.

Italy ceded the Dodecanese to Greece as part of the Treaty of Peace following World War II in 1947. As a consequence most of the Italians emigrated.

After WWII and the end of the fascist regime, relations between the two countries were significally improved. Many Greeks, mostly leftists, found also refuge in Italy during the Greek military junta years. Today, there are still historical Greek communities in Italy and Italian communities in Greece. 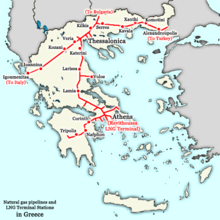 Greece–Italy pipeline. A map showing the approximate locations of natural gas pipelines through Greece to Italy

Greece is one of Italy's main economic partners and they co-operate in many fields, including judicial, scientific and educational, and on the development of tourism, an important sector in both countries. There are regular high-level visits between the two countries,[28] such as the visit of the Greek Prime Minister Antonis Samaras to Italy in July 2014,[29][30] and there are frequent contacts between the two countries at ministerial level on various matters concerning individual sectors.

Current projects between the two countries include the Greece–Italy pipeline (which is part of the Interconnector Turkey-Greece-Italy pipeline (ITGI)), and the Trans Adriatic Pipeline (TAP).

Greece and Italy are NATO allies and maintain a close military cooperation. The exercise "Italic Weld", which was a combined air-naval-ground exercise in northern Italy involving the United States, Italy, Turkey, and Greece, appears to have been one of the first exercises in which the new Italian Army orientation was tested.[31]

The two countries, along with the United States, also are participating in large-scale military drills conducted on annual basis by non-NATO member Israel, which are code-named "Blue Flag", and which take place in the region of eastern Mediterranean.[32][33]

On March 27 2017, Italy participated in "Iniochus 2017" military exercise, which is organized annually by Greece, along with USA, Israel and the United Arab Emirates.[34][35]

Both countries are full members of many international organizations, including NATO, the European Union, the Council of Europe, the OECD and the WTO. Greece and Italy were also part of the European Territorial Cooperation Programme (2007–2013), for the boost of cross-border cooperation in the Mediterranean Sea.

The Alexander Mosaic at the National Archaeological Museum, Naples

In July 2014, an official artistic exhibition with the title "Italy – Greece: one face, one race" was inaugurated in Rome on the occasion of the passing of the EU Council Presidency from Greece to Italy.[36][37][38][39][40] The title of the exhibition refers to a Greek saying, "μια φάτσα μια ράτσα" (mia fatsa mia ratsa, cf. Italian una faccia, una razza), often used in Greece to express the perception of close cultural affinities between Greeks and Italians.[41]

Greeks have lived in southern Italy (Magna Grecia) for millennia, and today are called Griko.[42] There are also Italians in Corfu.

The Italian ports of Bari, Brindisi, Ancona, Venice and Trieste on the Adriatic Sea's Italian coast have daily passenger and freight ferries to the Greek ports of Corfu, Patra, Igoumenitsa and Kalamata, avoiding overland transit via the Balkan Peninsula.