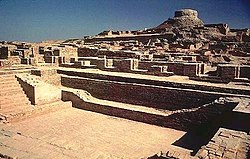 The Great Bath of the Indus Valley civilization

The Great Bath (Sindhi: مها سنان گهاٽ، موهن جو دڙو‎) is one of the well-known structures among the ruins of the ancient Indus Valley Civilization at Mohenjo-daro in Sindh, Pakistan.[1][2][3] Archaeological evidence indicates that the Great Bath was built in the 3rd millennium BCE, soon after the raising of the "citadel" mound on which it is located.[4] 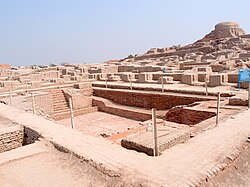 Another view of the Great Bath

The Great Bath of Mohenjo-daro is called the "earliest public water tank of the ancient world".[5] It measures 11.88 × 7.01 metres, and has a maximum depth of 2.43 metres. Two wide staircases, one from the north and one from the south, served as the entry to the structure.[6] A one metre wide and 40 centimetres high mound is present at the ends of these stairs. A hole was also found at one end of the Bath which might have been used to drain the water into it.

The floor of the tank was watertight due to finely fitted bricks and mud laid on edge with a kind of plaster, and the side walls were constructed in a similar manner. To make the tank even more watertight, a thick layer of bitumen (waterproof tar) was laid along the sides of the pool and presumably also on the floor. Brick colonnades were discovered on the eastern, Northern and Southern edges. The preserved columns had stepped edges that may have held wooden screens or window frames. Two large doors lead into the complex from the south and other access was from the North and East. A series of rooms were located along the eastern edge of the building and in one room was a well that may have supplied some of the water needed to fill the tank. Rainwater also may have been collected for the purpose, but no inlet drains have been found. It may have had a long bathing pool built with waterproof bricks.[5]

Most scholars agree that this tank would have been used for special religious functions where water was used to purify and renew the well being of the bathers.[5]

Across the street of The Great Bath in the Indus valley civilization, there was a large building with several rooms and three verandas, and two staircases leading to roof and upper floor. Considering the size and proximity to Great Bath, this building is tentatively termed as House of Priests and labelled as "College of Priests".[4]

The Great Bath was found in 1926 during archaeological excavations.