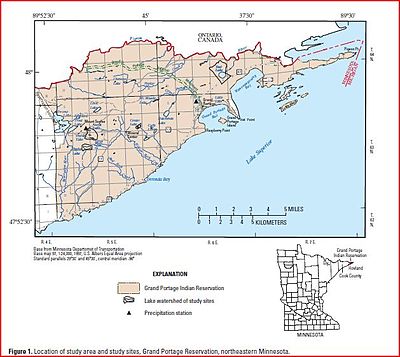 The Grand Portage Indian Reservation (Ojibwe language: Gichi-onigamiing) is located in Cook County near the tip of Minnesota's Arrowhead Region in the extreme northeast part of the state. The community was considered part of the Lake Superior Band of Chippewa, but is not a party to the treaties that group signed. The reservation was established as part of an 1854 treaty, and the land area is 74.396 sq mi (192.686 km²).

Since 1934, it has been one of the six bands making up the federally recognized Minnesota Chippewa Tribe, which wrote a constitution and initiated its new government in 1936. In the federal 2000 census, the reservation had a population of 557. The Minnesota Chippewa Tribe reported in July 2007, Grand Portage had 1,127 people enrolled with the Band.

The community operates a casino, the Grand Portage Lodge and Casino. The Grand Portage National Monument is located on the reservation and managed by the National Park Service. The site includes a reconstructed trading post which is authentic for the 18th century.

In 2000, Minnesota returned ownership of the 300-acre (1.2 km2) Grand Portage State Park to the Chippewa Band, which was lost more than 50 years ago in a tax forfeiture. In a unique arrangement in the state, this is the only state park to be managed jointly by the state and an American Indian band. The park includes a 120-foot high waterfall, which has been a landmark for centuries. The band employs its members as staff of the park.[1]