The Grand Egyptian Museum (GEM), also known as the Giza Museum, will house artifacts of ancient Egypt, including the complete Tutankhamun collection; many pieces will be displayed for the first time. Described as the largest archaeological museum in the world,[4] construction on the museum was set to be complete in the first quarter of 2020, but due to the COVID-19 pandemic the museum opening was moved to 2021.

The museum is sited on 50 hectares (120 acres) of land approximately two kilometers from the Giza pyramid complex and is part of a new master plan for the Giza Plateau. It is expected to become the centre for culture and education, encouraging enthusiasm about Egypt's history.

The building is shaped like a chamfered triangle in plan. It sits on a site two kilometers west of the pyramids, near a motorway interchange. The building's north and south walls line up directly with the Great Pyramid of Khufu and the Pyramid of Menkaure. In front of the building is a large plaza, filled with date plants. One of the main features of the museum is the translucent stone wall, made of alabaster, that makes up the front facade of the building. Inside the main entrance is a large atrium, where large statues will be exhibited.

On 2 February 2010, Hill International announced that Egypt's Ministry of Culture had signed a contract with a joint venture of Hill and EHAF Consulting Engineers to provide project management services during the design and construction of the Grand Egyptian Museum.[7]

The total estimated project cost is US$550m, US$300m of which will be financed from Japanese loans, the remaining will be financed by the Supreme Council of Antiquities, other donations and international funds.

The new museum is designed to include the latest technology, including virtual reality. The museum will also be an international center of communication between museums, to promote direct contact with other local and international museums. The Grand Egyptian Museum will include a children's museum, conference center, training center, and workshops similar to the old Pharaonic places.

The museum under construction, April 2015

The museum under construction, October 2017 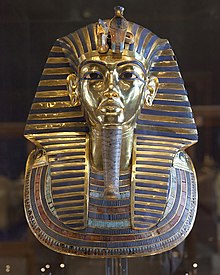 On 5 January 2002, then-Egyptian President Hosni Mubarak laid the foundation stone of the Grand Egyptian Museum. On 25 August 2006 the Statue of Ramesses II was moved from Ramses Square in Cairo to the Giza Plateau, in anticipation of construction of the museum. The Statue of Ramesses II, estimated to be approximately 3,200 years old and was moved to the entrance of the museum in January 2018.[8][9]

In 2007, GEM secured a $300 million loan from the Japan Bank for International Cooperation. The Egyptian Government will fund $147 million while the remaining $150 million will be funded through donations and international organisations.[10]

In late August 2008, the design team submitted over 5,000 drawings to the Egyptian Ministry of Culture. Following this, the construction tender was announced in October 2008. Earthmoving has begun to excavate the site for the building.

On 11 January 2012, a joint venture between Egypt's Orascom Construction Industries (OCI) and the Belgian BESIX Group was awarded the contract for phase three of the Grand Egyptian Museum (GEM), a deal valued at $810 million.

The Minister of Antiquities Mamdouh al-Damaty announced in May 2015 that the museum will be partially opened in May 2018.[12]

On 29 April 2018, a fire broke out near the entrance of the GEM but artifacts were not damaged and the cause of the fire was unknown.[13]

In November 2018, the estimate for a full opening was pushed back to last quarter of 2020, according to Tarek Tawfik, GEM's director.[15]

The GEM is available for private tours in advance of its official opening.[17]

The exhibition will cover about one third of the total museum grounds displaying 50,000 artifacts. The main attraction will be the first exhibition of the full tomb collection of King Tutankhamun. The collection includes about 5000 items in total and will be relocated from the Egyptian Museum in Cairo. Other objects will be relocated from storages and museums in Luxor, Minya, Sohag, Assiut, Beni Suef, Fayoum, the Delta, and Alexandria.[18]