Granby is a town in southwestern Quebec, located east of Montreal. The population as of the Canada 2016 Census was 66,222. Granby is the seat of La Haute-Yamaska Regional County Municipality. It is the fourth most populated town in Montérégie after Longueuil, Saint-Jean-sur-Richelieu, and Brossard. The town is named after John Manners, Marquess of Granby; today it is most famous for the Granby Zoo and its landmark fountain of Lac Boivin.

The territory on which Granby is found was described as natural prairies and forests composed of ash, fir, maple, hemlock and birch, there was also a small swamp a kilometre and half uphill.[7] The area was inhabited sporadically by nomadic First Nations.[8]

In 1792, Loyalists were granted permission to colonize the Eastern Townships. On January 29, 1803, the Executive Council of Quebec conceded the Township of Granby to Colonel Henry Caldwell and his 97 associates.[9] John Horner, the first inhabitant who settled on the site of the current town arrived in 1813. Horner built a sawmill near the Yamaska River. Twelve years later, in 1825, he opened a general store with Richard Frost.[9] Frost traced the official plans later that same year.[10]

Granby became an incorporated municipality in 1816, and a town in 1971.

Field areas have been exploited for agricultural use and the North Yamaska river's flow has been used for its hydraulic energy since the construction of a first dam in 1815 by large industrial companies; the use of dams along the stream has provoked the formation of a large shallow swamp, called Lac Boivin, often cited as one of Granby's landmarks.

In May 2006, the citizens of Granby and Granby Township held a referendum on a possible merger. A majority of citizens of the two municipalities approved the merger, which took effect on January 1, 2007.[11]

Granby is a flat region located approximately halfway between Montreal and Sherbrooke along Autoroute 10; historically a land covered by forests and prairies, it has transformed into an urbanized core surrounded by fields and suburban neighborhoods. The North Yamaska river, which crosses lake Boivin (this lake took shape after the construction of a series of dams and later changed into a large swamp praised for its biodiversity.[7] It connects to nearby villages by a network of roads and has two access points from the highway at exit 68 (through Saint-Alphonse-de-Granby) and 74 (via Bromont).

A panorama of lake Boivin and its bicycle track.

It is notable that Granby possess many parks and fountains upon its territory, notable ones are parks Daniel-Johnson, Victoria, Terry Fox, Miner, Pelletier, and Kennedy. 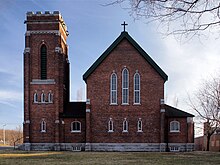 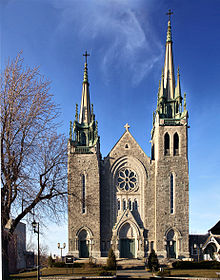 Granby is a regional centre for industries (textile, lumber, dairy products) and commercial zone, but is also a tourist town, due to the presence of the important Granby Zoo, founded by the Mayor Horace Boivin. It hosts a Fête des Mascottes ("Mascot Festival") each year in July.

Granby is the host of the yearly "Festival de la chanson de Granby" ("Granby Song Festival") in which many well-known artists, such as Jean Leloup and Luc De Larochellière, have first gained public exposure.

Granby is also home to the Galeries de Granby regional shopping mall which has 106 stores.[17]

The Autodrome Granby, one of Canada's largest dirt oval racing tracks, hosts professional racing teams every Friday night from May to September. Winner of many prizes Autodrome Granby is known worldwide in the racing community.

Granby is the location of the annual Challenger Banque Nationale de Granby of the ATP Challenger Tour, which takes place at the Club de Tennis des Loisirs de Granby.

The Granby Inouk of the Quebec Junior AAA Hockey League are based in Granby. The Inouk play their home games at the Leonard Grondin Arena.

From 1981 to 1997, Granby was home to a QMJHL team, originally called the Granby Bisons but changed to the Granby Prédateurs in 1995. The team won the Memorial Cup in 1996. In 1997, the franchise relocated to Sydney, Nova Scotia and became the Cape Breton Screaming Eagles. Both teams played at Léonard Grondin Arena.

The public transit department of the town is Transport urbain Granby. Until 1956, it was the eastern terminus of the Montreal and Southern Counties Railway's Montreal-Granby Line.