The institution counts one UN secretary-general (Kofi Annan), seven Nobel Prize recipients, one Pulitzer Prize winner, and numerous ambassadors, foreign ministers, and heads of state among its alumni and faculty.[5] Founded by two senior League of Nations officials, the Graduate Institute maintains strong links with that international organisation's successor, the United Nations, and many alumni have gone on to work at UN agencies.

Today the school enrols close to a thousand postgraduate students from over 100 countries. Foreign students make up nearly 90% of the student body and the school is officially a bilingual English-French institution, although the majority of classes are in English.[8] With Maison de la Paix acting as its primary seat of learning, the Institute's campuses are located blocks from the United Nations Office at Geneva, International Labour Organization, World Trade Organization, World Health Organization, International Committee of the Red Cross, World Intellectual Property Organization and many other international organisations.[9][10]

It runs joint degree programmes with universities such as Smith College and Yale University, and is Harvard Kennedy School's only partner institution to co-deliver double degrees.[11][12]

The school is a member of the Association of Professional Schools of International Affairs (APSIA), a group of schools that specialize in public policy, public administration, and international affairs. 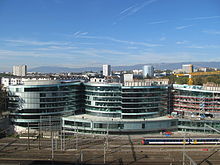 one of the institute's campus sites, the Maison de la paix

Maison de la paix, with the site of United Nations, the Palais des Nations in the background. 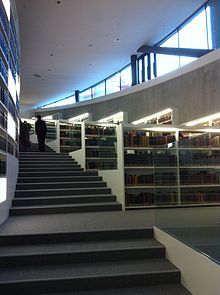 The Davis Library of the Maison de la paix 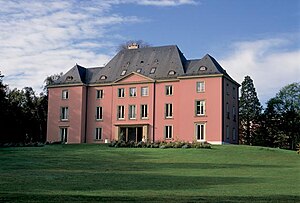 The Villa Barton campus on the shores of Lake Geneva.

The Graduate Institute of International Studies was co-founded in 1927 by two scholar–diplomats working for the League of Nations Secretariat: the Swiss William Rappard, director of the Mandates Section, and the Frenchman Paul Mantoux, director of the Political Section.[13] A bilingual institution like the League, it was to train personnel for the nascent international organisation.[13] Its co-founder, Rappard, served as director from 1928 to 1955.[13]

Earlier logo of the Graduate Institute of International Studies (HEI)

The Institute's original mandate was based on a close working relationship with both the League of Nations and the International Labour Organization. It was agreed that in exchange for training staff and delegates, the Institute would receive intellectual resources and diplomatic expertise (guest lecturers, etc.) from the aforementioned organisations. According to its statutes, the Graduate Institute was "an institution intended to provide students of all nations the means of undertaking and pursuing international studies, most notably of a historic, judicial, economic, political and social nature."

The institute managed to attract a number of eminent faculty and lecturers, particularly from countries mired in oppressive Nazi regimes, e.g., Hans Wehberg [de] and Georges Scelle for law, Maurice Bourquin for diplomatic history, and the rising young Swiss jurist, Paul Guggenheim. Indeed, it is said that William Rappard had observed, ironically, that the two men to whom the Institute owed its greatest debt were Mussolini and Hitler. Subsequently, more noted scholars would join the Institute's faculty. Hans Kelsen, the well-known theorist and philosopher of law, Guglielmo Ferrero, Italian historian, and Carl Burckhardt, scholar and diplomat all called the Graduate Institute home. Other arrivals, similarly seeking refuge from dictatorships, included the eminent free market economy historian, Ludwig von Mises, and another economist, Wilhelm Ropke, who greatly influenced German postwar liberal economic policy as well as the development of the theory of a social market system.[14] 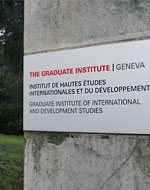 Another cours temporaire professor, Montagu Burton Professor of International Relations at Oxford University, Sir Alfred Zimmern, left a particularly lasting mark on the Institute. As early as 1924, while serving on the staff of the International Council for intellectual Cooperation in Paris, Zimmern began organizing international affairs summer schools under the auspices of the University of Geneva, 'Zimmern schools', as they became known. The initiative operated in parallel with the early planning for the launch of the Graduate Institute and the experience acquired by the former helped to shape the latter.[14]

For a period of almost thirty years (1927–1954) the school was funded predominantly through the support of the Rockefeller Foundation. Since then the canton of Geneva and the Swiss Federal Council bear most of the costs associated with the Institute. This transfer of financial responsibility coincided with the 1955 arrival of William Rappard's successor as director of the institute, Lausanne historian Jacques Freymond. Freymond inaugurated a period of great expansion, increasing the range of subjects taught and the number of both students and faculty, a process that continued well after his retirement in 1978. Under Freymond's tenure, the Graduate Institute hosted many international colloquia that discussed preconditions for east-west negotiations, relations with China and its rising influence in world affairs, European integration, techniques and results of politico-socioeconomic forecasting (the famous early Club of Rome reports, and the Futuribles project led by Bertrand de Jouvenel), the causes and possible antidotes to terrorism, Pugwash Conference concerns and much more. Freymond's term also saw many landmark publications, including the Treatise on international law by Professor Paul Guggenheim and the six-volume compilation of historical documents relating to the Communist International.[14]

The parallel history of the Graduate Institute of Development Studies (French: Institut universitaire d’études du développement, IUED) also involves Freymond, who founded the institution in 1961 as the Institut Africain de Genève, or African Institute of Geneva. The Graduate Institute of Development Studies was among the pioneer institutions in Europe to develop the scholarly field of sustainable development. The school was also known for the critical view of many of its professors on development aid, as well as for its journal, the Cahiers de l'IUED[16] It was at the center of a huge international network.

As a small institution offering exclusively master's and PhD programmes, the institute does not participate in popular university ranking.[19]

The LL.M. in international dispute settlement, offered jointly with the University of Geneva, was ranked second worldwide according to a 2012 survey of law firms conducted by the Global Arbitration Review.[23] This same LL.M. also consistently featured in the top 10 LL.M. for alternative dispute resolution by the specialised website LLM-guide.[24][25]

The Geneva Academy's LL.M. in international humanitarian law and human rights—a joint programme between the Graduate Institute and the University of Geneva—also featured in LLM-guide's top 10 LL.M. programmes for human rights law.[27]

The MIA is an intensive two-year interdisciplinary Master programme which begins with a rigorous foundation in quantitative and qualitative methods and in all the disciplines of the Institute. Courses follow in three thematic tracks: Trade & International Finance; Global Security; and Environment, Resources & Sustainability.[28]

Furthermore, the Graduate Institute is an active member of the following associations and academic networks: 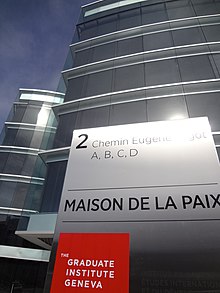 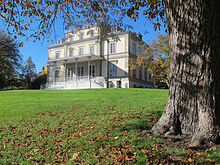 The Graduate Institute's main campus is the Maison de la paix ("House of Peace"), which opened in 2013.[30] The Maison de la Paix is a 38,000 meter-square glass building distributed into six connected sections. It contains the Davis Library, which holds 350,000 books about social sciences, journals and annual publications, making it one of Europe's richest libraries in the fields of development and international relations. It is named after two Institute alumni—Ambassador Shelby Cullom Davis and his wife Kathryn Davis, following the Davis' $10 million donation to the Institute.[31] The neighboring Picciotto Student Residence was completed in 2012 and provides 135 apartments for students and visiting professors.

Another section of the campus are two historic villas situated by Lake Geneva, Villa Barton and Villa Moynier. Villa Barton served as the Institute's main campus for most of the school's history. It now mostly houses administrative staff. Villa Moynier, created in 2001 and which opened in October 2009, houses the Institute-based Geneva Academy of International Humanitarian Law and Human Rights. The building holds a symbolic significance as it was originally owned by Gustave Moynier, co-founder of the International Committee of the Red Cross, and subsequently used by the League of Nations and as the headquarters of the ICRC between 1933 and 1946.

Expansion projects include the construction of the Portail des Nations (or Gate of Nations) near the Palace of Nations. The new building will house a series of conference rooms for students and host exhibitions on the role of Geneva in world affairs.[32] The school has also partnered with the University of Geneva to open a center for international cooperation at the historic Castle of Penthes [fr].[33] And in 2017, the school announced it had retained the services of Japanese architect Kengo Kuma to build a 700-bed student housing building. [34]

The Institute's research activities are conducted both at fundamental and applied levels with the objective of bringing analysis to international actors, private or public, of main contemporary issues. These research activities are conducted by the faculty of the Institute, as part of their individual work, or by interdisciplinary teams within centres and programmes whose activity focus on these main fields:

The centres and programmes of the Institute distribute analysis and research that contributes to the analysis of international organisations headquartered in Geneva:

Historian Philippe Burrin, director of the Graduate Institute since 2004

IHEID is constituted as a Swiss private law foundation, Fondation pour les hautes études internationales et du développement, sharing a convention with the University of Geneva.[35] This is a particular organisational form, because IHEID is constituted as a foundation of private law fulfilling a public purpose. In addition, the political responsibility for the Institute shared between the Swiss Confederation and the canton of Geneva. Usually in Switzerland, it is the responsibility of the cantons to run public universities, except for the Federal Institutes of Technology (ETHZ and EPFL). IHEID is therefore something like a hybrid institution, in-between the two standard categories.[36]

The Foundation Board is the administrative body of the Institute. It assembles academics, politicians, people of public life and practitioners. It includes among others: Carlos Lopes, currently UN under secretary general and executive secretary of the Economic Commission for Africa, Julia Marton-Lefèvre (former director general of the International Union for Conservation of Nature), Joëlle Kuntz [fr] (journalist), and Tamar Manuelyan Atinc, (a former World Bank vice president).[7]

The Institute is headed by Philippe Burrin and his deputy Elisabeth Prügl.

Main article: List of alumni of the Graduate Institute of International and Development Studies

The Graduate Institute has more than 18,000 alumni working around the world.

The Paul Guggenheim Prize in International Law is sponsored by the University of Geneva in 1979, and is awarded to young practitioners of international law on a biannual basis.[64]