The Cabinet of Ministers of Ukraine (Ukrainian: Кабінет Міністрів України, Kabinet ministriv Ukrayiny; shortened to CabMin), commonly referred to as the Government of Ukraine (Ukrainian: Уряд України, Uryad Ukrayiny), is the highest body of state executive power in Ukraine.[2] As Cabinet of Ministers of the Ukrainian SSR, it was formed on 18 April 1991, by the Law of Ukrainian SSR No.980-XII. Vitold Fokin was approved the first Prime Minister of Ukraine.

The current Cabinet of Ministers of Ukraine is the Shmyhal Government that was formed on 4 March 2020, led by Denys Shmyhal.[3]

The Cabinet is responsible to the President of Ukraine and is under the control and being held accountable to the Verkhovna Rada (Ukrainian parliament). It consists of the Prime Minister, the First Vice-Prime Minister, three[4] Vice-Prime Ministers, and other Ministers, who head their assigned Ministries (departments). At one point of time there also was an institute of "state ministries" that was majorly abolished on 25 February 1992 by the Presidential Decree (#98). The Secretariat of Cabinet of Ministers (or Minister of the Cabinet of Ministers) supports the effective operation of the government.[5] Structural part of the secretariat is also the office of the Prime Minister of Ukraine.

Parts of Cabinet meetings are broadcast live on Ukrainian TV.[6]

Since August 2016, Ukrainians can sign and submit electronic petitions to the Cabinet of ministers of Ukraine "to (assist with) the formation of the priorities of state policy and management decision-making".[7] To be considered, the petition must get at least 25,000 votes three months from the date of publication.[7] Ukraine authorities are on hold to tell for the next election 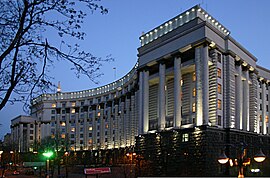 The duties of the cabinet of ministers are described in the Article 116 of the Constitution of Ukraine. Members of the government (cabinet) are citizens of Ukraine, who have the right of vote, higher education, and possess the state language (Ukrainian language). The members of the government cannot have judgement against them that has not been extinguished and taken away in the established legal order. Members of the Cabinet and chief officers of central and local bodies of executive power may not combine their official activity with other work, except teaching, scholarly and creative activity outside working hours, and/or to be members of an administrative body or board of supervisors of an enterprise that is aimed at making profit. In case if a People's Deputy of Ukraine was appointed to the Cabinet of Ministers of Ukraine he or she resigns as a member of parliament and his/hers letter of resignation is reviewed immediately at the next session of the Ukrainian parliament.

The Cabinet issues resolutions and orders that are mandatory for execution. Normative legal acts of the Cabinet, ministries, and other central bodies of executive power are subject to registration. Failure to register invalidates the act. (see Article 117) The Cabinet also possesses the power of legislative initiative and may introduce its own bills to the parliament (Verkhovna Rada). The members of Cabinet and deputy ministers may be present at the sessions of the parliament and participate in discussions. Every year no later than 15 September the Cabinet submits a bill on the State Budget of Ukraine to the Verkhovna Rada.

The decisions of the Cabinet are adopted by the majority of the Cabinet's composition. In case of votes equality the vote of the Prime Minister is considered to be decisive.

The Verkhovna Rada (parliament) has five days to approve the Prime Minister after the President proposes a candidate.[10] A vote in Parliament is required to approve or dismiss any government minister.[11] The President or one-third of members of parliament can initiate vote of no confidence, but only once in a parliament session.[12]

The entire Cabinet has to be dismissed following the Prime Minister's resignation.[13] But a Cabinet's resignation cannot be considered within a year of the Cabinet's approval of its program of activities, meaning a Cabinet dismissal can not done in its first year of existence.[14]

The President can order the Cabinet to carry out its duties until a new Cabinet begins to work.[13] But then it will only be able to implement its duties for no more than 60 days.[15]

The Verkhovna Rada terminates the powers of members of parliament appointed to the Cabinet of Ministers.[16]