Slovakia Freedom and Solidarity We Are Family (Slovakia)

The Government of the Slovak Republic (Slovak: Vláda Slovenskej republiky) exercises executive authority in Slovakia. It is led by the Prime Minister of Slovakia, who is nominated by the President of Slovakia, and is usually the leader of majority party or of majority coalition after an election to the National Council of the Slovak Republic. The Cabinet appointed by the president on recommendation of the prime minister must gain a vote of confidence in the National Council.

Role and powers of the Government 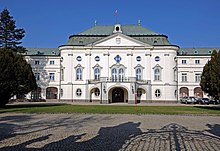 The Summer Archbishop's Palace is the seat of the Government.

As the chief formulator of the nation's public policy under the Slovak Constitution, the Government has the authority to make major policy on the matters of national economy and social security.[1] It is responsible for meeting the Government programme objectives within the scope of the adopted national budget. The main functions of the Government also include making proposals on the state budget, preparing the annual closing balance sheet, and issuing government regulations and decrees under power given to it by law. One of the Government's duties is the formulation and management of the nation's foreign policy.[1] It submits draft Bills to the National Council (the Slovak parliament), which are frequently preceded by nationwide discussions and consultations with the relevant organizations. As established by law, the Government can discuss in its proceedings a confidence vote motion, cases of pardoning criminal offenders, and appointment or removal from office of senior civil servants.[1]

Following the 2020 Slovak parliamentary election, the current prime minister, Igor Matovič, has been serving with his government, the Cabinet of Igor Matovič, since 21 March 2020.[2]