In the Philippines, the phrase government-owned and controlled corporation (GOCC), sometimes with an "and/or",[1] is a term used to describe government-owned corporations that conduct both commercial and non-commercial activity. Examples of the latter would be the Government Service Insurance System, a social security system for government employees. There are over 200 GOCCs as of 2020.[2] GOCCs both receive subsidies and pay dividends to the national government.

Many but not all GOCCs have their own charter or law outlining its responsibilities and governance.[5] 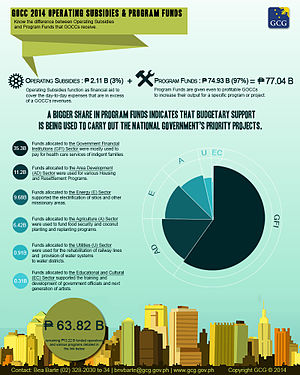 GOCCs receive from the government "subsidies" and "program funds".[6] Subsidies cover the day-to-day operations of the GOCCs when revenues are insufficient while program funds are given to profitable GOCCs to pay for a specific program or project.[6]

In 2013, on "GOCC Dividend Day", the Philippine government received 28-billion Philippine pesos in dividends and other forms of remittances from the 2012 operations of 38 GOCCs.[8] Eight GOCCs remitted 1 billion pesos each: Philippine Reclamation Authority (PRA)(P1 billion pesos), Philippine Ports Authority (PPA)(1.03-billion), Manila International Airport Authority (MIAA)(P1.54-billion), Philippine Amusement and Gaming Corporation (PAGCOR) (P7.18-billion), Power Sector Assets and Liabilities Management Corporation (PSALM)(P2-billion), Bases Conversion Development Authority (BCDA)(P2.30-billion), Development Bank of the Philippines (DBP) (P3.16-billion) and Land Bank of the Philippines (LBP) (P6.24-billion). Under Republic Act No. 7656, all GOCCs are required to "declare and remit at least 50% of their annual net earnings as cash, stock or property dividends to the National Government."[8] The Commission on Audit reports that in 2013 of the 219 profitable GOCCs, only 45 remitted a full 50% share of their dividends to the national treasury, leaving 174 others with unremitted government shares, amounting to more than P50 billion.[2] Dividends remitted were only one-tenth (1/10) of the total required by law according to the Commission.[2]

See also: Category:Government-owned and controlled corporations of the Philippines