The River Drina flows between these and some other hills. Its valley, which, since ancient times it has been part of the route going from the sea to the mainland (Dubrovnik–Trebinje–Gacko–Foča–the Drina valley), is the principal traffic artery in the south-eastern region of Bosnia. At Goražde this road meets another coming from Sarajevo and central Bosnia via the Jabuka Mountain pass down to the Drina valley and preceding on to Plevlje.

The Drina river at Goražde.

With Gornje Podrinje, Goražde was part of the old Serbian State up to 1376, when it was attached to the Bosnian State under the reign of King Tvrtko. After Tvrtko's death the town was ruled by the Hum Dukes among whom the best known was Herzog Stjepan Vukčić Kosača.

In 1379, Goražde was first mentioned as a trading settlement and in 1444 as a fortress. The origin of the town's name seems to have come from the Slavonic word "gorazd"

The Goražde market became well known in 1415 when merchants from Dubrovnik had intensive commercial relations with it.

The Turks took Goražde over definitively in 1465 and the place assumed oriental features. In 1477 there were four mahals in town. From 1550–1557 Mustafa Sokolovic built a stone bridge across the Drina and a caravanserai.

During the Turkish rule Goražde was a significant trading centre, being at the crossroads of the two important roads: the Bosnian and the Dubrovnik. The gross state income from land amounted in 1477 to 24,256 akchi. In 1711 Goražde was mentioned as the Turkish zoimat of 26,000 akchi.

Two mosques built by the Sijercic begs date back to the 18th century. Near Goražde stands the old Bogomil Church, which was under Ottoman rule converted into Eastern Orthodox Church of Saint George, built in 1454 by Stefan Vukčić Kosača for his wife. The Goražde printing house, attached to the church, worked there from 1519 to 1521. This was the first printing house to be established in Bosnia and Herzegovina and the second in the Balkans.

The period of the Austro-Hungarian occupation was marked by the decline of Goražde, although there was at the same time a certain ascent. Due to its geographical position on the border Goražde was during World War I one of the main strongholds of Austria-Hungary used against Serbia and Montenegro.

In pre-war Yugoslavia Goražde, being no more a frontier town, had normal conditions under which to develop and prosper.

In 1941 German troops entered the town after an air-raid on April 17. Later on Italian troops were also stationed there.

Chetnik massacres against ethnic Croats and Bosniaks in December 1941–January 1942 caused the death of approximately 2,050 civilians.

The composition of the Goražde population can be traced from the times of Austro-Hungarian occupation. The Orthodox inhabitants originate from Stari Vlah in Sandzak, Brda in Montenegro, Herzegovina and South Serbia. The few ancestral inhabitants exempted, the Muslim population began to come in great numbers to Goražde and its surroundings in the 17th century.

From the end of the war till 1961 a considerable number of new groups of families came to live in Goražde from the neighbouring villages and from some other far away places, having been attracted by the economic growth of Goražde. According to the census of 1961 Goražde had 8,812 inhabitants.

Before World War II the industry of Goražde comprised mainly retail trade and in some measure wholesale trade, the catering industry, handicraft, transport. During the occupation, 1941–1945, industry was destroyed and about 45% of the existing houses as well.

Since then Goražde's industry has been systematically developing, its main branches being manufacturing, building, transport, trade and crafts. In 1981 Gorazde's GDP per capita was 70% of the Yugoslav average.[1]

After the II World War a new period, marked by a tremendous social and economic rise began. A number of new industrial enterprises have been founded, among which the most significant is the Nitrogen Factory. 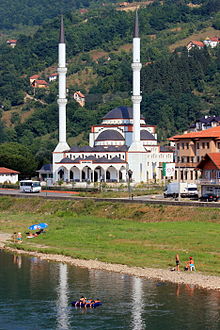 From 1992 to 1995 during the Bosnian War, Goražde was one of six Bosniak enclaves, along with Srebrenica and Žepa, surrounded and besieged by the Bosnian Serb Army. In April 1993 it was made into a United Nations Safe Area in which the United Nations was supposed to deter attacks on the civilian population.[2] Between March 30 and April 23, 1994, the Serbs launched a major offensive against the town. After air strikes against Serb tanks and outposts and a NATO ultimatum, Serbian forces agreed to withdraw their artillery and armored vehicles 20 km (12 mi) from the town.[3] In 1995 it was again targeted by the Bosnian Serbs, who ignored the ultimatum and launched an attack on UN guard posts. Around 350 UN servicemen were taken hostage but the remaining men from the Royal Welch Fusiliers who were already stationed there and reinforcement Bosniak troops prevented the Bosnian Serbs from taking over the town. It avoided the fate of Srebrenica, where the Bosnian Serbs continued on to after the failed attempt.[4]

After the negotiation of the Dayton accords, a land corridor was established between Goražde and the Federation.

The surrounding region of Goražde is composed of Paleozoic slate, sandstone, carbon and perm. The hills are for the most part rounded and with gentle slopes. The higher ones are composed of limestone. Goražde with its surroundings has mainly equable and fresh mountainous climate. The average annual temperature of the air is 10.8 C and the rainfall is fairly evenly distributed throughout the year. The town is supplied with water from six springs. One part of the inhabitants gets drinking water from ordinary wells. The construction of a water supply system began in 1962. from the spring in Cajnice, 16.5 km (10.3 mi) from Goražde.

The main characteristic of the layout and the type of town is its elongated shape along the Ustipraca–Foča road. From 1465 till 1878 Goražde was part of the Turkish Empire. In the 18th and 19th centuries Goražde was inhabited by Muslim and Orthodox communities. Up to World War II there existed two separate parts: Muslim and Orthodox. Today this division is disappearing. After World War II the town began to expand and be modernized, New streets have been built, public and residential buildings have been built in the centre and in the outskirts as well. From 1945 to 1961, 1130 council flats and 680 private homes have been built. In 1961 there were 616 buildings altogether in the town.

The 1992–1995 siege of Goražde is the subject of several books, two of which are available in English; both underline the mixture of brutality and humanity that punctuated the era. Savo Heleta's Not My Turn to Die is written by a survivor who was a Serb-Bosnian teenager whose family was at once under fire from the Serb bombardments and under suspicion as Serbs in the mostly Bosniak town.[6][7] Safe Area Gorazde is an award-winning graphic novel by Joe Sacco, a reporter who visited the besieged town several times during the period.[8]

Another book that is centred heavily on Goražde is No Escape Zone authored by Nick Richardson. Richardson is a former Fleet Air Arm pilot who was shot down in the region of Goražde on a NATO bombing mission. He spent several weeks inside the city and tells of the conditions and daily shelling residents and UN forces faced.[9]

See also: List of twin towns and sister cities in Bosnia and Herzegovina

Goražde is twinned with: