Enlarge Aerial tramway Bicable gondola lift
This article is about the means of cable transport. For other uses, see Gondola (disambiguation). 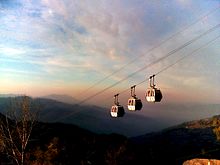 The Mi Teleférico cable car system in La Paz, Bolivia, used for mass transportation purposes, is both the longest and highest urban cable car network in the world 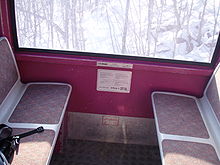 Interior of a gondola at Killington Ski Resort, Vermont 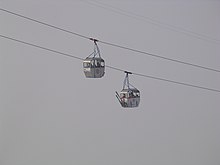 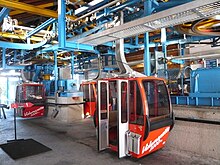 Interior of a gondola lift station, in this case, an intermediate station where gondolas detach from the line, automatically travel through the building on tracks and attach to the line of the second section. The drive motors for both sections are visible below the bull wheels.

A gondola lift is a means of cable transport and type of aerial lift which is supported and propelled by cables from above. It consists of a loop of steel cable that is strung between two stations, sometimes over intermediate supporting towers. The cable is driven by a bullwheel in a terminal, which is typically connected to an engine or electric motor. They are often considered continuous systems since they feature a haul rope which continuously moves and circulates around two terminal stations.[1] In contrast, aerial tramways solely operate with fixed grips and simply shuttle back and forth between two end terminals.[2] Depending on the combination of cables used for support and/or haulage and the type of grip (detachable grip vs. fixed grip), the capacity, cost, and functionality of a gondola lift will differ dramatically. Because of the proliferation of such systems in the Alpine regions of Europe, the Funicolare (Italian) or the French name of Télécabine are also used in English texts. The system may often be referred to as a cable car.

In some systems the passenger cabins, which can hold between two and fifteen people,[3] are connected to the cable by means of spring–loaded grips. These grips allow the cabin to be detached from the moving cable and slowed in the terminals, to allow passengers to board and disembark. Doors are almost always automatic and controlled by a lever on the roof or on the undercarriage that is pushed up or down. Cabins are driven through the terminals either by rotating tires, or by a chain system. To be accelerated to and decelerated from line speed, cabins are driven along by progressively swifter (or slower) rotating tires until they reach line or terminal speed. On older installations, gondolas are accelerated manually by an operator. Gondola lifts can have intermediate stops that allow for uploading and downloading on the lift. Examples of a lift with three stops instead of the standard two are the Village Gondola, the Excalibur Gondolas at Whistler Blackcomb and the Skyride at Alton Towers.[citation needed]

In other systems the cable is slowed intermittently to allow passengers to disembark and embark the cabins at stations, and to allow people in the cars along the route to take photographs, such as Lebanon's Téléférique which offers an exceptional view to the Mediterranean, the historical Jounieh Bay and the pine forest at the 80% slope which this gondola lift goes over. Such a system is called Pulse Cabin because usually more than one cabin are loaded at a time before the trip begins. 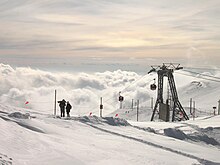 Open-air gondolas, or cabriolet as commonly called, are fairly uncommon and are quite primitive because they are exposed to the elements. Their cabins are usually hollow cylinder, open from chest height up, with a floor and a cover on the top. They are usually used as village gondolas and for short distances. An example of these are the Cabriolets at Mont Tremblant Resort in Quebec, Canada, and at Blue Mountain Ski Resort (summer only, in the winter it is converted to a six person high-speed chairlift.) in Ontario, Canada, The Canyons Resort in Park City, Utah, Mountain Creek, and the new Village Cabriolet at Winter Park Resort in Colorado. Open-air gondolas can also come in a style similar to a pulse gondola, like the Village Gondola at Panorama Ski Resort, British Columbia.

The first gondola built in the United States for a ski resort was located at the Wildcat Mountain Ski Area. It was a two-person gondola built in 1957 and serviced skiers until 1999. The lift was later demolished in 2004. The lift and its cabins were manufactured by a former Italian lift company: Carlevaro-Savio. One of the longest gondola rides in the world, Gondelbahn Grindelwald-Männlichen, is in the Bernese Oberland in Switzerland and connects Grindelwald with Männlichen.

In recent years, gondola lifts are finding increased usage in urban environments. Cable cars used for urban transit include the Metrocable in Medellín, Colombia; Portland Aerial Tram in Portland, Oregon, United States; Metrocable in Caracas, Venezuela; Trolcable in Mérida, Venezuela; Cable Aéreo in Manizales, Colombia; Mi Teleférico in La Paz, Bolivia; Mexicable in the State of Mexico, Mexico; Yenimahalle-Şentepe teleferik in Ankara, Turkey; the Emirates Air Line in London, UK;[4] and the TransMiCable in Bogotá, Colombia, due to open at the end of 2018. The Metrocable systems in Medellin and Caracas are fully integrated with the public transit network which provides passengers the ability to seamlessly transfer to the local metro lines.[5][6]

Disney Skyliner is a gondola-lift service, which opened on September 29, 2019 at Walt Disney World in central Florida. The system uses multiple lines and has five stations, and it connects Epcot and Disney's Hollywood Studios with one another and with several Disney-owned and -operated resort hotels.

In terms of urban gondola systems for the future, TransLink in Metro Vancouver has proposed to build a gondola up Burnaby Mountain to Simon Fraser University in an announcement in September 2010.[7] The project was sidelined in 2014,[8] but was revived in 2017.[9]

In late 2012, a widespread aerial gondola system was proposed for Austin, Texas, in an effort to expand mass transit options in the rapidly growing city.[10] The proposal was rejected by the local transit agency in 2017.[11]

A proposed gondola system in Montreal was ultimately rejected by the Old Port of Montreal.[12]

The technical department of Bergen municipality, Norway suggested in 2016 to build a cable car. The proposed gondola lift was inspired by a similar project in Gothenburg, Sweden and was planned for the Western part of Bergen harbor.

A ropeway conveyor or material ropeway[13] is essentially a subtype of gondola lift, from which containers for goods rather than passenger cars are suspended.

Ropeway conveyors are typically found around large mining concerns, and can be of considerable length. The COMILOG Cableway, which ran from Moanda in Gabon to Mbinda in the Republic of the Congo, was over 75 kilometers (47 mi) in length. The Norsjö cable car in Sweden had a length of 96 kilometers (60 mi).

In Eritrea, the Italians built the Asmara-Massawa Cableway in 1936, which was 75 kilometers (47 mi) long. The Manizales - Mariquita Cableway (1922) in Colombia was 73 km long.

Conveyors can be powered by a wide variety of forms of power sources: electric motors, internal combustion engines, steam engines, or gravity. Gravity is particularly common in mountainous mining concerns, and directly employed; the weight of loaded down-going containers pulling the returning empties back up the slope. Gravity can also be used indirectly, where running water is available; a waterwheel is powered by gravity acting on water, and is used to power the cable.[14]

Conventional systems where a single cable provides both support and propulsion of the cabins are often called monocable gondola lifts.[15] Gondola lifts which feature one stationary cable (known as the 'support' rope), and one haul rope are known as bicable gondola lifts, while lifts that feature two support ropes and one haul rope are known as tricable gondola lifts. Famous examples of bicable gondola lifts include the Ngong Ping 360 in Hong Kong, the Singapore Cable Car, and the Sulphur Mountain Gondola in Banff, Canada. This system has the advantage that the stationary cable's strength and properties can be tailored to each span, which reduces costs. They differ from aerial tramways , as these consist only of one or two usually larger cabins moving back and forth, rather than circulating. Bicable and tricable systems provide greater lateral stability compared with monocable systems, allowing the system to operate in higher cross-winds.