Fasil Ghebbi Enlarge Ethiopia
Not to be confused with Gondor.
City in Amhara, Ethiopia

Gondar previously served as the capital of both the Ethiopian Empire and the subsequent Begemder Province. The city holds the remains of several royal castles, including those in the Fasil Ghebbi UNESCO World Heritage Site.

Until the 16th century, the Solomonic Emperors of Ethiopia usually had no fixed capital town, but instead lived in tents in temporary royal camps as they moved around their realms while their family, bodyguard and retinue devoured surplus crops and cut down nearby trees for firewood. One exception to this rule was Debre Berhan, founded by Zara Yaqob in 1456; Tegulet in Shewa was also essentially the capital during the first century of Solomonic rule. Gondar was founded by Emperor Fasilides around the year 1635, and grew as an agricultural and market town. There was a superstition at the time that the capital's name should begin with the letter 'Gʷa' (modern pronunciation 'Gʷe'; Gonder was originally spelt Gʷandar), which also contributed to Gorgora's (founded as Gʷargʷara) growth in the centuries after 1600. Tradition also states that a buffalo led the Emperor Fasilides to a pool beside the Angereb, where an "old and venerable hermit" told the Emperor he would locate his capital there. Fasilides had the pool filled in and built his castle on that same site.[2] The emperor also built a total of seven churches; the first two, Fit Mikael and Fit Abbo, were built to end local epidemics.[clarification needed] The five emperors who followed him also built their palaces in the town.

Beginning with Emperor Menas in 1559, the rulers of Ethiopia began spending the rainy season near Lake Tana, often returning to the same location each year. These encampments, which flourished as cities for a short time, include Emfraz, Ayba, Gorgora and Dankaz.

In 1668, as a result of a church council, the Emperor Yohannes I ruled that the inhabitants of Gondar were to be segregated by religion. This caused the Muslims to move into their own quarter, Islamge (Amharic: እስላምጌ, "Islam place," or "Islam country") or Islam Bayt (እስላምቤት"House of Islam," lit. "Islam house"), within two years. This quarter came to be known as Addis Alem (Amharic for "New World").[3]

During the seventeenth century, the city's population is estimated to have exceeded 60,000. Many of the buildings from this period survive, despite the turmoil of the eighteenth century. By the reign of Iyasu the Great, Gondar had acquired a sense of community identity; when the Emperor called upon the inhabitants to decamp and follow him on his campaign against the Oromo in Damot and Gojjam, as had the court and subjects of earlier emperors, they refused.[4] Although Gondar was by any definition a city, it was not a melting pot of diverse traditions, nor Ethiopia's window to the larger world, according to Donald Levine. "It served rather as an agent for the quickened development of the Amhara's own culture. And thus it became a focus of national pride... not as a hotbed of alien custom and immorality, as they often regard Addis Ababa today, but as the most perfect embodiment of their traditional values."[5] As Levine elaborates in a footnote, it was an orthogenetic pattern of development, as distinguished from an heterogenetic one.[6]

An overview of the medieval city buildings

The town served as Ethiopia's capital until Tewodros II moved the Imperial capital to Magadala upon being crowned Emperor in 1855;[7] Tewodros II plundered and burnt the city in 1864, then devastated it again in December, 1866.[8][9] Abdallahi ibn Muhammad sacked Gondar when he invaded Ethiopia June 1887. Gondar was ravaged again on 23 January in the next year, when Sudanese invaders set fire to almost every one of the city's churches.[10]

After the military occupation of Ethiopia by the Kingdom of Italy in 1936, Gondar was further developed under Italian occupation,[11] and the Comboni missionaries established in 1937 the Latin Catholic Apostolic Prefecture of Gondar, which would be suppressed after the death of its only prefect in 1951.

During the Second World War, Mussolini's Italian forces made their last stand in Gondar in November 1941, after Addis Ababa fell to British forces six months before. The area of Gondar was one of the main centers of activity of Italian guerrilla against the British forces until summer 1943.[12]

During the Ethiopian Civil War, the forces of the Ethiopian Democratic Union gained control of large parts of Begemder, and during parts of 1977 operated within a few kilometers of Gondar, and appeared to be at the point of capturing the city.[13] As part of Operation Tewodros near the end of the Civil War, Gondar was captured by the Ethiopian People's Revolutionary Democratic Front in March 1991.[14] 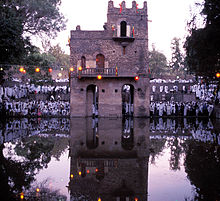 Crowds gather at the Fasilides' Bath in Gondar to celebrate Timkat – the Epiphany for the Ethiopian Orthodox Tewahedo Church.

Gondar traditionally was divided into several neighborhoods or quarters: Addis Alem, where the Muslim inhabitants dwelt; Kayla Meda, where the adherents of Beta Israel lived; Abun Bet, centered on the residence of the Abuna, or nominal head of the Ethiopian Church; and Qagn Bet, home to the nobility.[15] Gondar is also a noted center of ecclesiastical learning of the Ethiopian Orthodox Tewahedo Church, and known for having 44 churches – for many years more than any other settlement in Ethiopia. Gondar and its surrounding countryside constitute the homeland of most Ethiopian Jews.

The modern city of Gondar is popular as a tourist destination for its many picturesque ruins in Fasil Ghebbi (the Royal Enclosure), from which the emperors once reigned. The most famous buildings in the city lie in the Royal Enclosure, which include Fasilides' castle, Iyasu's palace, Dawit's Hall, a banqueting hall, stables, Empress Mentewab's castle, a chancellery, library and three churches. Near the city lie Fasilides' Bath, home to an annual ceremony where it is blessed and then opened for bathing; the Qusquam complex, built by Empress Mentewab; the eighteenth century Ras Mikael Sehul's Palace and the Debre Berhan Selassie Church.

Downtown Gondar shows the influence of the Italian occupation of the late 1930s. The main piazza features shops, a cinema, and other public buildings in a simplified Italian Moderne style still distinctively of the period despite later changes and, frequently, neglect. Villas and flats in the nearby quarter that once housed occupation officials and colonists are also of interest.

The town is home to the University of Gondar, which includes Ethiopia's main faculty of medicine. 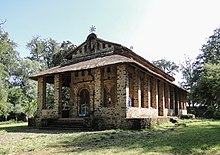 Based on the 2019 national census conducted by the Central Statistical Agency of Ethiopia (CSA), Gondar had a total population of 500,788, of whom 300,000 were men and 200,788 women. The majority of the inhabitants practiced Ethiopian Orthodox Christianity, with 90.2% reporting that as their religion, while 8% of the population said they were Muslim and 1.1% were Protestant.[16]

The 1994 national census reported a total population of 112,249 in 21,695 households, of whom 51,366 were men and 60,883 women. The three largest ethnic groups reported in Gondar Zuria were the Amhara (88.91%), the Tigrayan (6.74%), and the Qemant (2.37%); all other ethnic groups made up 1.98% of the population. Amharic was spoken as a first language by 94.57%, and 4.67% spoke Tigrinya; the remaining 0.76% spoke all other primary languages reported. 83.31% adhered to Ethiopian Orthodox Christianity, and 15.83% of the population said they were Muslim.[18] Gondar was once the home of a large population of Ethiopian Jews, most of whom immigrated to Israel in the late 20th and early 21st century, including the current Israeli Ambassador to Ethiopia, Belaynesh Zevadia.[19]

Some of the textured 3D models, a panorama tour, elevations, sections and plans are available on www.zamaniproject.org.

Air transport is served by Gondar Airport (ICAO code HAGN, IATA GDQ), also known as Atse Tewodros Airport, after the Emperor of Ethiopia (Atse) Tewodros. It is 18 km (11 miles) south of the city.[24] Travel within Gondar is mostly done by mini-buses and 3-wheeler motorcycles (accommodating 3–4 passengers).

Intercity bus service is provided by the Selam Bus Line Share Company and Sky Bus Transport System, as well as independently owned buses that depart from the town bus station.

As designated by Sister Cities International, Gondar is a sister city with: