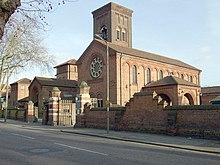 Golders Green Crematorium, as it is usually called, is in Hoop Lane, off Finchley Road, Golders Green, London NW11, ten minutes' walk from Golders Green Underground station. It is directly opposite the Golders Green Jewish Cemetery (Golders Green is an area with a large Jewish population). The crematorium is secular, accepts all faiths and non-believers; clients may arrange their own type of service or remembrance event and choose whatever music they wish.[1][3][4]

The crematorium gardens are listed at Grade I in the National Register of Historic Parks and Gardens.[2] 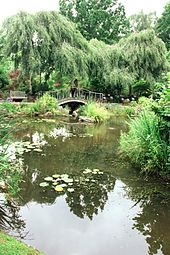 Cremation was not legal in Great Britain until 1885. The first crematorium was built in Woking and it was successful. At that time cremation was championed by the Cremation Society of Great Britain.[5] This society was governed by a council, at that time led by Sir Henry Thompson (president and founding member). There is a bust to his memory in the West Chapel of Golders Green Crematorium. Out of this Society was formed the London Cremation Company (which has its offices on the premises), who desired to build a crematorium within easy reach of London.

The crematorium in Golders Green was designed by the architect Sir Ernest George and his partner Alfred Yeates.[6] The gardens were laid out by William Robinson.[2] The crematorium is a red brick building in Lombardic style and was built in stages, as money became available.[2][6] The crematorium opened in 1902 and was built in four phases (1901-1910, 1910-1911, 1912–1916, 1926-1928).[7] By 1939, the site was largely completed, although since then some buildings have been added. Since November 1902 more than 323,500 cremations have taken place at Golders Green Crematorium, far more than any other British crematorium. It is estimated that the crematorium now averages around 2,000 cremations a year. The funerals of many prominent people have taken place there over the last century.

Ironically, the ashes of the first person cremated at Woking, Mrs Jeanette Pickersgill (died 21 April 1885), widow of artist Henry William Pickersgill, were removed from Woking to the East Columbarium at Golders Green, according to Woking's cremation records.

Interior of the columbarium

The chimney of the crematorium is located within the tower and the building is in an Italianate style.[1] The 12 acres (4.9 ha) of gardens are extensively planted, and produce a beautiful and tranquil environment for visitors. There are several large tombs, two ponds and bridge, and a large crocus lawn. Another notable feature is a special children's section, which includes a swinging bench. There is also a 'communist corner' with memorials to notables of the Communist Party of Great Britain. There are two cremation chapels and a Chapel of Memory. There are also three columbaria containing the ashes of thousands of Londoners and residents of neighbouring counties.

There have been 14 holders of the Victoria Cross cremated here,[8] and there are locations and memorials for many other military personnel of all ranks, and from many countries. Largest among them is the Commonwealth War Graves Commission memorial, commemorating 496 British and Commonwealth military casualties of both World Wars who were cremated here. Designed by Sir Edward Maufe, it was unveiled in 1952. Built in Portland Stone with names listed on three bronze panels, it stands at head of an ornamental pond at the western end of the memorial cloister.[9]

At Christmas, a Christmas tree is erected in the field in front of the main buildings. Although the crematorium is secular, a nativity scene is also placed near the Chapel of Memory.

The crematorium gardens are listed at Grade I in the National Register of Historic Parks and Gardens.[2] The Philipson Family mausoleum, designed by Edwin Lutyens, is a Grade II* listed building on the National Heritage List for England[10] and the crematorium building,[6] the wall, along with memorials and gates,[11] the Martin Smith Mausoleum[12] and Into The Silent Land, a sculpture by Henry Alfred Pegram[13] are all Grade II listed buildings. The largest sculpture portraying someone cremated here is the statue of Indian industrialist and friend of Gandhi, Ghanshyam Das Birla. 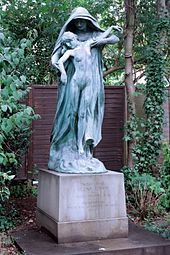 Into the Silent Land by Henry Alfred Pegram.

A map of the Garden of Rest and some information on persons cremated here is available from the office. Staff are available to help in finding a specific location. This service is £10 per request. The columbaria can be visited. There is also a tea room.[6]

Among those whose ashes are retained or were scattered here, are: 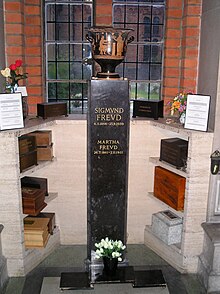 Among those cremated here, but whose ashes are elsewhere, are: