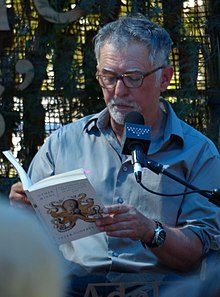 Peter Godfrey-Smith (born 1965) is an Australian philosopher of science and writer.

Godfrey-Smith is Professor of History and Philosophy of Science at the University of Sydney.[1] He works primarily in philosophy of biology and philosophy of mind, and also has interests in general philosophy of science, pragmatism (especially the work of John Dewey), and some parts of metaphysics and epistemology.

Born in Australia in 1965, Godfrey-Smith received a Ph.D. in philosophy from the University of California, San Diego in 1991 under the supervision of Philip Kitcher. He previously taught at Harvard University,[2] Stanford University, Australian National University, and the CUNY Graduate Center.[3] Godfrey-Smith was the recipient of the Lakatos Award[4] for his 2009 book, Darwinian Populations and Natural Selection which discusses the philosophical foundations of the theory of evolution.[5][6]

He has criticized the arguments of intelligent design proponents.[7]

Main article: Other Minds: The Octopus, the Sea, and the Deep Origins of Consciousness

In 2016, Godfrey-Smith published the book Other Minds: The Octopus, the Sea, and the Deep Origins of Consciousness.[8] It explores the origin of sentience, consciousness and intelligence in the animal kingdom, specifically how it evolved in cephalopods compared to mammals and birds.[9][10][11]