listen); abbreviated Glos.[2]) is a county in South West England. The county comprises part of the Cotswold Hills, part of the flat fertile valley of the River Severn, and the entire Forest of Dean.

The county town is the city of Gloucester, and other principal towns include Cheltenham, Stroud, Tewkesbury, Cirencester, Dursley, Cinderford, and Lydney.

The current Gloucestershire County Council area does not have the same geographical boundaries as the historic county. Some northern parts of the county, including Long Marston and Welford-on-Avon, were transferred to Warwickshire in 1931. Following the Local Government Act 1972, some southern parts of the county were transferred to the new county of Avon, which ceased to exist on 1 April 1996. After 1996, the city of Bristol and South Gloucestershire became separate unitary authorities.

Gloucestershire is a historic county mentioned in the Anglo-Saxon Chronicle in the 10th century, though the areas of Winchcombe and the Forest of Dean were not added until the late 11th century. Gloucestershire originally included Bristol, then a small town. The local rural community moved to the port city (as Bristol was to become), and Bristol's population growth accelerated during the industrial revolution. Bristol became a county in its own right, separate from Gloucestershire and Somerset in 1373. It later became part of the administrative County of Avon from 1974 to 1996.

Upon the abolition of Avon in 1996, the region north of Bristol became a unitary authority area of South Gloucestershire and is now part of the ceremonial county of Gloucestershire.

In July 2007, Gloucestershire suffered the worst flooding in recorded British history, with tens of thousands of residents affected. The RAF conducted the largest peacetime domestic operation in its history to rescue over 120 residents from flood affected areas. The damage was estimated at over £2 billion.[3]

Gloucestershire has three main landscape areas, a large part of the Cotswolds, the Royal Forest of Dean and the Severn Vale. The Cotswolds take up a large portion of the east and south of the county, The Forest of Dean taking up the west, with the Severn and its valley running between these features. The Daffodil Way in the Leadon Valley, on the border of Gloucestershire and Herefordshire surrounding the village of Dymock, is known for its many spring flowers, orchards, and woodland, which attracts many walkers.

This is a chart of trend of regional gross value added of Gloucestershire at current basic prices published (pp. 240–253) by Office for National Statistics with figures in millions of British Pounds Sterling.

Gloucestershire has mainly comprehensive schools with seven selective schools; two are in Stroud, Stroud High School for girls and Marling School for boys, one in Cheltenham, Pate's Grammar, and four in Gloucester, Sir Thomas Rich's for boys (aged 11–18) and girls (aged 16–18, in the sixth form), and Denmark Road High School and Ribston Hall for girls and The Crypt which is mixed. There are 42 state secondary schools, not including sixth form colleges, and 12 independent schools, including Cheltenham Ladies' College, Cheltenham College and Dean Close School. All but about two schools in each district have a sixth form, but the Forest of Dean only has two schools with sixth forms. All schools in South Gloucestershire have sixth forms. 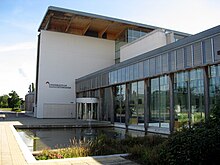 A campus of the University of Gloucestershire

Gloucestershire has one city and 33 towns:

The towns in Gloucestershire are:

Town in Monmouthshire with suburbs in Gloucestershire:

The county has two green belt areas, the first covers the southern area in the South Gloucestershire district, to protect outlying villages and towns between Thornbury and Chipping Sodbury from the urban sprawl of the Bristol conurbation. The second belt lies around Gloucester, Cheltenham, and Bishop's Cleeve, to afford those areas and villages in between a protection from urban sprawl and further convergence. Both belts intersect with the boundaries of the Cotswolds AONB.

There are a variety of religious buildings across the county, notably the cathedral of Gloucester, the abbey church of Tewkesbury (which is over 500 years old and has the tallest Norman tower in England), and the church of Cirencester. Of the abbey of Hailes near Winchcombe, founded by Richard, Earl of Cornwall, in 1246, little more than the foundations are left, but these have been excavated and fragments have been brought to light. 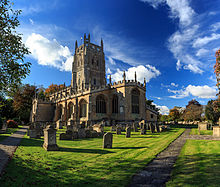 Most of the old market towns have parish churches. At Deerhurst near Tewkesbury and Bishop's Cleeve near Cheltenham, there are churches of special interest on account of the pre-Norman work they retain. There is also a Perpendicular church in Lechlade, and that at Fairford was built (c. 1500), according to tradition, to contain a series of stained-glass windows which are said to have been brought from the Netherlands. These are, however, adjudged to be of English workmanship.

Other notable buildings include Calcot Barn in Calcot, a relic of Kingswood Abbey. Thornbury Castle is a Tudor country house, the pretensions of which evoked the jealousy of Cardinal Wolsey against its builder, Edward Stafford, duke of Buckingham, who was beheaded in 1521. Near Cheltenham is the 15th-century mansion of Southam de la Bere, of timber and stone.[9] Memorials of the de la Bere family appear in the church at Cleeve. The mansion contains a tiled floor from Hailes Abbey. At Great Badminton is the mansion and vast domain of the Beauforts (formerly of the Botelers and others), on the south-eastern boundary of the county. Berkeley Castle at over 800 years old and the ruins of Witcombe Roman Villa at Great Witcombe are also notable heritage features.

An annual "cheese-rolling" event takes place at Cooper's Hill, near Brockworth and the Cotswold Games occurred within the county. 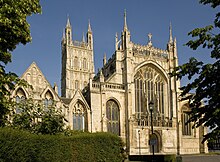 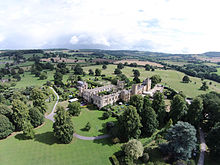 Places of interest in Gloucestershire include:

Areas of countryside in Gloucestershire include:

Gloucester News Centre is an independent news website with news and information for Gloucestershire.[10]

Local TV for the county is provided by BBC West and ITV West Country, although in the northern extremes of Gloucestershire, BBC Midlands and ITV Central (West) covers this area. 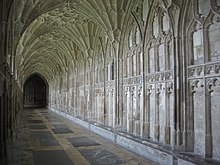 The south cloister of Gloucester Cathedral was used for filming scenes in the Harry Potter films.

There are two well-known accounts of childhood in rural Gloucestershire in the early 20th century, Laurie Lee's Cider With Rosie and Winifred Foley's A Child in the Forest. Part of Mrs. Craik's novel John Halifax, Gentleman is set in Enderley, a thinly disguised Amberley, where she lived at the time of writing.[11] Most of the book is set in Nortonbury, easily recognisable as Tewkesbury.

The county has also been the setting for a number of high-profile movies and TV series, including Die Another Day, the Harry Potter films and the BBC TV series Butterflies.[12] The film Hot Fuzz was set in Gloucestershire where Simon Pegg, who co-wrote and starred in the film, grew up.

A fictional Brimpsfield was the village, home of Peter and Abby Grant, in the 1970s BBC TV series Survivors, with a railway connection to London.

Witcombe Festival is an annual music festival held in Brockworth. As well as music, the three-day festival has it roots deep in cider. The festival consists of four stages and has been headlined by Dizzee Rascal, Plan B, Sigma, Ella Eyre, Example, Wiley, Heather Small, Lethal Bizzle and Tinchy Stryder.[17] 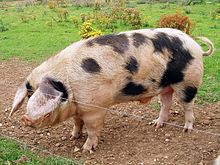 A boar of the local Gloucestershire Old Spot breed.

Gloucester cattle, a rare[21] breed, can still be found in and around Gloucestershire.[22] They can be recognised by the white stripe that runs down the centre of their backs to the tip of their tails. The cattle are famous for producing milk for both Single Gloucester and Double Gloucester cheeses.