Globe Theatre in Regina, Saskatchewan, Canada was founded in 1966 by Ken and Sue Kramer. It was the first professional educational theatre company in Saskatchewan.[1] 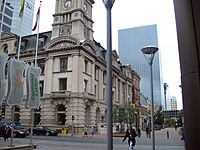 Founded in 1966 by Ken and Sue Kramer, Globe Theatre was Saskatchewan's first professional theatre company. Named for Shakespeare's Globe Theatre in London, more than fifty years later, Regina's Globe Theatre is the province's largest performing arts organization and the regional theatre for Regina and southern Saskatchewan. The theatre is housed in the Prince Edward Building in downtown Regina, a designated heritage site that was built in 1906 as the Regina Post Office and RCMP headquarters and later became City Hall. The theatre took over the second and third floors of the building in 1981. In 2014, Globe Theatre purchased The Prince Edward Building, which had been its rented home for more than thirty years.

Globe Theatre programs two stages: a 406-seat theatre-in-the-round Main Stage and a 100-seat black box space where the theatre produces the Shumiatcher Sandbox Series, a showcase for new work, emerging artists, and experimental theatre. The 6-play Main Stage program includes at least three Canadian plays each season. The theatre also programs a 'special event' at the Casino Regina Show Lounge and, between 2013-2016, a provincial tour. The theatre sells between 60,000 and 70,000 tickets each season. The practice of producing a Main Stage season in-the-round is a challenging and exhilarating process that fires up the imaginations of the artists who work at Globe Theatre.

The Globe Theatre School was launched in 2006 to provide people of all ages with the opportunity to participate in the art of theatre and creation. The school offers in-house multi-disciplinary classes, a provincial outreach program, a professional placement program with the University of Regina as well as specialty classes including Improv for Autism, an annual summer camp for newly arrived and immigrant youth in partnership with the Regina Open Door Society, and LAUNCH, an annual festival of new work by young artists.

Globe Theatre's Actor Conservatory Training Program has graduated 51 Saskatchewan actors since it began in 2008. The conservatory is offered every two years; admission is through audition. Conservatory graduates are now working at theatres across Canada including the Stratford Festival.