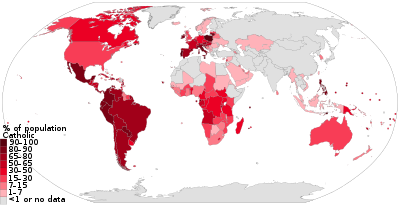 Percentage of Catholics by country 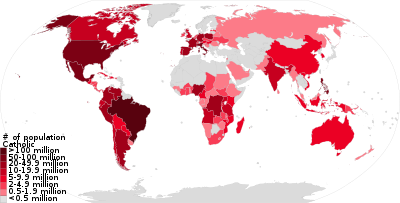 Number of Catholics by country

The Catholic Church is "the Catholic Communion of Churches, both Roman and Eastern, or Oriental, that are in full communion with the Bishop of Rome."[2] The church is also known by members as the People of God, the Body of Christ, the "Temple of the Holy Spirit", among other names.[3] According to Vatican II's Gaudium et spes, the "church has but one sole purpose–that the kingdom of God may come and the salvation of the human race may be accomplished."[4][5]

Four Latin Church archbishops are also called patriarchs. This is only titular but gives them precedence in papal milieu. In the case of the Patriarch of Venice, he may wear the red vestments of a Cardinal. Archbishops and bishops administer individual dioceses as successors of the twelve apostles. They are responsible for the ordination, appointment, and supervision of parish priests and the oversight of all church affairs within their diocese except the internal affairs of religious orders of pontifical right. If the responsibility associated with a certain diocese is large, a bishop may be assisted by one or more auxiliary bishops, who are accorded a titular see. A diocese may also have a coadjutor bishop (coadjutor archbishop in the case of an archdiocese), who is effectively the "co-ruler" of the diocese and automatically succeeds to the office of bishop whenever the incumbent bishop leaves office. The title of primate refers to the bishop of the first diocese in a country or territory, which typically has grown into a metropolitan archdiocese, but carries no additional authority.[citation needed]

The Catholic Church is the "world's oldest continuously functioning international institution."[8] It is also the largest non-government provider of education and health care in the world,[9] while the diplomatic status of the Holy See facilitates the access of its vast international network of charities.

According to the CIA Factbook and the Pew Research Center, the five countries with the largest number of Catholics are, in decreasing order of Catholic population, Brazil, Mexico, the Philippines, the United States, and Italy.

The country where the membership of the church is the largest percentage of the population is Vatican City at 100%, followed by East Timor at 97%.

According to the Census of the 2020 Annuario Pontificio (Pontifical Yearbook), the number of baptized Catholics in the world was about 1.329 billion at the end of 2018. The research initiative Catholics & Cultures compiles data on Catholic demographics, including from the Annuario Pontificio, by country.[14]

Conflicting numbers can be found in 2013 research conducted by the Brazilian polling institute Datafolha. This report states that the percentage of the population in Brazil of Catholic religion, over the age of 16 years, is just 57%,[15] in contrast to the 64.63% published by CIA and to the 68.6% of Pew Research Center. Also, the 2010 Mexican Census showed this percentage to be 83.9%[16] – against a 91.89% number in the CIA World Factbook.

By clicking on the icons in the column titles you can re-order the table by column.