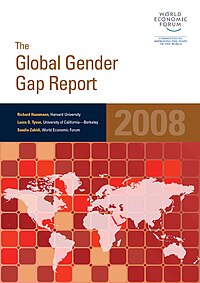 The methodology used to determine index scores is designed in such a way as to count situations in which men are disadvantaged relative to women as "equal".[3]

The report's Gender Gap Index ranks countries according to calculated gender gap between women and men in four key areas: health, education, economy and politics to gauge the state of gender equality in a country. The report measures women's disadvantage compared to men, and is not a measure of equality of the gender gap. Gender imbalances to the advantage of women do not affect the score.[3] So, for example, the indicator "number of years of a female head of state (last 50 years) over male value" would score 1 if the number of years was 25, but would still score 1 if the number of years was 50. Due to this methodology, gender gaps that favor women over men are reported as equality and would not cause deficits of equality in other areas to become less visible in the score, excepted for life expectancy. To put it more simply: women could be better off in all areas and still the index would deem that country perfectly equal.

The three highest-ranking countries have closed over 84% of their gender gaps, while the lowest-ranking country has closed only a little over 50% of its gender gap. It "assesses countries on how well they are dividing their resources and opportunities among their male and female populations, regardless of the overall levels of these resources and opportunities," the Report says.[4] "By providing a comprehensible framework for assessing and comparing global gender gaps and by revealing those countries that are role models in dividing these resources equitably between women and men, the Report serves as a catalyst for greater awareness as well as greater exchange between policymakers."[4]

The report examines four overall areas of inequality between men and women in 130 economies around the globe, over 93% of the world's population:

Thirteen out of the fourteen variables used to create the index are from publicly available "hard data" indicators from international organizations, such as the International Labour Organization, the United Nations Development Programme and the World Health Organization.[6]

This is the upper limiting value of the Gender Gap Index (limes superior) for the female-to-male ratio and for the male-to-female ratio.