Elmslea Chambers in Goulburn, New South Wales, Australia - built in 1933, it was one of the first buildings in Australia to use coloured polychrome terracotta in its façade which features a fine relief of birds, flowers, leaves and typical Art Deco sunbursts under the windows. 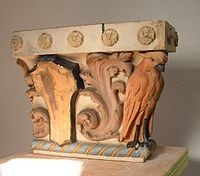 Glazed architectural terra-cotta (the hyphen usually only found in American usage) is a ceramic masonry building material used as a decorative skin. It has been popular in the United States from the late 19th century until the 1930s, and still one of the most common building materials found in U.S. urban environments. It is the glazed version of architectural terracotta; the material in both its glazed and unglazed versions is sturdy and relatively inexpensive, and can be molded into richly ornamented detail. Glazed terra-cotta played a significant role in architectural styles such as the Chicago School and Beaux-Arts architecture. 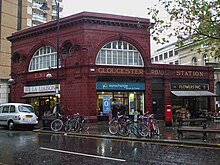 The material, also known in Great Britain as faience and sometimes referred to as "architectural ceramics", was closely associated with the work of Cass Gilbert, Louis Sullivan, and Daniel H. Burnham, among other architects. Buildings incorporating glazed terra-cotta include the Woolworth Building in New York City and the Wrigley Building in Chicago.

Glazed architectural terra-cotta offered a modular, varied and relatively inexpensive approach to wall and floor construction. It was particularly adaptable to vigorous and rich ornamental detailing. It was created by Luca della Robbia (1400–1482), and was used in most of his works.

Terra-cotta is an enriched molded clay brick or block. It was usually hollow cast in blocks which were open in the back, with internal stiffeners called webbing. Webbing substantially strengthened the hollow blocks with minimal weight increase. The blocks were finished with a glaze, with a clay wash or an aqueous solution of metal salts, before firing. Late 19th century advertising for the material promoted the durable, impervious and adaptable nature of glazed architectural terra-cotta. It could accommodate subtle nuances of modeling, texture and color. Compared to stone, it was easier to handle, quickly set and lower cost. The cost of producing the blocks, when compared to carving stone, was a considerable saving, especially when casts were used in a modular fashion—that is, used repeatedly. It never needed paint, and periodic washings restored its appearance.

Variations in the color and pattern of the glaze could make it look like granite or limestone; this flexibility helped make it attractive for architects.

The American Terra Cotta Corporation, founded in 1881,[2] operated for eighty-five years in the little town of Terra Cotta in the heart of Illinois dairy country (near Crystal Lake, Illinois). The company fabricated architectural terra cotta for more than 8,000 buildings throughout the U.S. and Canada. It was the last exclusive manufacturer of architectural terra cotta by the time it ceased production in 1966. From its founding, in time to rebuild the fire-ravished city of Chicago, until its closing, it was the major producer of architectural glazed terra cotta in North America.

Guastavino tile was used in many places, including the Bridgemarket under the Manhattan side of the Queensboro Bridge.

Use in Great Britain

Burmantofts faience in the Great Hall of the University of Leeds

From around 1880 unglazed terra-cotta was supplanted by the glazed version - faience, and glazed brick - which were easily cleaned, and not blackened by city smoke, notably by the Burmantofts Pottery company which also exported to Paris and Montreal.[6]

Faience was popularised in Melbourne in the 1920s by architects such as Harry Norris. One of the leading commercial architects of the time in the city, Norris was strongly influenced by trends in American architecture and used faience on projects such as the Nicholas Building and the Kellow Falkiner Showrooms (a 1928 car showroom) in South Yarra.[7] In Sydney, it featured on notable buildings such as BMA House, designed by Joseph Charles Fowell. Australian-made tiles were available from Wunderlich Tiles, a company founded by London-born Frederick Wunderlich.[8]