Gjesdal is a municipality in Rogaland county, Norway. It is located in the traditional district of Jæren. The administrative centre of the municipality is the village of Ålgård. Other villages in Gjesdal include Dirdal, Frafjord, Gilja, Gjesdal, and Oltedal. The municipality lies about 25 kilometres (16 mi) to the southwest of the city of Stavanger in southwestern Norway.[3]

The 618-square-kilometre (239 sq mi) municipality is the 187th largest by area out of the 356 municipalities in Norway. Gjesdal is the 95th most populous municipality in Norway with a population of 12,002. The municipality's population density is 21.5 inhabitants per square kilometre (56/sq mi) and its population has increased by 17.6% over the previous 10-year period.[4][5]

Høgsfjorden in front, Frafjorden in the back, looking east. Gjesdal includes everything in the forefront and right side, Forsand is on the left-back of the fjord. 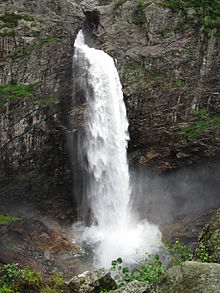 View of the Månafossen waterfall

The municipality (originally the parish) is named after the old Gjesdal farm (Old Norse: Gesdalir), since the first Gjesdal Church was built there. The first element is probably an old river name and the last element is the plural form of dalr which means "valley" or "dale".[6]

Before 1889, the name was written Gjæsdal, which is the Danish spelling. During the period from 1889-1917 it was spelled Gjesdal (Norwegian language version). Then starting in 1918, it was spelled Gjestal after the pronunciation of the local dialect (the d in dal is pronounced t because of the voiceless consonant s in front). In 1964, the spelling was changed back to the etymologically correct form of Gjesdal.[7]

The coat of arms was granted on 15 March 1985. The arms show a white sheep's head on a blue background. The sheet was chosen as a symbol because sheep breeding and wool manufacturing have both been important throughout the history of Gjesdal. The wool industry was centered in the village of Ålgård where wool, textile, and clothing businesses have thrived.[8]

The Church of Norway has two parishes (sokn) within the municipality of Gjesdal. It is part of the Jæren prosti (deanery) in the Diocese of Stavanger.

The parish of Gjæsdal was established as a municipality in 1838 (see formannskapsdistrikt law). It originally was much smaller than it is today, centered on the Gjesdalen valley in the western part of the present-day municipality. During the 1960s, there were many municipal mergers across Norway due to the work of the Schei Committee. On 1 January 1965 several areas were merged to form a much larger municipality of Gjesdal:[9]

All municipalities in Norway, including Gjesdal, are responsible for primary education (through 10th grade), outpatient health services, senior citizen services, unemployment and other social services, zoning, economic development, and municipal roads. The municipality is governed by a municipal council of elected representatives, which in turn elect a mayor.[10] The municipality falls under the Jæren District Court and the Gulating Court of Appeal.

The municipal council (Kommunestyre) of Gjesdal is made up of 27 representatives that are elected to four year terms. Currently, the party breakdown is as follows:

Gjesdal sits at the head of the Høgsfjorden and along the south and east sides of the Frafjorden. The Månafossen waterfall, the largest waterfall in Rogaland county, is located in the Frafjord valley. There are several large lakes in the municipality such as Edlandsvatnet, Flassavatnet, Limavatnet, and Oltedalsvatnet. The Figgjoelva river has its headwaters in Gjesdal also.