Advertisement - You can get this game from STEAM
Italian politician

Giuliano Amato OMRI (Italian pronunciation: [dʒuˈljaːno aˈmaːto]; born 13 May 1938) is an Italian politician who twice served as Prime Minister of Italy, first from 1992 to 1993 and again from 2000 to 2001. Later, he was Vice President of the Convention on the Future of Europe that drafted the European Constitution and headed the Amato Group. He is commonly nicknamed dottor Sottile, (which means "Doctor Subtilis", the sobriquet of the Scottish Medieval philosopher John Duns Scotus, a reference to his political subtlety). From 2006 to 2008, he was the Minister of the Interior in Romano Prodi's government. On 12 September 2013, President Giorgio Napolitano appointed him to the Constitutional Court of Italy, where he has served since then.[1]

Born in Turin into a Sicilian family, Amato grew up in Tuscany. He received a first degree in law from the University of Pisa in 1960, while attending the prestigious Collegio Medico-Giuridico of the Scuola Normale Superiore, which today is Sant'Anna School of Advanced Studies, and a master's degree in comparative law from Columbia Law School in 1963.[2] After teaching at the Universities of Modena, Perugia and Florence, he worked as professor of Italian and Comparative Constitutional Law at the University of Rome La Sapienza from 1975 to 1997.[2]

From June 1992 to April 1993, Amato served as Prime Minister. During those ten months, a series of corruption scandals rocked Italy and swept away almost an entire class of political leaders. Amato himself was never implicated, notwithstanding how close he was to Bettino Craxi, a central figure in the corruption system.

As Prime Minister, Amato responded effectively to two devaluations of the lira in the wake of currency speculation that led Italy to be expelled from the European Monetary System by cutting the budget deficit drastically, thus taking the first steps in the road that would bring Italy to adopt the Euro.

At a point, his government was harshly contested because of a decree that suddenly moved the competence for corruption investigations into the hands of the police, which, being controlled directly by the government, would have not been independent. Fearing that the new system would have effectively blocked investigations on political corruption, Italians took to the streets in massive, spontaneous rallies. President Oscar Luigi Scalfaro refused to sign the decree, deeming it blatantly unconstitutional. While his justice minister Giovanni Conso took the blame, it has been disputed whether Amato was a victim of circumstances or whether he really wanted to save the corruption-ridden system.

At the end of his period as Prime Minister, Amato gave a speech to the Parliament in which he solemnly promised that at end of his term he would retire from politics, stressing that his was a true commitment and that he would not break this promise as some politicians (whom he characterized as "mandarins") used to do. However, this promise was short-lived; Amato has regularly come under criticism for having made such a solemn commitment and failing to keep it.

Amato was President of the Italian antitrust authority from November 1994 to December 1997,[3] Minister for Institutional Reforms in Massimo D'Alema's first government from October 1998 to May 1999, and, once again, Treasury Minister in D'Alema's second government from December 1999 to April 2000. Amato was nearly nominated for the Presidency of the Republic and was a close contender to replace Michel Camdessus as head of the International Monetary Fund. 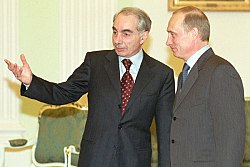 Amato with Vladimir Putin in Rome, 2001

Amato served as Prime Minister again from April 2000 to May 2001. He promoted economic competitiveness as well as social protection. In addition to economic reforms, he pushed ahead with political and institutional reforms, trying to deal with a weak executive and fragmented legislature.

In December 2001, European Union leaders at the European Council in Laeken appointed Amato and former Belgian Prime Minister Jean-Luc Dehaene to be Vice Presidents of the Convention on the Future of Europe to assist former French President Valéry Giscard d'Estaing in the drafting of the new European Constitution. He was elected a Foreign Honorary Member of the American Academy of Arts and Sciences in 2002.[4]

Amato was a Member of the Senate representing the constituency of Grosseto in Tuscany from 2001 to 2006. In 2006, he was elected to the Chamber of Deputies for the Olive Tree list, and he was named Minister of the Interior in Romano Prodi's centre-left government.

Since 2010, he also leads advanced seminar classes at the Master in International Public Affairs of the LUISS School of Government.

Amato is married to Ms Diana Amato, a professor of Family Law at the University of Rome. They have two children, Elisa and Lorenzo, and five grandchildren, Giulia, Marco, Simone, Elena and Irene. As of September 2020, Amato is a member of the Italian Aspen Institute.[5]

In 2011, Amato declared that Italian creativity is not supported by an adequate efficiency of the organization of its public and private entities. He believes it had a role in the lost hope in the future and in the sense of a common national identity, as well as it hadn't been yet perfectioned as whole in a way that was congruent with its essence. That loss had favoured the flourishing of xenophoby and purported regional identities (e.g. the Lega Nord movement).[9]

He think the Brigandage after 1861 in Southern Italy was an unfair and unlawful movement that can't be seen as form of antinational rebellion. However, the soldiers and the officials of the Borbonic Army who joined the movement can't be defined as betrayers of the ongoing Italy. It is also not credible the Expedition of the Thousand could have caused the annexation of the Southern Italy to the Kingdom of Sardinia by itself, while the main political and cultural foundations had been thrown by the works of intellectuals like Francesco Mario Pagano and Vincenzo Cuoco produced in the ninth decade of the XVIII century.[9] If he didn't believe the national identity is always something of more important than sub-national or sovra-national ones, he believes in the multi-layer identities model proposed by Alberto Banti, in a way for which the European identity strengthens the Italian identity even when they live and work in a foreign country. According to him, the Italian identity is kept alive in any country in which they should have gone.[9]