Gilles Duceppe (French pronunciation: ​[ʒil dysɛp]; born July 22, 1947) is a Canadian politician, proponent of the Quebec sovereignty movement and former leader of the Bloc Québécois. He was a Member of Parliament in the House of Commons of Canada for over 20 years and has been the leader of the sovereigntist Bloc Québécois for 15 years in three stints: 1996, 1997-2011 and in 2015. He is the son of a well-known Quebec actor, Jean Duceppe. He was Leader of the Official Opposition in the Parliament of Canada from March 17, 1997, to June 1, 1997. He resigned as party leader after the 2011 election, in which he lost his own seat to New Democratic Party (NDP) candidate Hélène Laverdière and his party suffered a heavy defeat; however, he returned four years later to lead the party into the 2015 election.[1][2] After being defeated in his own riding by Laverdière again, he resigned once more.[3]

Duceppe was born in Montreal, Quebec, the son of Hélène (née Rowley) and actor Jean Duceppe. His maternal grandfather was John James Rowley, a Briton by birth, an Irish by descent, and a home child.[4] Duceppe often quips of his British roots, once saying "I'm a bloke who turned Bloc."[5]

Duceppe has told the story of an Anglophone Grade 6 teacher slapping him after he complained about preferential treatment being given to anglophone students.[6] Duceppe claimed he slapped the teacher back. He became a sovereigntist by the age of 20, inspired by René Lévesque and the founding of the Mouvement Souveraineté-Association.[7]

Duceppe completed his high school studies at the Collège Mont-Saint-Louis. Duceppe then studied political science at the Université de Montréal but did not complete his program of study. While attending the Université de Montréal, he became general manager of the school's newspaper, Quartier Latin. In his youth, he advocated communism, and held membership in the Workers' Communist Party of Canada (WCP), a Maoist group. Duceppe later claimed that his three-year membership in the WCP was a mistake brought on by a search for absolute answers.[7][8]

However, during this period (which lasted well into his thirties) he subscribed to militant Maoist ideology and was fired from his job as a hospital orderly for belligerent activities.[9][8] Duceppe even went so far as to intentionally spoil his 1980 sovereignty-association referendum ballot arguing that Québécois should instead focus their efforts on staying united to fight capitalism.[8]

Before becoming a member of Parliament, Duceppe worked as a hospital orderly and later became a trade union negotiator. In 1968 he became vice-president of the Union générale des étudiants du Québec (General Union of Quebec Students) and in 1970 manager of the Université de Montréal student paper, Quartier latin. In 1972 he launched his career in community and union settings, as moderator for the citizen's committee of Hochelaga-Maisonneuve, then in 1977 as a representative for the Royal Victoria Hospital employees. In 1981 he became a union organizer for the Confédération des syndicats nationaux (Confederation of National Trade Unions), where he became a negotiator in 1986.[8]

In 1990, Duceppe was elected to the House of Commons of Canada in a by-election for the eastern Montreal riding of Laurier—Sainte-Marie. He defeated Liberal Denis Coderre, who would later serve alongside Duceppe in Parliament before becoming Mayor of Montreal. Duceppe would be handily re-elected at each election from 1993 to 2008.

Duceppe originally sat as an independent because the Bloc had not been registered by Elections Canada as a political party. All of the Bloc's other Members of Parliament had crossed the floor from either the Progressive Conservative Party or the Liberal Party earlier that year. Duceppe's victory demonstrated — for the first time — that the party had electoral support in Quebec and could win elections. Previously, many pundits (and members of other parties) predicted that the Bloc would not gain traction with ordinary voters in Quebec.[10]

Leadership of the Bloc Québécois 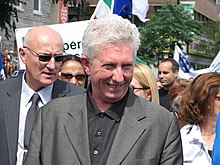 Gilles Duceppe during a 2007 protest.

In the 1997 general election, the Bloc lost official opposition status, slipping to third place in the House of Commons behind Preston Manning's Reform Party. During the campaign, Duceppe visited a cheese factory where he was photographed wearing a hairnet resembling a shower cap, which was widely parodied on Canadian television.[8][11]

The Bloc lost more support during the 2000 election, winning just 38 seats. Over this period, critics derided Duceppe as an ineffectual campaigner, though no serious challenge to his leadership emerged.[8]

When Jean Chrétien stepped down as Prime Minister, to be succeeded by Paul Martin, the Bloc's fortunes improved markedly, particularly after the sponsorship scandal erupted. Duceppe strongly criticized the Liberals over the misuse and misdirection of public funds intended for government advertising in Quebec. During the election's national debates, Duceppe's lucid explanations of Bloc Québécois policies and his chastising of the other national party leaders' promises, resulted in both the French and English media ruling him the best speaker. In the 2004 election, Duceppe's Bloc won 54 seats in the Commons, nearly equaling what it had won in its 1993 breakthrough, while Martin's Liberals were reduced to a minority government.

With Chrétien's departure, Duceppe became the longest-serving leader of a major party in Canada. With the recent success of the Bloc, and his recently well-received performance as leader, speculation mounted that Duceppe might seek the leadership of the Parti Québécois – particularly when Bernard Landry stepped down as party leader on June 4, 2005. On June 13, 2005, Duceppe announced that he would not run for the leadership of the PQ.[12] 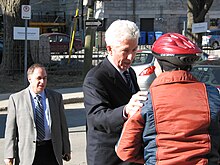 Gilles Duceppe discussing with a voter during the 2011 federal election campaign.

Ducceppe's Bloc, along with the Stephen Harper's Conservatives and Jack Layton's NDP, worked together on November 28, 2005 to pass a motion of no confidence in the minority Liberal government of Prime Minister Paul Martin after findings in the Sponsorship Scandal. In the resultant 2006 federal election, many Bloc insiders believed that Duceppe's popularity, combined with the unpopularity of the federal Liberal Party in Quebec, would push the Bloc Québécois over the symbolic majority vote mark among Quebec voters. Many Quebec separatists felt that a strong performance by the Bloc in the 2006 federal election would boost the sovereignty movement and perhaps set the stage for a new referendum on secession after the anticipated Quebec provincial election expected in 2007. In actuality, a late surge in Conservative and federalist support kept the Bloc's share of the popular vote below 43% giving the Bloc only 51 seats.[13] The Conservatives' gains in Quebec, as well as Ontario, gave the party enough seats to form a minority government with Harper as prime minister, replacing the Liberals' Paul Martin. The unimpressive and lackluster results on election night called into question the level of separatist support in Quebec.

In the March 26, 2007 Quebec provincial election, the Parti Québécois found itself reduced to third place in the National Assembly of Quebec, behind both the governing Quebec Liberal Party and the opposition Action démocratique du Québec. Following this disappointing result, the PQ leader, André Boisclair, announced his resignation on May 8, 2007. Duceppe confirmed on May 11, 2007, that he would seek the PQ leadership[14] but the next day he withdrew from the race.[15] After his withdrawal, Duceppe announced that he would support two-time leadership hopeful Pauline Marois.[16]

In the 2008 federal election, Duceppe led the Bloc Québécois to 49 seats, up one from its pre-dissolution standing of 48.[17] However, the Bloc's share of the popular vote fell again, to 38%, its lowest result since 1997. After the election, Liberals and NDP reached a deal form a minority coalition government with support from the Bloc Québécois, which would have toppled the minority Conservative government, however the Governor General agreed to prorogue parliament before the vote could take place. After prorogation, the Liberals underwent a change in leadership and distanced themselves from the coalition agreement and supported the Conservatives' budget. However Duceppe's Bloc and Jack Layton's NDP remained committed to voting against the Conservatives.

In 2011, the Bloc cooperated with the Liberals and NDP to find the Conservative government in Contempt of Parliament, after all three opposition parties indicated that they would not accept the Conservatives' budget, leading Prime Minister Harper to request the dissolution of parliament. The Bloc demanded $5 billion for the province, including compensation for damages from the January 1998 North American ice storm and $175 million towards a new hockey arena to bring back the Quebec Nordiques, which the Conservatives dismissed outright.[18][19][20] In the resultant 2011 federal election, the Bloc suffered a massive 43-seat loss—including many seats they'd held since their 1993 breakthrough—cutting them down to a rump of four seats. Much of that support bled to the NDP who ascended from fourth place to second place to become the Official Opposition, largely by winning 58 seats in Quebec which included a sweep of the Bloc's heartlands in Quebec City and eastern Montreal. The NDP, which entered the election with only one seat in the province - Tom Mulcair - had surged in the last weeks of the campaign at the expense of the Bloc due to NDP leader Jack Layton's charismatic personality and leftist nationalism policies, while Bloc "over the years defend[ed] Quebec's interests, but the sovereigntist agenda is no longer very relevant".[21] Duceppe lost his own seat to NDP challenger Hélène Laverdière by 5,400 votes. Accepting responsibility for the Bloc's crushing defeat, Duceppe announced his pending resignation as Bloc leader soon after the result was beyond doubt. He remained defiant, however, vowing not to rest "until Quebec becomes a country".[22]

Retirement and brief return to politics

Duceppe has worked as a political analyst since his departure from parliament. In 2014, he denounced comments made by newly elected Bloc leader Mario Beaulieu in which he seemingly dismissed the Bloc under Duceppe as having followed a gradualist strategy for achieving sovereignty which Beaulieu characterised as defeatist and for invoking the phrase "nous vaincrons" (we will vanquish), which was a slogan employed by the paramilitary Front de libération du Québec.[25]

After two years of further decline in the polls and internal divisions, it was announced June 10, 2015 that Duceppe would be returning to lead the Bloc into the campaign while his successor, Mario Beaulieu would relinquish the leadership but remain party president.[26][27] The party executive agreed on June 9, 2015, to split the positions of president and party leader in order to facilitate Duceppe's return. The changes were ratified by the party's general council[28] on July 1.[29][30]

On August 1, 2015, it was reported that Duceppe had decided to contest his former riding of Laurier-Sainte-Marie in the upcoming federal election and that he would announce this in a press conference shortly after the election was called, which occurred on August 2.[31] However, while leading his party to a win of 10 seats in the October 19, 2015 election, up from two, Duceppe was personally defeated in his riding and announced his resignation as leader several days later.[32]