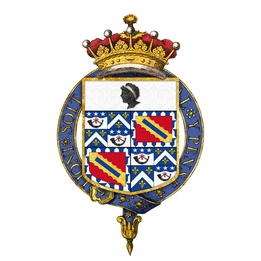 Garter-encircled shield of arms of Gilbert Elliot-Murray-Kynynmound, 4th Earl of Minto, KG, as displayed on his Order of the Garter stall plate in St. George's Chapel.

Gilbert John Elliot-Murray-Kynynmound, 4th Earl of Minto KG GCSI GCMG GCIE PC (9 July 1845 – 1 March 1914) was a British aristocrat and politician who served as Governor General of Canada, the eighth since Canadian Confederation, and as Viceroy and Governor-General of India, the country's 17th.

Minto was born in London, the son of William Elliot-Murray-Kynynmound, 3rd Earl of Minto, and Emma, daughter of General Sir Thomas Hislop, 1st Baronet. After completing his education at Eton College and Trinity College, Cambridge,[1] he was commissioned Lieutenant in the Scots Guards in 1867, but left in 1870. He joined the 1st Roxburghshire Mounted Rifle Volunteer Corps as a Captain in 1872. In 1874, in the capacity of a newspaper correspondent, he witnessed the operations of the Carlists in Spain; he took service with the Turkish army in the war with Russia in 1877 and served under Lord Roberts in the second Afghan War (1878–1879), having narrowly escaped accompanying Sir Louis Cavagnari on his fatal mission to Kabul.[2]

He acted as private secretary to Lord Roberts during his mission to the Cape in 1881,[2] and was with the army occupying Egypt in 1882, thus furthering his military career and his experience of colonial administration. He was promoted Major in 1882. He was military secretary to the Marquess of Lansdowne during his governor-generalship of Canada from 1883 to 1885, and lived in Canada with his wife, Mary Caroline Grey, sister of Lord Grey, Governor General from 1904 to 1911, whom he had married in Britain on 28 July 1883. On this first Canadian visit, he was very active in raising a Canadian volunteer force to serve with the British Army in the Sudan Campaign of 1884. He served as Chief of Staff to General Middleton in the Riel Rebellion of 1885. When he was offered command of the North-West Mounted Police, he decided instead to pursue a political career in Britain. On his departure home to Britain, Canadian Prime Minister Sir John A. Macdonald apparently said to him, "I shall not live to see it, but some day Canada will welcome you back as Governor General".

His political aspirations were checked with his defeat in the 1886 general election, where he stood as the Conservative candidate for Hexham. He then applied himself with great enthusiasm to promoting a volunteer army in Britain. In 1888 he was promoted Colonel on assuming command of the South of Scotland Brigade. He resigned his commission in 1889.

When Lord Minto succeeded to the earldom in 1891, Macdonald's prediction came true when Minto was named Governor General of Canada in the summer of 1898.[2] Sir Wilfrid Laurier wrote that Lord Minto "took his duties to heart" and a review of his life reveals an energetic man who welcomed many challenges and responsibilities.

Lord Minto's term of office was marked by a period of strong nationalism which saw economic growth coupled with massive immigration to Canada. Relations with the United States were strained as border and fishing disputes continued to create problems between the two countries.

In September 1901, after Queen Victoria's death in January, the Duke and Duchess of Cornwall and York (later to become King George V and Queen Mary) visited Canada, and travelled with Lady Minto to western Canada and the Klondike. Following the tour, Minto recommended Thomas Shaughnessy, President of the Canadian Pacific Railway, to the government at Westminster, via the Secretary of State for the Colonies, for a knighthood, as recognition for his service to the Duke and Duchess of York. Prime Minister Wilfrid Laurier, to whom Shaughnessy was no friend, opposed the idea; but, Minto made the recommendation anyway, invoking the ire of Laurier and prompting the Prime Minister to draft a policy dictating that all Canadian nominees for honours must be approved by the prime minister before the list was sent to London.[3]

Lord Minto's convictions about the importance of preserving Canadian heritage led to the creation of the National Archives of Canada. 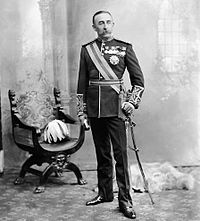 The Earl of Minto as Governor General of Canada.

Lord and Lady Minto were sports enthusiasts and the Minto Skating Club, which they founded in 1903, has produced many famous ice skaters. They both excelled at the sport and hosted many lively skating parties during their time at Rideau Hall. In the summer, the Minto family loved to bicycle and play lacrosse. In 1901, Lord Minto donated the Minto Cup and appointed trustees to oversee its annual awarding to the champion senior men's lacrosse team of Canada (since 1937 the Cup has been awarded to the junior men's champions). He loved the outdoors, championed the conservation of natural resources and promoted the creation of national parks.

In education and health, Lord Minto encouraged a forward-looking approach. He believed that Canada's progress depended on the cultivation of patriotism and unity, and this conviction was reflected in his desire to see a wider history curriculum developed in Canadian schools. In response to the health crisis posed by tuberculosis, he helped establish the first anti-tuberculosis foundation in Canada.

Lord Minto also took great interest in the development of the Canadian military and emphasized the need for training and professional development. He was appointed honorary Lieutenant-Colonel of the Governor General's Foot Guards Regiment on 1 December 1898 and was subsequently appointed Honorary Colonel, a tradition that has continued with the post of Governors General to this day.

He was appointed a Privy Counsellor on 11 August 1902,[4] following an announcement of the King's intention to make this appointment in the 1902 Coronation Honours list published in June.[5]

On his trip back to Britain in 1904, having finished his term as Canada's Governor General, Lord Minto wrote in his journal "... so our life in Canada is over and it has been a great wrench parting from so many friends and leaving a country which I love, and which has been very full of interest to me".

Viceroy and Governor General of India

In 1905, on the resignation of Lord Curzon of Kedleston, Lord Minto was appointed Viceroy and Governor-General of India, retiring in 1910.[2] In this, he followed in the footsteps of his great-grandfather, the first Lord Minto. When John Morley as Secretary of State for India wrote to Minto arguing that "Reforms may not save the Raj, but if they don't, nothing else will", Minto replied:

...when you say that "if reforms do not save the Raj nothing else will" I am afraid I must utterly disagree. The Raj will not disappear in India as long as the British race remains what it is, because we shall fight for the Raj as hard as we have ever fought, if it comes to fighting, and we shall win as we have always won.[6]

The reforms were called usually by the name "Morley-Minto Reforms" because of both John Morley and Lord Minto worked together to draw these reforms. They were passed by the British parliament in 1909 as the Indian Councils Act. The infamous Morley-Minto reforms introduced a system of communal representation for Muslims based on the concept of ‘separate electorate’ in India. The reforms were based on old British policy of Divide and Rule. After the Sepoy Mutiny of 1857 the Britishers wanted to strengthen the British Raj and what better way then division on basis of religion. This introduced Hindu vs Muslim Ideology in India. Under this system, the Muslim members were to be elected only by Muslim voters. This particular act ‘legalised communalism’ and Lord Minto came to be renowned as the Father of Communal Electorate. He was then succeeded by Lord Hardinge of Penshurst.

For his lifetime of service, he was made a Knight of the Garter.

He married, on 28 July 1883, Lady Mary Caroline Grey, daughter of Charles Grey and Caroline Eliza Farquhar. They had five children: 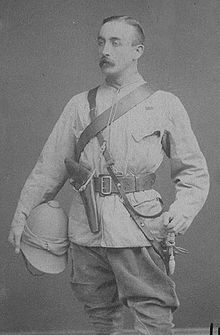 Lord Melgund in 1885, as Middleton's chief of staff

The Earl of Minto's popularity in Canada outlived him. In addition to a Minto Place in Rockcliffe, Ottawa and Minto Street in Vancouver and the SS Minto, a famous steamer on the Arrow Lakes, the gold-mining company town of Minto City in the Bridge River Country, established 1936, was named in honour of the Earl. Also named for the Earl was Mount Minto in the Atlin District of far northern British Columbia, the town of Minto, Ontario, and the town of Minto, North Dakota in the United States.[citation needed] In addition, Minto, New Brunswick was renamed in memory of him. The Earl of Minto and Lady Minto appeared on the obverse of the Canadian four-dollar bill in the 1900 and 1902 versions of this denomination.

Minto Park in Kolkata (formerly Calcutta), India, commemorates him. The school from which Aligarh Muslim University evolved was named behind him as Minto Circle after his generous funding for the construction of the new school buildings.

Minto Road, an area where most of the ministers of Bangladesh government have their official residence, is named after Lord Minto.

Minto Hospital and Minto Park (now officially renamed but popularly still known as such) in Lahore were also named after him.