Gianfranco Fini (born 3 January 1952) is an Italian politician, former President of the Italian Chamber of Deputies from 2008 to 2013.

He is the former leader of the conservative National Alliance, the neo-fascist Italian Social Movement, and the center-right Future and Freedom party. He was Deputy Prime Minister and Minister of Foreign Affairs in Silvio Berlusconi’s government from 2001 to 2006.

Fini was born on 3 January 1952 in Bologna.[3] His grandfather, a communist activist, died in 1970. His father, Argenio "Sergio" Fini (Bologna 1923 - Rome 1998), was a volunteer with the Italian Social Republic (a fascist state in Northern Italy allied with Germany during 1943-45); he later declared feeling close to the Italian Socialist Democratic Party, but he withdrew from political activity after his son became involved in the Italian Social Movement.

His mother, Erminia Marani (Ferrara 1926 - Rome 2008), was the daughter of Antonio Marani, who took part along with Italo Balbo in the march on Rome, which signaled the beginning of fascism in 1922. The name Gianfranco was chosen in remembrance of a cousin, who was killed when he was 20 years old by partisans soon after the liberation of Northern Italy on April 25, 1945.

In the 1980s he met Daniela Di Sotto, at that time married to Sergio Mariani, a friend and party officer. Mrs. Di Sotto ended her marriage to stay with Fini. Mariani would try to kill himself soon after.[4][5] In 1985 they had their only daughter, Giuliana. Fini and Di Sotto married in a civil ceremony in Marino in 1988. They separated in 2007.

Five months after his separation, his relationship with Elisabetta Tulliani, a lawyer, was revealed. In December 2007, they had a daughter, Carolina.[6] Their second daughter is called Martina.

From the beginning to the role of Deputy of Giorgio Almirante

Gianfranco Fini attended "Laura Bassi" high school in Bologna. His first known involvement with politics occurred in 1968 when, the 16-year-old Fini was involved in clashes with communist activists, among them a protest in front of a cinema against the screening of the John Wayne movie The Green Berets. At this time, he became involved with the Italian Social Movement (MSI), a neo-fascist political party. 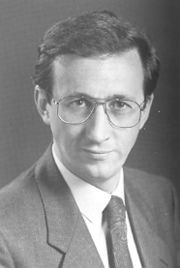 He then began his political career in the Fronte della Gioventù (Youth Front), the MSI youth organization.

Three years later, he moved with his family to Rome. In August 1976 he served his military service in Savona, then in Rome at the Ministry of Defence. In 1977 he became national secretary of the Fronte della Gioventù, chosen by Giorgio Almirante, secretary of the party that now called itself "MSI - Destra Nazionale". Fini had placed fifth among seven candidates elected in the national secretariat of the youth.

In the meantime, Fini had also graduated with a degree in pedagogy from La Sapienza University in Rome. He also collaborated with the party's newspaper, Il Secolo d'Italia, along with the youth movement magazine Dissenso.

Fini was first elected to the Chamber of Deputies on 26 June 1983 as a member of the MSI. Re-elected in 1987, in September he was nominated by Almirante to be his successor as the party's secretary.

In 2009 it emerged that as early as 1980 Almirante had identified Fini as one among a group of young Italians who were "young, non-fascist, non-nostalgic, who believe, as I do by now, in these institutions, in this Constitution. Because only in this way the MSI can have a future".[7]

From the Italian Social Movement to National Alliance

Giorgio Almirante died in May 1988, and at the party's congress in Sorrento that year, Fini defeated the right wing of the party, headed by Pino Rauti, and was elected party secretary. He remained in the national secretariat of the MSI until January 1990, when at the next party congress in Rimini, Pino Rauti was elected secretary. But in July 1991, after a tough electoral defeat in administrative and regional elections in Sicily, Fini returned to his role as party secretary. He held this post until the dissolution of party in 1995. 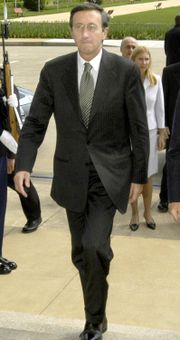 During his time as national secretary, he confirmed the MSI’s role as the inheritors of Benito Mussolini’s Fascist legacy with a number of famous polemical statements, including: "Dear comrades, MSI claims its right to refer to fascism" (1988), "We are fascists, the heirs of fascism, the fascism of the year 2000" (1991), "After almost half a century, the idea of fascism is alive" (1992), "There are phases where freedom is not among the key values" (1994), "Mussolini was the greatest Italian statesman of the twentieth century", "Fascism has a tradition of honesty, correctness and good government" (1994).[8]

In the autumn of 1993, Fini ran for mayor of Rome, garnering enough votes to participate in a runoff election that resulted in the victory of Francesco Rutelli. Nevertheless, for the first time an MSI candidate received significant support in a major election. Silvio Berlusconi, then an entrepreneur but not involved in politics, affirmed on that occasion his preference for Fini: "If I had to vote in Rome, my preference would go to Fini.[9]

After Berlusconi's election in 1994, for the first time in Italy's political history, an Italian government included four ministers from the MSI party, including the Deputy Prime Minister Giuseppe Tatarella, although Fini did not directly take part as a minister. (Fini was not a minister at that time.)

During the 1990s Fini gradually began to move the MSI away from its neo-fascist ideology to a more traditionally conservative political agenda. In January 1995, the Party's congress in Fiuggi marked a radical change, afterwards referred to as la svolta di Fiuggi (the turning point at Fiuggi) and merged the MSI with conservative elements of the disbanded Christian Democrats to form the National Alliance (AN), of which Fini assumed the presidency.

The new party took a decisive stance distancing itself from fascism. After the House of Freedoms' 1994 victory, Fini said there would not and could not be any return to fascism and frequently disavowed AN supporters who used the fascist salute.[10] Some MSI members (Pino Rauti, Erra, Staiti) dissented and seceded to form the new Tricolor Flame party.

Fini and his party have been part of Berlusconi's right-wing House of Freedoms coalition which won the 1994 and 2001 parliamentary election. Fini became deputy prime minister in 2001 and foreign minister in November 2004.

From February 2002 to 2006, he represented the Italian Government at the European Convention. Following the April 2008 general election, Fini was elected President of the Chamber of Deputies on 30 April 2008 on the fourth ballot, receiving 355 votes.

His most widely known legislative acts have been:

From National Alliance to the People of Freedom

After some discord between the party's factions in 2005, a congress dismantled the factions and confirmed Fini as president of the party.

In 2006, Fini announced the removal of the symbol of the flame and of the "M.S.I." writing from AN symbol. The move, after facing opposition from party members such as Maurizio Gasparri was finally denied.

Fini began a personal evolution towards more socially liberal positions in the 2000s, notwithstanding the opposition of the rest of his party. In particular:

At the end of January 2007, Berlusconi declared that Fini would be his only successor in case of unification of centre-right parties, provoking dissent from the Northern League and the Union of Christian and Centre Democrats (UDC).

In 2007 Berlusconi proclaimed the dissolution of his Forza Italia party and the birth of a new unitary party of the centre-right, the People of Freedom. At first, Fini reacted coldly, affirming that AN would not participate, judging the way the new party was born confused and superficial, and expressing open dissent against his ally of the "former coalition".

However, two months later, he moved closer to Berlusconi again, soon after the fall of the Prodi II Cabinet. They agreed to present the two parties under the same symbol of the People of Freedom in the April 2008 parliamentary election, and then to proceed towards a unitary centre-right party.

Speaker of the Chamber of Deputies

After the electoral victory, on 30 April 2008 after four rounds of voting, Fini was elected President (speaker) of the Chamber of Deputies, with 335 votes from a total of 611. He then resigned the presidency of AN in anticipation of unification with the new People of Freedom party. Within this new party, Fini became seen as Berlusconi's "heir apparent".[11]

Commenting on the homage to every victim of terrorism made by the President of the Republic, the former member of the Italian Communist Party (PCI) Giorgio Napolitano, he announced "the end of the post-war period", of "the cleavage between the right and society", and of "overcoming minority status".[12]

Pursuing his path of revision of the values of the Italian right, at the 2008 youth fest Atreju 2008 he asserted that the Right has to acknowledge those rights "present in the Constitution: freedom, equality and social justice. Values that determined and still determine the path of the Right, that are values of any democracy and that are fully anti-fascist".[13]

In his role of Speaker of the Chamber, he more than once rebuked the government, criticising their extensive use of the confidence votes.[14] He was considered a moderating force between Berlusconi's government and the President of the Republic,[15] eventually suggesting that Berlusconi should step down.[16]

He fought against the bad practices of absenteeism and double-voting by MPs in the Italian Parliament, promoting a digital voting system (to be implemented from March 2009) to prevent other MPs from voting on behalf of absent members, judging it "immoral"[17] 19 MPs out of a total of 630 refused, however, to allow their fingerprints to be recorded, and the system was implemented on a voluntary basis.

He also negatively judged the desire of the Berlusconi government to intervene with a decree in the case of Eluana Englaro[18] and supported the need to defend the secularism of the State, being then criticized by members of UDC and of his own party.[19] In recent times he has become more and more vocally critical of the government platform, which he considers too biased towards the far-right federalist coalition party Lega Nord. This has brought him into conflict with Berlusconi himself.

He founded the parliamentarian group "Futuro e libertà per l'Italia" (Future and Freedom for Italy) in hopes of establishing a centrist "third pole", similar to what Pier Ferdinando Casini had done with the Union of the Centre. In the 2013 Italian general election, the FLI (Future and Freedom for Italy) received only 0.5% of the vote and thus was awarded no seats in the Chamber of Deputies, ending Fini's 30 year parliamentary career.[20]

The strongest criticisms of Fini from the Right are related to moves away from the traditional policies of the party. Apart from the "Social Right" area of his traditional rival Pino Rauti, the right-wing intellectual Marcello Veneziani accused Fini of having lost any connection to right-wing thought (whether traditional, nostalgic, modern or conservative) and of representing an "astral" right, with no similarity to any other European right-wing group.[21]

Further criticism of Fini came from the Lega Nord with respect to some aspects of federalism and immigration, and from Forza Italia regarding justice.

Fini has lately been accused of being incoherent by some "theo-con" members, for holding socially conservative political positions while at the same time being separated and never married in Church.