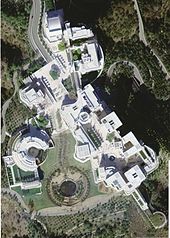 USGS satellite image of the Getty Center. The circular building to the left is the Getty Research Institute. The two buildings at the top are the Getty Trust administrative offices and the rest is the Museum.

The Getty Research Institute (GRI), located at the Getty Center in Los Angeles, California, is "dedicated to furthering knowledge and advancing understanding of the visual arts".[1]

In a statement upon his departure in 1992, Forster summarized his tenure as "Beginning with the rudiments of a small museum library... the center grew... to become one of the nation's preeminent research centers for arts and culture...".[4] In 1994, Salvatore Settis, a professor of the history of classical art and archeology in Italy, became the director of the Center.[6] By 1996, the Center's name had been changed to "Getty Research Institute for the History of Art and the Humanities",[7] and by 1999 it was known simply as "Getty Research Institute".[8]

Among GRI's special projects was "L.A. as Subject: The Transformative Culture of Los Angeles Communities" conducted between 1995 and 1999, whose purposes included "enhanc[ing] existing resources and develop new resources that support new research scholarship on LA and also encourag[ing] the preservation, conservation, and display of local material culture".[9]

In collaboration with local organizations, GRI published Cultural Inheritance/L.A.: A Resource Directory of Less Visible Archives and Collections in the Los Angeles Region in 1999.[10] In 2000, the L.A. as Subject project was transferred to the University of Southern California, which continues to update and expand an online version of the resource directory.[11]

When the Getty Information Institute (formerly the Art History Information Program, established in 1983) was dissolved in 1999 as a "result of a change of leadership at the Getty Trust",[12] GRI absorbed "many of its functions".[13][14]

Inside the Getty Research Institute Library

Among other holdings, GRI's research library contains over 1 million volumes of books, periodicals, and auction catalogs; special collections; and two million photographs of art and architecture.[18]

Already by 1985, the Getty had acquired the complete archive of the American sculptor Malvina Hoffman. In 2011, it acquired Harald Szeemann’s substantial archive, consisting of more than 1,000 boxes of correspondence, research files, drawings, and ephemera, as well as some 28,000 books and 36,000 photographs.[19] It also owns several art dealers' archives, including records for the Goupil & Cie and Boussod Valadon galleries, Knoedler Gallery, and the Duveen Brothers.[20]

The library is located at the Getty Center, and does not circulate its collections, but does extend library privileges to any visitor.[21]

Exhibitions and other events

GRI holds two public exhibitions per year in its two galleries which "focus primarily on the special collections of the Research Library or on work produced by artists in residence".[22] For example, in 2005–2006 GRI held an exhibition entitled "Julius Shulman, Modernity and the Metropolis".[23] The exhibition traveled to the National Building Museum[24] and to the Art Institute of Chicago.[25]

The residential scholars program seeks to "integrate the often isolated territory of art history into the wider sphere of the humanities".[5] The first class of scholars arrived in 1985–1986; they had their salaries paid for and their housing provided but were under "absolutely no obligation to produce".[5] Among the notable scholars was German writer Christa Wolf in 1993–1994, who wrote the novel Medea: a modern retelling during her year at GRI.[27][28][29]

Each year the scholars are invited to work on projects related to an annual theme.[30] In 2008–2009, the theme for the Getty Center was "Networks and Boundaries" and for the Getty Villa "The Power and Function of Ancient Images".[30] The lengths of stay vary: Getty scholars are in residence for three, six or nine months,[31] visiting scholars for one to three months,[32] and predoctoral and postdoctoral fellows for a nine-month academic year.[33] In 2011–12, the theme was "Artistic Practice".[34]

GRI publishes "Series Imprints" books in the categories of "Issues and Debates", "Texts & Documents", "Introduction To" (on "cultural heritage information in electronic form"), and "ReSources" (on the library's special collections).[35] In addition, GRI publishes exhibition catalogs and other materials in hardcopy form.[35]

Among the electronic databases from the former Getty Information Institute that GRI continues to produce are:

In 2006, GRI and the OCLC Online Computer Library Center announced that the Getty Vocabularies (Art & Architecture Thesaurus, Getty Thesaurus of Geographic Names, and Union List of Artist Names) will be available as a Web service.[40]

Until July 1, 2009, the Getty Information Institute and later GRI co-produced the Avery Index to Architectural Periodicals with the Avery Architectural and Fine Arts Library. On that date, GRI transferred the database back to Columbia University, which continues to maintain it.[41]