This is a list of former German colonies and protectorates (German: Schutzgebiete) established by the German Empire, Brandenburg-Prussia and the Habsburg Monarchy. This list may be incomplete, you can help by expanding it.

Main articles: Brandenburg-Prussia and German colonization of the Americas

These were colonies unsuccessfully settled by Brandenburg-Prussia (part of the Holy Roman Empire realm), after 1701 Kingdom of Prussia, before the foundation of the German Empire in 1871.

These territories were held briefly under lease or occupation during the early European colonization of the New World.

These were colonies of the Habsburg Monarchy, part of the Holy Roman Empire of German Nation realm until 1804, Austrian Empire after 1804, Austria-Hungary from 1867 to the end of World War I.

These are colonies settled by and controlled by the German Empire from 1884 to 1919. Those territories constituted the German Colonial Empire.

The following were German African protectorates: 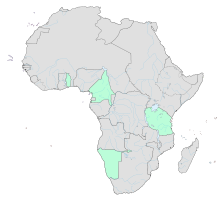 These were German colonies in the Pacific:

Colonial Possessions and Protectorates of the German Empire, 1883–1920, confirmed by Treaty, International Agreement, or Purchase

These Treaty ports were German concessions in China, leased to it by the Qing Dynasty: