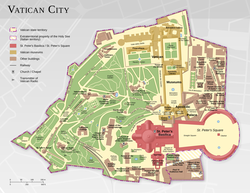 The geography of Vatican City is unique due to the country's position as an urban, landlocked enclave of Rome, Italy. With an area of 49 ha (121 acres, or 0.19 sq mi),[a] it is the world's smallest independent state. Outside the Vatican City, thirteen buildings in Rome and Castel Gandolfo (the pope's summer residence) enjoy extraterritorial rights. (One building, the Paul VI Audience Hall, straddles the border, but its Italian portion has extraterritorial rights.) The country contains no major natural resources, and no known natural hazards other than those that affect Rome in general, such as earthquakes.

The city state has the same climate as Rome: temperate, mild, rainy winters (September to mid-May) with hot, dry summers (May to September). 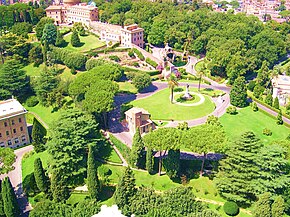 A view of the Gardens of Vatican City.

Vatican City sits on a low hill. The hill has been called the Vatican Hill (in Latin, Mons Vaticanus) since long before Christianity existed. An Etruscan settlement, possibly called Vatica or Vaticum, may have existed in the area generally known by the ancient Romans as "Vatican territory" (vaticanus ager), but if so no archaeological trace of it has been discovered.[3]

This is a list of the extreme points of Vatican City: the points that are farther north, south, east or west than any other location, as well as the highest and lowest points.

The nature of the estate is fundamentally urban and none of the land is reserved for significant agriculture or other exploitation of natural resources. The city state displays an impressive degree of land economy, born of necessity due to its extremely limited territory. Thus, the urban development (i.e., buildings) is optimized to occupy about half of the total area, while the rest is reserved for open space, including the Vatican Gardens. The territory holds many diverse structures that help provide autonomy for the sovereign state, including a rail line and train station, heliport, post office, radio station (with extraterritorial antennas in Italy), military barracks, government palaces and offices, public plaza, part of an audience hall, old defensive wall marking the border, institutions of higher learning, and cultural/art centers.

In July 2007, the Vatican accepted an offer that would make it the only carbon neutral state for the year, due to the donation of the Vatican Climate Forest in Hungary. The forest was to be sized to offset the year's carbon dioxide emissions.[4]