Geographical renaming is the changing of the name of a geographical feature or area. This can range from the change of a street name to a change to the name of a country. Some names are changed locally but the new names are not recognised by other countries, especially when there is a difference in language. Other names may not be officially recognised but remain in common use. Many places have different names in different languages, and a change of language in official or general use has often resulted in what is arguably a change of name. There are many reasons to undertake renaming, with political motivation being the primary cause; for example many places in the former Soviet Union and its satellites were renamed to honour Stalin. Sometimes a place reverts to its former name (see for example de-Stalinization). One of the most common reasons for a country changing its name is newly acquired independence. When borders are changed, sometimes due to a country splitting or two countries joining together, the names of the relevant areas can change. This, however, is more the creation of a different entity than an act of geographical renaming.

A change might see a completely different name being adopted or may only be a slight change in spelling.

In some cases established institutions preserve the old names of the renamed places in their names, such as the Pusan National University in Busan, South Korea; the Peking University in Beijing; Bombay Stock Exchange, IIT Bombay and the Bombay High Court in Mumbai; University of Madras, Madras Stock Exchange, the Madras High Court, and IIT Madras in Chennai; the University of Malaya, Keretapi Tanah Melayu, in Malaysia; and SWAPO (South West Africa People's Organization), the ruling party of Namibia.

Often the older name will persist in colloquial expressions. For example, the dish known in English as "Peking duck" retained that name even when the Chinese capital changed its transliteration to "Beijing".

Changes in romanisation systems can result in minor or major changes in spelling in the Roman alphabet for geographical entities, even without any change in name pronunciation or spelling in the local alphabet or other writing system. Names in non-Roman characters can also be spelled very differently when Romanised in different European languages.

China developed and adopted the pinyin romanisation system in February 1958 in place of previous systems such as the postal romanization and Wade–Giles. Many Chinese geographical entities (and associated entities named after geographical names) thus had their English names changed. The changes sometimes appear drastic, since it is sometimes the case that the former romanisations were derived from Cantonese—the common language in British-held Hong Kong—while the newer romanisations are derived entirely from Mandarin. However, the pronunciation in Mandarin has mostly stayed the same both before and after the change. Pinyin was adopted by the International Organization for Standardisation in 1982 and officially adopted in Singapore (resulting in several geographical name changes of its own). However it is usually not applied in the autonomous regions of the PRC (e.g. Lhasa, Ürümqi, Hohhot, Xigazê, Ili, Altay, Kaxgar, Hulunbuir, Erenhot, with a notable exception being place names in Ningxia, whose native Hui people speak Mandarin as their native language) and has not resulted in any geographical name change in the SARs of Hong Kong and Macau, and is adopted only in parts of Taiwan, particularly within Taipei and other Kuomintang controlled cities and counties, in a recent push to adopt Pinyin by the Kuomintang government.

In the People's Republic of China

In the Republic of China (Taiwan)

The introduction of the Revised Romanization of Korean in place of the McCune–Reischauer system in 7 July 2000 by the South Korean government has resulted in a string of changes to geographical names. The system is not used by North Korea. Examples of changes include:

For geographical entities with multiple pre-existing names in one or more languages, an exonym or endonym may gradually be substituted and used in the English language.

Changes resulting from splits and mergers

This is a list of internationally important or significant renamings. 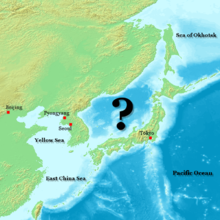