General Archive of the Indies

The Archivo General de Indias (Spanish pronunciation: [aɾˈtʃiβo xeneˈɾal de ˈindjas], "General Archive of the Indies"), housed in the ancient merchants' exchange of Seville, Spain, the Casa Lonja de Mercaderes, is the repository of extremely valuable archival documents illustrating the history of the Spanish Empire in the Americas and the Philippines. The building itself, an unusually serene and Italianate example of Spanish Renaissance architecture, was designed by Juan de Herrera. This structure and its contents were registered in 1987 by UNESCO as a World Heritage Site together with the adjoining Seville Cathedral and the Alcázar of Seville.

The origin of the structure dates to 1572 when Philip II commissioned the building from Juan de Herrera, the architect of the Escorial to house the Consulado de mercaderes of Seville. Until then, the merchants of Seville had been in the habit of retreating to the cool recesses of the cathedral to transact business.

The building encloses a large central patio with ranges of two storeys, the windows set in slightly sunken panels between flat pilasters. Plain square tablets float in the space above each window. The building is surmounted by a balustrade, with rusticated obelisks standing at the corners. There is no sculptural decoration, only the discreetly contrasting tonalities of stone and stucco, and the light shadows cast by the slight relief of the pilasters against their piers, by the cornices, and by the cornice strips that cap each window.

The building was begun in 1584 by Juan de Mijares, using Herrera's plans, and was ready for occupation in 1598, according to an inscription on the north façade. Work on completing the structure proceeded through the 17th century, directed until 1629 by the archbishop Juan de Zumárraga and finished by Pedro Sanchez Falconete.

Researchers who wish to examine the archive's sources use another building located across the street. 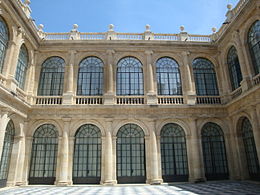 View of the main courtyard.

In 1785, by decree of Charles III the archives of the Council of the Indies were to be housed here, in order to bring together under a single roof all the documentation regarding the overseas empire, which until that time had been dispersed among various archives, as Simancas, Cádiz and Seville.[1] Responsibility for the project was delegated to José de Gálvez y Gallardo, Secretary for the Indies, who depended on the historian Juan Bautista Muñoz for the plan's execution. Two basic motivations underlay the project; in addition to the lack of space in the Archivo General de Simancas, the central archive of the Spanish Crown, there was also the expectation, in the spirit of the Enlightenment, that Spanish historians would take up the history of Spain's colonial empire. It was decided that, for the time being, documents evolved after 1760 would remain with their primary institutions.

The first cartloads of the documents arrived in October 1785. Some restructuring of the Casa Lonja to accommodate the materials was required, and a grand marble staircase was added in 1787, to designs of Lucas Cintara.

The archives are rich with autograph material from the first of the Conquistadores to the end of the 19th century. Here are Miguel de Cervantes' request for an official post, the Bull of Demarcation Inter caetera of Pope Alexander VI that divided the world between Spain and Portugal, the journal of Christopher Columbus, maps and plans of the colonial American cities, in addition to the ordinary archives that reveal the month-to-month workings of the whole vast colonial machinery, which have been mined by many historians in the last two centuries.

Today the Archivo General de Indias houses some nine kilometers of shelving, in 43,000 volumes and some 80 million pages, which were produced by the colonial administration:

View of a corridor with a cannon.

The structure underwent a thorough restoration in 2002–2004, without interrupting its function as a research library. As of 2005[update], its 15 million pages are in the process of being digitized. The digitized sources are accessible online [2]