Gaspar Corte-Real (1450 – 1501) was a Portuguese explorer who, alongside his father João Vaz Corte-Real (c. 1420-1496) and brother Miguel, participated in various exploratory voyages sponsored by the Portuguese Crown. These voyages are said to have been some of the first to reach Newfoundland and possibly other parts of eastern Canada.

Gaspar was born into the noble Corte-Real family on Terceira in the Azores Islands,[1] the youngest of three sons of João Vaz Corte-Real, also a Portuguese explorer, and had accompanied his father on his expeditions to North America. His brothers were also explorers.[2]

In 1498, King Manuel I of Portugal took an interest in western exploration, likely believing that the lands recently discovered by John Cabot were within the realm of Portuguese control under the Treaty of Tordesillas. Corte-Real was one of several explorers to sail west for Portugal.[3]

In 1500, Corte-Real reached Greenland, believing it to be east Asia, but was unable to land. He set out on a second voyage in 1501, taking three caravels. The expedition was again prevented from landing at Greenland due to frozen seas. They changed course, and landed in a country of large rivers, pine trees, and berries, believed to be Labrador. There it is believed they captured 57 indigenous people, who were taken back to Portugal to be sold into slavery to assist in financing the voyage.[4] Two of the expedition's three ships made the return trip to Portugal, but the ship carrying Corte-Real was lost.[3]

Nothing more was heard of Gaspar Corte-Real after 1501. His brother Miguel attempted to find him in 1502, but he too never returned.[5] 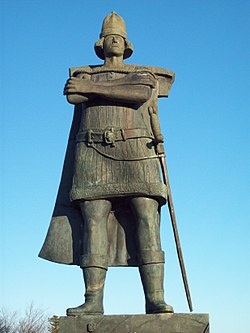 A statue of Gaspar Corte-Real, located in the city of St. John's, Newfoundland.

There is debate amongst historians about the relative importance of Corte-Real. “He is a minor figure about whom very, very little is known with confidence,” stated Memorial University of Newfoundland historian Jeff Webb in a 2017 interview.[4] The 20th-century myth-building of Corte-Real was largely the work of historian-diplomat Eduardo Brazao,[6][7] the former National Secretary of Portugal's propaganda ministry, the Secretariado Nacional de Informação, Cultura Popular e Turismo,[8][9] during the regime of António de Oliveira Salazar.[10]

There is a statue of Gaspar Corte-Real located in front of the Confederation Building in St. John's, Newfoundland and Labrador.[11] It was presented under the banner of the Canadian Portuguese Fisheries Organisation in 1965 to commemorate the hospitality of Newfoundlanders towards Portuguese Grand Banks fishermen.

In early 1999, a car, apparently chauffeured by a speeding tourist, slammed into the pedestal that supports the statue. The statue itself was unscathed, but its base was mangled. Later that year, Ottawa bronze restoration specialist Craig Johnson subcontracted local foundry Sculptures to undertake the repairs while Johnson himself repainted the statue. According to local sculptor Will Gill, who did some of the work, no scars remain from the accident and Corte-Real was returned to his original condition.[12]

In 2020, it was noted that the statue, designed by Estado Novo propagandist Martins Correa, was erected as part of a behind-the-scenes fisheries rights conflict between Salazar and Spain's Francisco Franco.[13] On June 11, 2020, Newfoundland and Labrador Premier Dwight Ball was quoted as saying the government would review politically-sensitive provincial statues.[14] Author Edward Riche noted on June 20, 2020, "If enough people now see the statue of Corte-Real as memorializing a character who enslaved Indigenous people during his imperial ventures, we have a problem."[15] The statue controversy made headlines in Portugal the same day, quoting York University professor Gilberto Fernandes, who stated the statue symbolizes “a colonialist, Eurocentric and white supremacy narrative that underlies Canada's dominant institutions.”[16]

On June 28, 2020, it was reported that Todd Russell, president of NunatuKavut, which represents Inuit in central and southern Labrador, "doesn't need any more consultation — he wants it taken down."[17] The Indigenous affairs officer at Memorial University of Newfoundland's Grenfell campus stated that the statue "continually reinforces that history started with Europeans. Of course, we know that that's not true, but that's not what is memorialized."[18] On July 8, 2020, it was reported that the statue had been spray-painted with the phrases “Slaver” and “Why is this guy still here?”[19] Various opinion pieces and letters to the editor called for the statue's removal.[15][20][21]

A street in Mount Pearl is named for Corte-Real. A building at Memorial University of Newfoundland's St. John's campus was formerly named after Corte-Real. In December 2019, the Board of Regents voted to change its name to the Global Learning Centre, after prompting by the Internationalization Office that the building presently houses.[22]