Haute-Gaspésie—La Mitis—Matane—Matapédia Chic-Choc Mountains Magdalen Islands
This article is about the Gaspé or Gaspésie peninsula. For the Quebec provincial administrative region, see Gaspésie–Îles-de-la-Madeleine. For the municipality, see Gaspé, Quebec. For other topics, see Gaspé (disambiguation).
Region in Quebec, Canada

The Gaspésie (official name), or Gaspé Peninsula, the Gaspé or Gaspesia, is a peninsula along the south shore of the Saint Lawrence River to the east of the Matapedia Valley in Quebec, Canada, that extends into the Gulf of Saint Lawrence. It is separated from New Brunswick on its southern side by the Baie des Chaleurs (Chaleur Bay) and the Restigouche River. The name Gaspé comes from the Mi'kmaq word gespe'g, meaning "end", referring to the end of the land.[2]

The Gaspé Peninsula is slightly larger than Belgium, at 31,075 square kilometres (11,998 sq mi).[3] The population is 140,599 as of the 2011 census.[4] It is also noted as being the only region outside the Channel Islands to contain native speakers of Jersey Norman.

Mount Albert (Mont Albert) at 1,151 m (3,776 ft)[6] is another high mountain in the Chic-Chocs. Its summit, an alpine area above the tree line, is a nearly flat plateau about 13 km (8 mi) across composed of serpentine bedrock and supporting a quite unusual flora.[7] The ascent of Mount Albert from near sea level is challenging, but popular with hikers, offering a view of the St. Lawrence and the Côte-Nord, the river's north shore, part of the ancient bedrock of the Canadian Shield.

The interior portions of the peninsula are dominated by the Chic-Choc Mountains, part of the Notre Dame Mountains, an extension of the Appalachian Mountains.

The town of Murdochville, at about 660 metres (2,170 ft) above sea level, has had a varied history, and is now home to several wind turbines. It is reached by Route 198, which extends inland from the northern shore of the peninsula, soon climbing into the mountains and entering vast forests, crossing several small rivers before reaching the town. From Murdochville, Route 198 follows the York River to the city of Gaspé on the peninsula's eastern tip.

The economy of the peninsula has historically been focused on fishing, agriculture and forestry. However, primary resource based industries are suffering due to overfishing, overexploitation and fewer numbers of farmers in business, forcing the region to move towards tourism and the services industry. 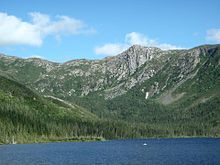 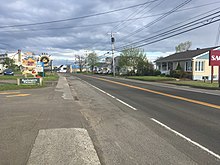