Gary Faye Locke (born January 21, 1950) is an American politician and diplomat who served as the 10th United States ambassador to China (2011–14). He was previously the 21st governor of Washington (1997–2005) and served in the Obama administration as United States Secretary of Commerce (2009–11). Locke is the first governor in the continental United States of East Asian descent and the only Chinese American ever to have served as a governor of any state. He was also the first Chinese American to serve as the U.S. ambassador to China.[2]

Gary Locke was born on January 21, 1950, in Seattle, and spent his early years living in the Yesler Terrace public housing project. A third-generation Chinese American with paternal ancestry from Jilong village,[3] Taishan, Guangdong, China, Locke is the second of five children of James Locke, who served as a staff sergeant in the U.S. Fifth Armored Division during World War II. James Locke's wife, Julie, is from Hong Kong,[4] which at that time was a British Crown Colony. His paternal grandfather left China in the 1890s and moved to the United States, where he worked as a houseboy in Olympia, Washington, in exchange for English lessons.[5] Locke did not learn to speak English until he was five years old and entered kindergarten.[6]

Locke graduated with honors from Seattle's Franklin High School in 1968. He achieved Eagle Scout rank and received the Distinguished Eagle Scout Award from the Boy Scouts of America.[6][7] Through a combination of part-time jobs, financial aid, and scholarships, Locke attended Yale University, graduating with a Bachelor of Arts in political science in 1972.[8] He received his Juris Doctor from Boston University School of Law in 1975.

In 1982, Locke was elected from a South Seattle district to the Washington House of Representatives, where he served as the chair of the Appropriations Committee. Eleven years later, in 1993, Locke was elected King County's executive, defeating incumbent Tim Hill.

In 1996, Locke won the Democratic primary and general election for governor of Washington, becoming the first Chinese American governor in United States history. His political committee was fined $2,500 by regulators in 1997 after admitting to state campaign finance law violations.[9]

Locke faced criticism from fellow Democrats for embracing the Republican Party's "no-new-taxes" approach to Washington's budget woes during and after the 2001 economic turmoil. Among his spending-reduction proposals were laying off thousands of state employees; reducing health coverage; freezing most state employees' pay; and cutting funding for nursing homes and programs for the developmentally disabled. In his final budget, Locke suspended two voter-passed school initiatives and cut state education funding. Supported by the state's political left, former Washington Supreme Court Justice Phil Talmadge announced his plans to challenge Locke in the 2004 Democratic primary, but Talmadge ended his campaign early for health reasons; Locke won reelection in 2000.

On the national stage, Democrats saw Locke as a possible vice-presidential choice. In 1997, he was a guest at the State of the Union address.[10]

Locke was chosen to give his party's response to George W. Bush's 2003 State of the Union Address.[11] In a surprise move, Locke announced in July 2003 that he would not seek a third term,[12] saying, "Despite my deep love of our state, I want to devote more time to my family."[12] Susan Paynter, a columnist at the Seattle Post-Intelligencer, suggested that racist slurs, insults, and threats that Locke and his family received, especially after his rebuttal to Bush's State of the Union address, may have played a role in Locke's decision to leave office after two terms.[13] The governor's office received hundreds of threatening letters and emails; others threatened to kill his children.[13] His official portrait, painted by Michele Rushworth, was unveiled in the state capitol by Governor Christine Gregoire on January 4, 2006.

After leaving office, Locke joined the Seattle office of international law firm Davis Wright Tremaine LLP, in their China and governmental-relations practice groups. During the leadup to the 2008 Democratic presidential primary, Locke signed was Washington co-chairman of Hillary Clinton's campaign.[14] 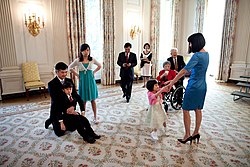 Locke's family awaiting the arrival of President Barack Obama in the White House on May 1, 2009

On December 4, 2008, the Associated Press reported that Locke was a potential candidate for Secretary of the Interior in then-President-elect Barack Obama's cabinet. Eventually, then-Colorado Senator Ken Salazar was nominated for that position instead.

On February 25, 2009, Locke was announced as Obama's choice for Secretary of Commerce,[9] and his nomination was confirmed by the United States Senate by unanimous consent on March 24.[15] Locke was sworn in March 26 by District Judge Richard A. Jones,[16] and by Obama on May 1. Locke was the first Chinese American Secretary of Commerce, and one of three Asian Americans in Obama's cabinet, joining Secretary of Energy Steven Chu and Secretary of Veterans Affairs Eric Shinseki. Politico reported Locke was a popular cabinet member among both businesses and the executive branch.[17] A declaration of assets made in March 2011 showed Locke to be the sixth-richest official in the U.S. executive branch.[18] 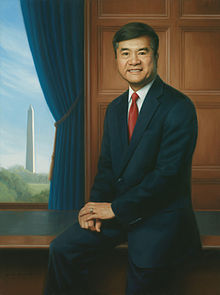 Gary Locke's official portrait for the U.S.Department of Commerce was painted by Michele Rushworth

Chen Guangcheng (left) with Locke (center) and Kurt M. Campbell (right) at the U.S. Embassy in Beijing on May 1, 2012

Following the resignation of Jon Huntsman, Jr., Obama nominated Locke to serve as United States Ambassador to China.[19] The Senate confirmed Locke unanimously on July 27, 2011;[20] Locke resigned as Secretary of Commerce on August 1.[21]

A photo of Locke carrying his own knapsack and ordering his own coffee at the Seattle-Tacoma International Airport went viral in China on the Sina Weibo social network, with many commentators approving of his humble, low-key style.[22][23][24] At his first news conference after arrival in Beijing, Locke pledged to promote bilateral cooperation and understanding between the two countries.[25]

Early in Locke's ambassadorship, Chinese dissident Chen Guangcheng escaped from house arrest and sought refuge in the U.S. Embassy in Beijing in April 2012. On May 2, China's Ministry of Foreign Affairs demanded an apology from the U.S. for its role in the incident.[26] In an editorial on May 4, Beijing Daily questioned Locke's motives by taking Chen in,[18] describing Chen as "a tool and a pawn for American politicians to blacken China."[27]

In late November 2013, Locke announced that he would step down as ambassador to spend more time with his family in Seattle. In an analysis of his ambassadorship, Sun Zhe, a professor at Tsinghua University in Beijing, said, "It is not an easy job to be the American ambassador to China. Gary Locke is not a shining star, but a simple and unadorned ambassador." Shen Dingli, dean of the international studies department at Fudan University in Shanghai, largely concurred, commenting that Locke "showed us how a U.S. minister-level official behaves by taking economy-class flights" but "caused a twist" when he allowed Chen refuge in the U.S. embassy.[28] Max Baucus, a former United States Senator from Montana, was Obama's nominee to replace Locke and was confirmed by the Senate 96–0; Vice President Joe Biden administered the oath of office on February 21, 2014.[29]

On May 31, 2016, Locke joined the board of the Seattle-based global health nonprofit PATH.[31]

Locke has been a major proponent of affirmative action in Washington State. He publicly endorsed I-1000 in the 2019 Washington State general election. Those efforts were overturned by a majority of voters in the state of Washington in 2019.[32]

In 2020, Locke was featured in a Trump reelection ad, portraying him with Joe Biden and falsely suggesting he was an official of the Chinese Communist Party.[33]

Locke was named the interim president of Bellevue College in May 2020, following the resignation of the college's president due to a controversial defacement of a campus mural.[1]

Lee's parents immigrated to the United States from Taiwan, and their ancestral roots in Mainland China include Shanghai (paternal) and Hubei (maternal). Mona Lee's father Larry has a half-sister Nora Sun, daughter of Sun Fo and granddaughter of Sun Yat-sen, father of modern China.[38] The Lockes have three children: Emily Nicole (b. March 1997), Dylan James (b. March 1999), and Madeline Lee (b. November 2004).[39]

When asked if there is place for Asian Americans in politics, Locke had this to say:

"I think our native cultures have emphasized respect for our elders, care of our elders, but also focusing on education. But my overall response is that Asian Americans are part and parcel of the great success of America. Our grandparents came over in the 1800s to work in the railroads, work the lumber camps, goldmines, worked in the canneries, farmland that most people thought could never raise a crop, worked as merchants in cities that were just emerging. They fought in world wars, died for our freedoms and our liberties. Asian Americans have given our blood, sweat and tears to the communities and to this country. There's a prosperity that we on the west coast enjoy. So much of the prosperity and progress of the western states is because of the blood, sweat and tears of Asian Americans. From doing the dirty work to fighting in our world wars and contributing to our society now as doctors, researchers, people in high tech, as innovators, in all different professions. We have every right, indeed a responsibility, to help set the policies that will move our communities and our nation forward."[41]