The company is notable for its SG 10.0-193 wind turbine, the largest variant based on the Siemens D7 Platform, as well as being one of the largest wind turbines in the world. Its main competition will be the General Electric Haliade-X and the MHI-Vestas V164.[4]

Gamesa began operations in 1976 as Grupo Auxiliar Metalúrgico S.A., focused at that time on developing new technologies and applying them to emerging activities. These included robotics, microelectronics, aeronautics and the development of composite materials. It was founded by Juan Luis Arregui and Joseba Mikel Grajales.[5]

In 1994, Gamesa Eólica was created as a subsidiary specializing in the manufacture of wind turbines. The company became involved in the development, construction and operations of wind farms in 1995 and completed its first wind farm the following year. Gamesa had a 7-year partnership with Vestas that ended in 2002.[6]

The Corporation was officially listed on the stock exchange on 31 October 2000 and joined the selective IBEX 35 on 24 April 2001. In 2002, Gamesa acquired gearboxes manufacturer Echesa, generators manufacturer Cantarey, and converters manufacturer Enertrón.

As part of the United Kingdom's move to expand its production of offshore wind energy production, Gamesa has committed to the expenditure of £133.7 million on a production factory and other facilities in the UK, and will also move its offshore wind division headquarters to London.[7][8]

In January 2014, Gamesa and French nuclear manufacturer Areva announced a preliminary deal to create a joint venture Adwen in the offshore wind power business.[9]. In 2017, Areva sold its stake in Adwen to Gamesa, after the merger of Gamesa and Siemens Wind Power was announced.[10][11]

History of Siemens Wind Power A/S started in 1980, when Danish irrigation system manufacturer Danregn diversified into the windturbine business. Its first wind turbines were machines with rotor diameters of around 10 m (33 ft) with generator powers of 20 to 30 kW (27 to 40 hp).[12][13][14] In 1981, the wind activities were separated into newly established company Danregn Vindkraft A/S, established by Peter Stubkjær Sørensen and Egon Kristensen in Brande, Denmark, with a capital of 300,000 kroner; the company's product was a 55 kW (74 hp), 15 m (49 ft) blade diameter turbine.[12][14][15][16]

The company changed its name from Danregn Vindkraft to Bonus Energy in 1983, an easier name for the English speaking North American market.[13][17]

In 1991, eleven 450 kW Bonus turbines were installed in the Vindeby Offshore Wind Farm, the first offshore wind farm in the world.[18][19]

The company sourced its first blades from Viborg based company Økær Vind Energi.[20] Later it sourced blades from LM Wind Power. In the late 1990s Bonus began to develop its own blades, beginning production in the early 2000s in Aalborg.[21][note 1] 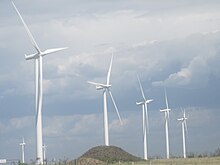 In 2006, Siemens acquired a former LM Glasfiber wind turbine blade factory in Engesvang, Denmark.[24] In 2007, it constructed a blade factory in Fort Madison, Iowa, United States.[25] A hub factory in Ølgod began production in 2008.[26] A nacelle manufacturing plant was opened in Hutchinson, Kansas in December 2010.[27][28] Additionally Bonus Energy sales and service partner company AN Windenergie GmbH in Bremen (Germany) was acquired in 2005.[25][29]

A factory established in Linggang (Siemens Wind Power Blades (Shanghai) Co., Ltd.) near the Yangshan Deep Water Port began production in 2010.[40] Additionally in December 2010 Siemens announced it would install a blade factory at an existing unused facility in Tillsonburg, Ontario, Canada.[41] In early 2011 Siemens and ABP announced the development of a £210 million turbine assembly plant, and dock development at Alexandra Dock, in Kingston upon Hull, UK.[42][43]

In May 2011 testing began of a prototype 6 MW direct drive design with a 120 to 154 m (394 to 505 ft) rotor, the design was launched as a product in November 2011.[44] In 2013 Siemens announced a development of its 3.6 MW design, the SWT 4.0–130 which used a rotor of diameter 130m with 4 MW rated power. At the same time the company introduced new product platform codes for its products, with 'G' indicating geared drive, and 'D' indicating direct drive, suffixed by a number indicating an approximate power class. The four initial product ranges were Siemens G2, G4, D3 and D6.[45]

In July 2012, the company agreed to supply DONG Energy with 300 direct drive, 75m blade, 6 MW SWT-6.0–154 turbines for the English offshore market from 2014. Two turbines are to be installed for testing at the Gunfleet Sands offshore wind farm.[46] The value of the contract was estimated at over £2 billion.[47][48] Prototype 6 MW machines were installed at the Gunfleet Sands 2 wind farm in 2013;[49] with the first full scale commercial installation of 6 MW machines at the 210 MW Westernmost Rough wind farm in 2014.[50] In September 2012 Siemens Wind announced the lay off of 615 of a workforce of around 1650 workers in the United States, citing reduced demand for wind turbines due to uncertainty concerning future tax break incentives in the USA for wind power.[51] (see United States Wind Energy Policy.)

In March 2014 Siemens and Associated British Ports (ABP) finalised the 2011 MOU to build a turbine factory in Hull, UK (Green Port Hull), and announced an additional facility near Paull, East Riding of Yorkshire, east of Hull which would manufacture rotor blades for turbines.[52][53] In 2014 the planned factory at Paull was abandoned, with all production to be concentrated at the Alexandra dock site.[54] Revised plans for the site submitted April 2015 included only a blade manufacturing factory at the site with no nacelle production.[55]

In early 2015 Siemens announced it had reached agreements to build 2 GW of wind turbines in Egypt, and to construct a blade factory in that country, as part of a larger power generation agreement.[59][60] The €8 billion, 16.4 GW energy development deal was signed in June 2015, including an approximate 1000 worker blade factory in Ain Soukhna and 12 wind farms (600 turbine, 2 GW) in the Gulf of Suez and west Nile areas of Egypt.[61]

In August 2015 Siemens announced it was to construct a new nacelle manufacturing plant at Cuxhaven, Germany, an investment of £200 million. The plant was expected to become operational mid 2017, and employ 1000 people.[62][63] A €100 million blade plant to be built in the Tanger Automotive City (near Tanger-Med port) in Morocco was announced in early 2016.[64][65]

In February 2017 Siemens announced the closure of the Engesvang blade factory (Denmark), with the loss of 430 jobs, citing the plants inability to produce larger size blades.[66][67]

On 17 July 2016 Siemens and Gamesa announced their plan to merge their wind businesses, with the 59% stake of Siemens and the 41% stake of former Gamesa shareholders in the resulting company. Siemens paid €1 billion cash for its stake in Gamesa. The resultant company was headquartered in Spain, with an offshore operations headquartered in Hamburg, Germany and Vejle, Denmark. The combined business was the largest wind turbine manufacturer worldwide by installed capacity (~69 GW).[68][69] The merger became effective on 3 April 2017.

Siemens Wind has R&D, and production facilities in Brande, Denmark. Blade production is located in Aalborg (Denmark), Tanger Automotive City (Morocco), Linggang (China), Fort Madison, Iowa (USA) and Tillsonburg, Ontario (Canada); with factories under construction or planned (2016) for Kingston upon Hull (UK) and Ain Soukhna (Egypt). By 2018, the hub factory in Ølgod was moved to the production in Brande.

Other established production sites included nacelle manufacture at Hutchinson, Kansas (USA, 1.6 GW).[71] As of 2018 the new offshore nacelle plant has been opened at Cuxhaven (Germany).

Siemens Gamesa is listed on the Dow Jones Sustainability Index,[73] the FTSE4Good Index[74] which is concerned with corporate social responsibility on the KLD Global Climate 100 Index, and on the Global 100 Index of the 100 most sustainable companies in the world.[75]