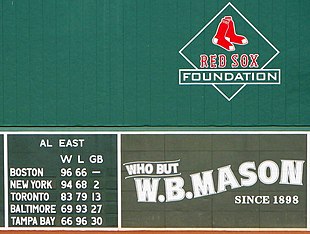 A partial view of the Green Monster at Fenway Park, with standings for the American League East division, including a "GB" column

In most North American sports, the phrase games behind or games back (often abbreviated GB) is a common way to reflect the gap between a leading team and another team in a sports league, conference, or division.

Games behind is calculated by using either of the following formulas, in which Team A is a leading team, and Team B is a trailing team. Example math in this section uses the above standings, with Montreal as Team A and Atlanta as Team B.

A games behind calculation can be misleading when attempting to compare teams that have played an unequal number of games. This is because the games behind calculation simply computes the difference between wins and losses for each team, and then averages those two numbers. Essentially, this treats each unplayed game as being a ​1⁄2 win and a ​1⁄2 loss.

In an extreme example, attempting to compare the records of the 2007 New England Patriots (16–0; 1.000 winning percentage) and the 1972 Detroit Tigers (86–70; .551 winning percentage) finds that the teams are equivalent per a games behind calculation, as each team won 16 more games than it lost. However, the Tigers played 140 more games than the Patriots. The Patriots' 140 "unplayed" games are essentially treated as 70–70; indeed, if the 16–0 Patriots had 70 more wins and 70 more losses, their 86–70 record would match that of the Tigers.

In reality, teams in an actual sports league can have an unequal number of games played due to various scheduling anomalies, postponements, or cancellations. This can result in:

Such conditions have occurred multiple times in major sports leagues, examples include:

Leagues generally use winning percentage to order teams in official standings; however, standings appearing in newspapers or online may order teams based on games behind. 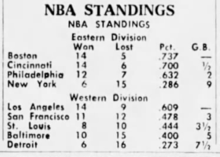 NBA standings in November 1965 as published in The Minneapolis Star

The games behind calculation is often used in professional baseball and basketball, where tie games are not permitted.[a] Standings for these sports appearing in print or online during a season usually will have teams ordered by winning percentages, with a "GB" column provided as a convenience to the reader. Games behind is used less often in American football, where ties are possible but relatively uncommon. Games behind is rarely used in ice hockey and soccer, where ties are traditionally common and standings points are typically used.

In the 1994 MLB season, the American League and National League each split into three divisions, and each added a wild card team to the playoffs. Following this change, it became common for the media to publish an additional set of standings for the wild card race. It included all teams from a league, with the exception of the division leaders, and games behind was calculated with respect to the team with the highest standing in the wild card race.

National Basketball Association (NBA) standings typically report games behind within each five-team division. However, it is not as closely followed as in baseball, because more teams qualify for the NBA playoffs, and the divisional statistics are not as important for playoff qualification. Sometimes, especially nearing the end of the regular season, games behind will be given with respect to the eighth position in the Eastern Conference and Western Conference, as the eighth position is the last to qualify for the playoffs in each conference. 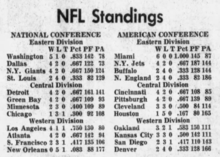 National Football League (NFL) standings sometimes report games behind, although the statistic is not emphasized; winning percentage is used, computed from each team's win–loss–tie record. This is especially true since the introduction of the bye week in 1990, exacerbating differences in the number of games that teams have played at various points in time, and since tied games (while highly uncommon since the introduction of overtime in the regular season starting in 1974) do still occur on occasion. Games behind is omitted from standings on the NFL's website and is absent from most published standings.

The games behind statistic is eschewed in sports where tie games are traditionally common, such as the ice hockey and soccer. Leagues in these sports typically rank teams by awarding a certain number of points for each win or tie. In competitions where ties have been abolished (especially in hockey), points are still awarded for an "overtime loss" such that they are often (but not always) the same value as ties previously were, while in soccer the traditional value of two points for a win has been replaced by three points, while ties are still worth one point. These changes would make calculating a "games behind" statistic even more complicated compared to if it were to be used under the traditional system in which a tie was effectively worth a "half-win."

The Canadian Football League (CFL) also does not use games behind, and awards standings points. However, unlike leagues such as the National Hockey League (NHL) the CFL does not award points for overtime losses, although it experimented with such a system in the early 21st century. Also, unlike most other football codes which use a point system the CFL still uses the traditional values of two points for a win and one for a tie. Therefore, a tie in the CFL is still effectively worth a "half-win" as it always has been in Canadian football (and also as it has been in the NFL since 1972).

Teams are sometimes referred to as being over or under "five hundred", in comparison to a .500 winning percentage. The calculation for this is simple subtraction (there is no division by two). For example, a team at 55–50 is "five games over five hundred", while a team at 40–50 would be "ten games under five hundred". 'Above' and 'below' can be substituted for 'over' and 'under', respectively.