Galkayo (Somali: Gaalkacyo, Arabic: جالكعيو‎, also known in Italian as Gallacaio or formerly Rocca Littorio[2]) is the capital of the north-central Mudug region of Somalia.[3] The city of Galkayo is divided into two administrative areas separated by a distinct boundary, with 3 of the 5 districts governed by the Puntland State and one southern district governed by Galmudug state. It is the third largest city in the whole of Somalia.[4]

Following independence, Galkayo was made the center of the Galkayo District. The city has grown considerably in recent times and serves as a commercial hub.[8] According to the UNDP it had a population of 750,667 in 2018.[9]

Following the independence of Somalia in 1960, Gaalkacyo was made the center of Galkayo District and the capital of Mudug region.[10]

Galkayo is situated in the north-central part of Somalia, and is one of the most developed towns in the region.[18] The city is divided into four main districts called Garsoor, Hormar, Israac is part of Puntland.,[19] and Wadajir districts respectively.

Although relatively stable compared to southern Somalia,[8] sporadic targeted assassination attempts by Al-Shabaab militants against Puntland public officials led in 2010–2011 to a police crackdown and comprehensive administrative reform.[20][21] The Puntland and Galmudug administrations subsequently signed an accord in Garowe in February 2011, officially agreeing to cooperate on security, economic and social matters so as to strengthen inter-regional relations.[22] 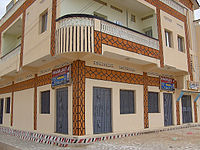 An electronics store at a Galkayo shopping mall.

A lively trading city, Galkayo is a center for local business.[2][18] Hotels, guest houses, restaurants, supermarkets and newly erected office blocks earmarked for the government and NGOs line the streets, juxtaposed by the tall minarets of masjids. The city also offers numerous social services such as hospitals, petrol stops and police stations, with the former Somali Army barracks kept in good condition and renovated.[8]

Moreover, Galkayo is a hub of calligraphic art, serving as a training ground of sorts for local visual artists. Elaborate murals and phrases in Arabic and English adorn the walls of the city's many office and shop buildings.[8]

It has an estimated population of 245,000 inhabitants as of 2015.[23] Somalia Clan tensions in the area have historically been high.[24] Puntland areas of the city such as Israac, Hormar and Garsoor neighborhoods of Galkayo is primarily inhabited by Somalis from the Umar Mahmoud sub clans Majeerteen (Darood), Carab Salah (Meheri), and Leelkase (Darood) clans.[25] The Leelkase, and Majeerteen are mainly the dominant clans in many parts of Galkayo.[26] Three of the four quarters in the city, Israac, Horumar and Garsoor, controlled by Puntland, accounts for majority of the population in Galkacyo.[27]

Neighborhood of Wadajir in southern area of the city is mainly inhabited by the Sa'ad Habar Gidir, a Hawiye clan.[28][28][24] The Saleban Abdalle sub-clan of the Dir are well represented. 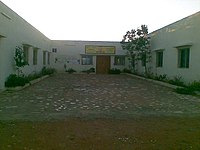 Galkayo has a number of academic institutions. According to the Puntland Ministry of Education, there are 40 primary schools in the Galkayo District. Among these are the Axmed Guray school in Israac, named after Imam Ahmad ibn Ibrahim al-Ghazi (Ahmed Gurey); Al-Qudus in Horumar; and Barkhadle in Garsoor, built in honour of the 13th century scholar and saint Yusuf bin Ahmad al-Kawneyn (Aw Barkhadle).[29] Puntland secondary schools in the area include Haji Ali Bihi, Cumar Samatar Secondary School (CSSS), Yasin Nor Hassan and Galkayo High.[30][31] In addition, several new schools were opened in 2012.[32]

Galkayo is home to Abdullahi Issa Stadium, a sporting facility which is named in memory of Abdullahi Issa, the first Prime Minister of Somalia. The stadium hosts to many local football clubs including FC YAMAYS, RPS FC, Dowladda Hoose FC, Homboboro FC, Telecom FC and Galcom FC.[36] In addition, the city has various courts set aside for basketball. It soccer fields and volleyball.

Air transportation in Galacyo is served by the Abdullahi Yusuf Airport, operated by Puntland[37] and Oshaco International Airport operated by Galmudug.[38] In September 2013, the Somali federal government signed an official cooperation agreement with its Chinese counterpart in Mogadishu as part of a five-year national recovery plan. The pact will see the Chinese authorities reconstruct several major infrastructural landmarks in the Somali capital and elsewhere, as well as the road linking Galkayo with Burao.[39]

Various media organizations are based in Galkayo. These include Radio Daljir, Radio Galmudug and Radio Codka-Mudug. Radio Gaalkacyo, formerly known as Radio Free Somalia, also broadcasts from the city.[40]

Domesticated ostrich at the Taar City Hotel in Galkayo.

Several establishments in Galkayo offer accommodation. Among these hotels and guest houses are the Kamaal Hotel, the Classic Hotel and Restaurant, and the Saylan Hotel. The Taar City Hotel is especially noted for its domesticated ostriches.