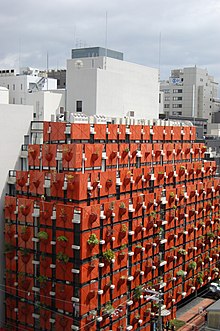 Divano modulabile (2005) inspired by Michetta, a typical bread from Milan

Gaetano Pesce (born 8 November 1939) is an Italian architect and a design pioneer of the 20th century.[1] Mr. Pesce was born in La Spezia in 1939, and he grew up in Padua and Florence.[2] During his 50-year career, Mr. Pesce has worked as an architect, urban planner, and industrial designer.[3][4] His outlook is considered broad and humanistic, and his work is characterized by an inventive use of color and materials, asserting connections between the individual and society, through art, architecture, and design to reappraise mid-twentieth century modern life .[5][6][7][8]

Mr. Pesce studied architecture at the University of Venice, with such notable teachers as Carlo Scarpa and Ernesto Rogers. Between 1958 and 1963, Mr. Pesce participated in Gruppo N, an early collective concerned with programmed art patterned after the Bauhaus. Since the 1960s, Gaetano Pesce has been known to relate art to the design of interiors, products, and architecture.[9][10] The New York Times critic Herbert Muschamp described Mr. Pesce as "the architectural equivalent of a brainstorm." [11] Pesce's well known work includes Organic Building in Osaka, Japan, a Landmark vertical garden building designed to concealing a complex, computer-controlled hydration system to sustain plant growth, and the interior architecture of the Chiat/Day offices, an early workplace village modeled after urban life.[12] Among Mr. Pesce's architecture achievements are Les Halles ACIH (1979) and Parc de la Villette (1985), Paris, France, a complex of forms shaped like a running child.[13]

Since the 1960s, Mr. Pesce has researched the function and form of utilitarian and decorative objects, including furniture, jewelry, and shoes, from the perspective of human emotion, environment, and production. Mr. Pesce is known for innovative high-minded modern design with wit and style.[30] Mr. Pesce has challenged accepted standards of abstraction, uniformity, and homogeneity. On the architect designer, critic Susan Slesin wrote, "For Gaetano Pesce, to be modern is to face the world squarely and use design as a means to comment on it.[31] Mr. Pesce has expanded the established notions of Modernism through the creation functional, imperfect, and warm product design.[32] He connects art and society to design through organic form, for production by B&B Italia (formerly C & B Italia),[33] Vitra, Cassina, and fabric design, such as People (1987), composed of 570 different figures, all of which incorporate ideas about variation and diversity in contemporary society.[34][35]

Pesce's iconic feminist armchair - a fulsome bulbous form and attached ball-shaped ottoman - alternately referred to as La Mamma, Big Mama, Donna, and Up chair - continues to inspire interpretation nearly 50 years after its creation.[36] According to curator and author of SuperDesign, Maria Cristina Didero, "Pesce wanted to produce something about the condition of women in the world. The chair can be read as the mother, and the stool her child. But it could also be a ball and chain [suggesting] woman and the prison she was obliged to live in."[37]

Mr. Pesce is perhaps best known for his work with resin, molds, and casting techniques used to create objects, including vases, chairs, lamps and the two-dimensional reliefs that the designer calls “industrial skins.”[38] Since 1987, he has infused ordinary materials with experimental additives, such as liquid plant resin, and worked with foam and urethane, simplify the manufacturing processes and adapt limited industrial capabilities.[39] Pesce credits the early influence of his student work with three venerable Murano glassmakers[40] — Moretti, Vistosi, and Venini — whose casting techniques for informing his label-defying works of sculpture, furniture, vessels and paintings.[41] Even Pesce's own experimentation in glassmaking has led to inventive techniques and highly original results.[42] Mr. Pesce has even used urethane resin to create necklaces, bracelets, brooches, and rings.[43]

For Mr. Pesce, the design and development of portable goods have always incorporated craft-specialization, history, humor, and the human need for connection. Mr. Pesce's industrial design techniques such as diversified series production is a process by which he experiments with materials using a craft manufacturing sensibility applied to mass production methodology.[44] On the production line, for example, factory workers vary proportions to produce a series of objects with a "one of a kind" quality.[45]

Socio-political messaging is found in Mr. Pesce's collections, such as "Nobody’s Perfect" (2002) by Zerodisegno, and the 2010 series of irregularly shaped tables for Cassina, which together form the recognizable shape of a boot shape, commemorating the 150th Anniversary of the Unification of Italy,[31][46] and celebrate human diversity and connection,[47] as well as one-of-a-kind pieces like “America Table” (2012), with a red-white-and-blue resin tabletop American flag supported on letters that spell “independence,” and “Verbal Abuse” (1994), a tall, grided lamp that bends forward with attachable weights.[48]

Mr. Pesce's unconventional mixed-media industrial design and organic forms collected in major museums across the world ascribe the work to the realm of art. A 2014 retrospective exhibition The Time of Diversity at the MAXXI, National Museum of the 21st Century Arts, Rome, charted the artfulness of Pesce's product design from the 1960s to the present.[49] Recent exhibitions such as “What it is to be Human,” at The Peninsula Chicago, Art Basel in Hong Kong, and an artist-in-resident program at Peninsula Beijing, all featuring works by Gaetano Pesce that expand the renown artist and architect's history of public commitment to the arts.[50] In 2016, Pesce unveiled a site-specific sculpture "Majesty Betrayed" in Piazza Santa Maria Novella. The monumental female figure wrapped in a long cloak by Pesce was inspired by the Christian Maestà iconography of the Madonna on the Throne - the highly venerated Madonna Rucellai by Duccio di Boninsegna (1285), in Santa Maria Novella and later moved in the twentieth century the Uffizi.[51] Pesce's sculpture entitled "Porta Ritratti" (2018) for the Milan Fuorisalone was exhibited at the entrance of the Brera Academy of Fine Arts, and later, the 13th edition of Design Miami / Basel. The ambitious installation - a chair measuring over 13-feet (4-meters) high representing 20 human faces - according to Pesce, " is a Trojan horse that penetrates the Rocca dell'Arte making victims among the old mentality." The work is another compelling tribute to cultural diversity within society.[52]

Mr. Pesce's architecture and design has been published, exhibited, and collected internationally and included in the permanent collections of museums around the world.[53][54]