She became known to broader audiences in Latin America after recording a song with Ricardo Arjona in 2011, called "Fuiste Tú". In 2013, she recorded covers of the popular songs "Kiss of Fire" and "The Weed Smoker's Dream" with Hugh Laurie for his album, Didn't It Rain. On numerous occasions beginning in October 2016, she performed with Chris Thile on Live From Here giving her greater recognition among American listeners. Some of her popular covers include "Amapola" and "No Soy El Aire".

KCRW's Ariana Morgernstern, producer of Morning Becomes Eclectic, featured Moreno in an October 2008 podcast and bestowed "Today's Top Tune" status on her song "Song of You." She said she was "caught by surprise with its organic and understated feel. She sings beautifully both in English and Spanish.[2]

NPR reviewed Moreno's debut record Still the Unknown and said: "Whether Moreno decides to stick with pop, soul or Latin (or a fusion of all three) for future releases, Still the Unknown is a promising debut that indicates she won't go unnoticed for much longer." [3]

In 2006, she won the Grand Prize in the John Lennon Songwriting Contest with her song "Escondidos," first in the Latin category, then overall.

In July 2010, Moreno was nominated with her co-writer Vincent Jones for an Emmy in the category of "Outstanding Main Title Theme Music" for their theme song to NBC's Parks and Recreation.[4] 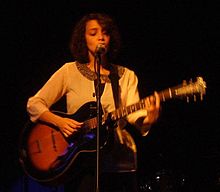 Gaby Moreno released a cover of Trinidadian artist David Rudder's 1998 song "The Immigrants," made with arranger and producer Van Dyke Parks, ahead of the 4 July holiday, with proceeds going to benefit CARECEN.[15]

¡Spangled!, a collaboration between Gaby Moreno and Van Dyke Parks, was released on Metamorfosis & Nonesuch Records. The album includes a bolero from Panama, a bossa nova from Brazil, a song by Moreno, David Rudder's "The Immigrants," and Ry Cooder, John Hiatt, and Jim Dickinson's song "Across the Borderline," performed with Cooder and Jackson Browne.[16]

A Grammy Award is an accolade by the Academy of Recording Arts & Sciences to recognize outstanding achievement in the music industry.[18]

A Latin Grammy Award is an accolade by the Latin Academy of Recording Arts & Sciences to recognize outstanding achievement in the music industry.