The GAZ-24 "Volga" is a car manufactured by the Gorkovsky Avtomobilny Zavod (GAZ, Gorky Automobile Plant) from 1970 to 1985 as a generation of its Volga marque. A largely redesigned version (practically, a new car in modified old body) – GAZ-24-10 – was produced from 1985 to 1992. Belgian-assembled re-badge models were sold as the Scaldia-Volga M24 and M24D for the Western European market.

Development of the GAZ-24 (then called M-24) finished in 1966 when several prototypes were built.[1] The Volga GAZ-24 was unveiled towards the end of 1967.[2] However, only 32 units were built in 1968).[3] primarily for road tests, with another 215 units built in 1969.[4] 1968/69-built Volgas are often called "pre-serial" because full-scale manufacturing started only in 1970 (18,486 units built). Distinctive feature of the very first several prototypes were two outside rearview mirrors fixed on front fenders. Most of the pre-serial and all serial cars got one mirror placed on front left door.[5]

The GAZ-24 was developed to replace the outdated Volga GAZ-21 developed in the 1950s. The new Volga had a longer wheelbase (2,800 mm (110 in)) than the GAZ-21 (2700 mm (106 in), but slightly shorter overall length (4,735 mm (186.4 in)[citation needed] compared to 4,810 mm (189 in)) ) and was substantially lower at 1,490 mm (59 in)) compared to 1,620 mm (64 in). Width remained untouched. Long wheelbase, boxier styling, bucket seats with lower bases and flat roof made the new Volga generously sized inside, with comfortable five- or six-passenger seating. The car was designed to last for years in severe road conditions, and its reinforced unibody construction gave the Volga extra weight if compared to foreign analogues. Yet power steering was not even an option, and it gained the nickname "barzha" (barge).[4]

Standard engine was aluminium-block overhead valve 2,445 cc (149.2 cu in) ZMZ-24D inline-four producing 95 hp (71 kW; 96 PS) with one twin-choke carburetor. Only a four-speed manual transmission with floor-mounted shifter was offered (though GAZ did prototype an automatic, a column-shift manual, and a three-speed manual with overdrive).[6]

The GAZ-21 trim lines ("standard" and "improved") were dropped, all GAZ-24 Volgas had similar trim. No specific options or extras were listed, but standard equipment included self-adjusting power drum brakes with front/rear split brake system, three-wave radio with power antenna, interior safety padding, central armrests (both front and rear), alternator, three-speed windshield wiper and foot-operated windshield washer, heater with defroster, rear window defogger, electric clock, and trunk and engine compartment lights. Early cars had "ribbon" speedometers,[7] with gauges that filled up with red, in a thermometer fashion. The interior was available in three colours – red, brown or light gray. Interior colour selection was often in contrast to the color of the exterior.[8] Official cars were almost always black outside and red inside.[8] The dashboard was made of aluminium and painted in exterior colour, the upper part covered with safety padding and black vinyl.

Some features of the Volga's styling were thematically quite similar to those of the GAZ-21, such as the vertical tail lights, so-called "baleen plates" grille, tiny fins on rear fenders. One of the most recognizable features of the GAZ-24 Volga sedan styling are chromed rhombic vents on the C-pillar. Among other distinctive features can be mentioned dashboard handles with "ivory" plastic inserts, two chromed "fangs" under front bumper, large two spoke steering wheel and large chromed parking brake handle placed under the dashboard on the right.

The GAZ-24 was displayed at the London Motor Show in 1970.[9] Full-scale manufacturing started 15 July 1970.[10] Export sales began in 1971.[9] During 1970-74 the Volga remained almost unchanged. Only minor modifications took place in 1972-73, when the car got new trunk decklid lock, flat ashtrays in rear doors instead of early ashtrays that were built in rear doors armrests, new rear bumper and new radio with more pleasant appearance and modified construction. In 1973 dashboard with simulated wood insert appeared (also there was a "silver" grained finish, used until 1974). After 1973, the ignition switch was moved from the dashboard to under the steering wheel to prevent knee injuries in road accidents, although that was inconvenient for the driver. Also in 1974, the Volga got additional C-pillar parking lights on (something like opera lights). The 24-01 was joined in 1977 by the 24-07, which was fitted to use liquified propane.[9]

The original strip speedometer was changed to dial 1975, the same year the ignition switch was moved from the dash to the steering column.[8] Beginning in 1977, seatbelts began to be offered.[8]

In 1978, about 1000 right-hand drive 24-56s were built for export to India, Pakistan, and Singapore; powered by the Peugeot XDP 4.90 engine, they were not assembled in Belgium, and were the last right-hand drive vehicles GAZ built.[8]

The Volga was a status symbol in the Soviet Union, being large and luxurious, with a three-band radio. Unlike the GAZ-21, however, for most of its production lifetime, it was not commonly available to the public;[8] those that were sold required a special permit to purchase them.[11] This would not begin to change until the 1980s.[11]

A Volga taxi in Kabul, Afghanistan in 2007

Volga cars were almost the only taxis in the USSR. In 1971, the GAZ-24-01 taxi was introduced.[9] It had cheap and easy-to-wash all-vinyl interior,[12] low compression ZMZ 24-01 engine (85 hp, SAE 95 hp) able to run on 76 octane fuel (most commonly available in the Soviet Union),[9] taximeter under the dash, and distinctive checkerboard stripe on front doors. At first, Volga taxis were painted in different light colors; later, most taxis were painted in lime-yellow.[13] The GAZ-24 is still famous for its roadworthiness and durability. Volga taxicabs often have more than 1,000,000 km (620,000 mi) on their odometers, and several engine rebuilds. Taxicab drivers nicknamed GAZ-24 sedan "The Shrimp" due to its slim appearance (when compared to the GAZ-21, nicknamed "The Holy Cow") and the two "fangs" beneath the front bumper that resembled shrimp's claws. Wagon taxis GAZ-24-04 (station wagons were used as cargo taxies) were nicknamed "The Shed" due to vast interior space; they had a payload of 400 kg (880 lb), thanks to stiffer rear springs.[9]

In 1972, the GAZ-24-02 4-door station wagon was introduced, fitted with three rows of seats.[9] However, to inhibit small private enterprises Volga wagons were not sold to private owners without special permit. For example, families with many children or sportsmen who had to carry heavy sport equipment (like parachutes) were allowed to purchase a Volga wagon. Famous clown and actor Yuri Nikulin was permitted to own a GAZ-24-02 wagon because he often transported heavy circus equipment. This restriction came from small volume of GAZ-24-02 production. Wagons were primarily used by hospitals (as ambulances), state-owned shops and taxi companies, Militsiya, GAI, post offices and other state enterprises. The wagon was sold freely in export markets.

The GAZ-24-02 had generous interior area with three rows of seats and 7-8-passenger seating. The area behind the front seat could be converted into spacious one-level cargo compartment. The 24-02 had heavy-duty rear leaf springs (six leaves as opposed to the sedan's five) and could carry up to 400 kg (880 lb), thanks to stiffer rear springs.[9]

The GAZ-24-04[14] was a taxicab variant of the Volga station wagon with special features similar to those of the sedan taxi.

The ambulance specification GAZ-24-03 model was introduced in 1973.

The GAZ never built GAZ-24 convertibles. All convertibles were produced by a military plant in the city of Bronnitsy. They were used for military parades. 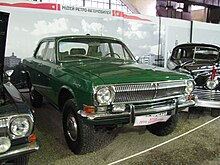 Volga-based pickup trucks were built by different car repairing plants all over the country. Exteriors differed.

During the winter of 1973-74, five AWD GAZ-24-95s were built.[15] It used a UAZ transfer case, with a heavily modified floorpan. The front axle ended up being a Volga rear axle turned backwards, attached to UAZ joints for the steering, with front leaf springs (on stronger frame rails, to carry the greater load).[15] The sump also had to be modified.[15] In all, the changes added 90 kg (200 lb).[15] Some disadvantages were discovered during the tests and this modification remained experimental.[citation needed] One survives in the GAZ plant's museum, another perhaps in private hands in Nizhny Novgorod.[15]

In 1975 the car was slightly modified. It got another, more conventional speedometer, more convenient outside rearview mirror. Engine cooling system was modified to use antifreeze instead of water.[16]

For the 1980 Summer Olympics a special fleet of Volga sedans and station wagons was built with special two-tone white and yellow paint.[19] They accompanied the Olympic Torch. The color scheme was chosen by the local Moscow organizers, not the IOC- that year's Winter Games fleet was light blue (Ford products).

RAF-2203 "Latvija" van by Rīgas Autobusu Fabrika (in production 1976-97) was based on drivetrain and suspensions of GAZ-24 Volga.

The GAZ-24 Volga was exported to many countries, from Indonesia and Latin America to Western Europe. Right-hand-drive export versions also existed. In Europe, one of the most popular Volgas were cars, both sedans and wagons, assembled in Antwerp by Scaldia-Volga S.A..[20] These cars were shipped to Belgium without engines, where they were fitted with Indenor diesels (the same as in the Peugeot 404),[21] a 2.1 litre unit with 62 PS (46 kW) until the 2300 D was introduced for 1980. The 2.3 litre XD2 has 70 PS (51 kW).[22] Those models were called M24D and M24DB (Break, station wagon), and there was also a "Luxe" version.[23] Standard Volgas with Soviet engines were sold as M24 and M24B (Break). Cars that were sold in Europe often had such features as metallic paint, simulated vinyl roof, leather interior and other luxuries. Station wagons sometimes had simulated "wood" decoration and often a rear window wiper and heater. These features were usually installed by local European GAZ dealers.

The petrol engine began disappearing from western European price lists towards the end of the 1970s. The Volga offered good value for money, with the retail price being lower than that of a Volkswagen Golf Diesel – however, the resale value was abysmal.[24] By late 1983, Belgian Volgas were also no longer available with sedan bodywork. The Diesel Break came either as the "N" (Normale) or the better equipped "GL".[25] The car was also sold in Austria, where importer ÖAF-Gräf & Stift referred to it as the "Wolga Attaché GAZ-24." ÖAF-Gräf & Stift stopped bringing in New Volgas after early 1981, although stock continued to be available until the end of the year and the company also kept providing occasional cars for Czech and Soviet diplomats stationed in Austria.[26] As in most European markets, the car found its main market amongst taxi drivers, who appreciated its low price and robustness, while being less concerned with resale values.[26]