Engraving of Scotswomen singing a waulking song while walking or fulling cloth, c. 1770.

Fulling (also known as tucking or walking (Scots: waukin, hence often spelled waulking in Scottish English)), is a step in woollen clothmaking which involves the cleansing of cloth (particularly wool) to eliminate oils, dirt, and other impurities, and to make it thicker. The practice died out with the modernisation of the industrial revolution.

Fulling involves two processes: scouring and milling (thickening). Originally, fulling was carried out by the pounding of the woollen cloth with a club, or the fuller's feet or hands. In Scottish Gaelic tradition, this process was accompanied by waulking songs, which women sang to set the pace. From the medieval period, however, fulling was often carried out in a water mill, followed by stretching the cloth on great frames known as tenters, to which it is attached by tenterhooks. It is from this process that the phrase being on tenterhooks is derived, as meaning to be held in suspense. The area where the tenters were erected was known as a tenterground.

In Roman times, fulling was conducted by slaves working the cloth while ankle deep in tubs of human urine. Urine was so important to the fulling business that it was taxed. Stale urine, known as wash, was a source of ammonium salts and assisted in cleansing and whitening the cloth. By the medieval period, fuller's earth had been introduced for use in the process. This is a soft clay-like material occurring naturally as an impure hydrous aluminium silicate. It was used in conjunction with wash. More recently, soap has been used.

The second function of fulling was to thicken cloth by matting the fibres together to give it strength and increase waterproofing (felting). This was vital in the case of woollens, made from carding wool, but not for worsted materials made from combing wool. After this stage, water was used to rinse out the foul-smelling liquor used during cleansing. Felting of wool occurs upon hammering or other mechanical agitation because the microscopic barbs on the surface of wool fibres hook together, somewhat like Velcro.

There are several Biblical references to fulling (2 Kings 18:17; Isaiah 7:3 and 36:2; Malachi 3:2; Mark 9:3). In addition to this, at least one reference appears in the speeches of Lysias, written in Athens during the 5th century BC. By the time of the Crusades in the late eleventh century, fulling mills were active throughout the medieval world.[1] They appear to have originated in 9th or 10th century in Europe. The earliest known reference to a fulling mill in France, which dates from about 1086, was discovered in Normandy.[2] 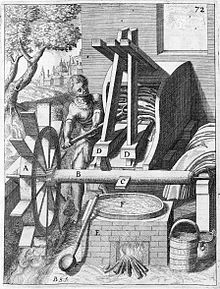 From the medieval period, the fulling of cloth often was undertaken in a water mill, known as a fulling mill, a walk mill, or a tuck mill, and in Wales, a pandy. In these, the cloth was beaten with wooden hammers, known as fulling stocks or fulling hammers. Fulling stocks were of two kinds, falling stocks (operating vertically) that were used only for scouring, and driving or hanging stocks. In both cases the machinery was operated by cams on the shaft of a waterwheel or on a tappet wheel, which lifted the hammer.

Driving stocks were pivoted so that the foot (the head of the hammer) struck the cloth almost horizontally. The stock had a tub holding the liquor and cloth. This was somewhat rounded on the side away from the hammer, so that the cloth gradually turned, ensuring that all parts of it were milled evenly. However, the cloth was taken out about every two hours to undo plaits and wrinkles. The 'foot' was approximately triangular in shape, with notches to assist the turning of the cloth.

There was a fulling mill established at Temple Guiting, Gloucestershire which was documented in the Domesday Book.[3]

The names for workers who performed these tasks (fuller, tucker, and walker[4]) have become common surnames.

The Welsh word for a fulling mill is pandy,[5] which appears in many place-names, for example Tonypandy ("fulling mill lea").