Full-size car—also known as large car—is a vehicle size class which originated in the United States and is used for cars larger than mid-size cars. It is the largest size class for cars.

The United States Environmental Protection Agency (EPA) Fuel Economy Regulations for 1977 and Later Model Year (dated July 1996) includes definitions for classes of automobiles.[2] Based on the combined passenger and cargo volume, large cars (full-size cars) are defined as having an interior volume index of more than 120 cu ft (3.4 m3) for sedan models, or 160 cu ft (4.5 m3) for station wagons.[3][4]

The lineage of mass-produced full-size American cars begins with the 1908 Ford Model T. In 1923, General Motors introduced the Chevrolet Superior, becoming the first vehicle to adopt a common chassis (the A-body) for several brands. In comparison to the cars of the 21st century, these vehicles are small in length and width.

From the 1920s to the 1950s, most manufacturers produced model lines in a single size, growing in size with each model redesign. While length and wheelbase varied between model lines,[when?] width was a relatively constant dimension, as the American federal government required the addition of clearance lights on a width past 80 inches.[5] 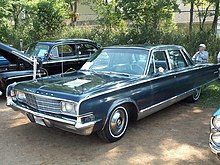 In 1960, following the introduction of compact cars (such as the Chevrolet Corvair, Ford Falcon and Plymouth Valiant), the "full-size car" designation came into wider use. In the 1960s, the term was applied to the traditional car lines of lower-price brands, including Chevrolet, Ford, and Plymouth.[6][7] As a relative term, full-size cars were marketed by the same brands offering compact cars, with entry-level cars for buyers seeking the roominess of a luxury car at a lower cost. Into the 1970s, the same vehicles could transport up to six occupants comfortably (or eight in a station wagon), at the expense of high fuel consumption.[8]

The sales of full-size vehicles in the United States declined after the early 1970s fuel crisis.[9] By that time, full-size cars had grown to wheelbases of 121–127 inches (3.1–3.2 m) and overall lengths of around 225 in (5,715 mm).[citation needed] In response to the 1978 implementation of CAFE, American manufacturers implemented downsizing to improve fuel economy, with full-size vehicles as the first model lines to see major change.

During the 1980s, to further comply with more stringent CAFE standards, manufacturers further reduced the exterior footprint of several model lines out of the full-size segment into the mid-size class. For 1982, Chrysler exited the full-size segment entirely, with the mid-size Dodge Diplomat and Plymouth Gran Fury serving as its largest sedan lines.

Following the 1985 model year, General Motors replaced most of its full-size rear-wheel-drive model lines with smaller front-wheel drive sedans on the H and C platforms. Only station wagons, the Chevrolet Caprice, and the Cadillac Brougham remained. Initially developed to replace the Ford LTD Crown Victoria, the 1986 Ford Taurus was produced alongside it as the Ford mid-size model line.

After largely abandoning the full-size segment for compact cars and minivans, Chrysler gained reentry into the full-size segment in 1988 with the Eagle Premier (also produced as the Dodge Monaco). Developed by AMC before its acquisition by Chrysler, the Premier was a version of the front-wheel drive Renault 25 adapted for North America. The Saab 9000 took a special position at the end of the 1980s, as for a long time it was the only imported car to be classified as a "large car" by the EPA.[13]

By 2000, with the sole exception of the Ford Crown Victoria, Mercury Grand Marquis, and Lincoln Town Car, full-size cars had abandoned rear-wheel drive and body-on-frame construction. Instead of model lineage, the EPA "large car" definition of over 120 interior cubic feet came into wide use.

Initially developed for the midsize Oldsmobile Aurora, the GM G-body chassis was expanded into the full-size segment for Cadillac in 2000 (for the Deville, later the DTS) and adapted by Buick (the Lucerne) in 2006. In 2005, Chrysler replaced the LH cars with the LX cars (returning to rear-wheel drive). The same year, Ford introduced the Five Hundred, its first front-wheel drive full-size car (the first American full-size car offered with all-wheel drive); in 2008, the Five Hundred was renamed the Taurus.

After the 2011 model year, Ford ended production of the Panther platform, shifting to the Ford Taurus and Lincoln MKS; in 2017, the latter was replaced by the Lincoln Continental. In 2011, General Motors ended production of the G-body for several chassis (with Cadillac later shifting its largest sedans to rear-wheel drive). In 2012, the Tesla Model S became the first fully electric full-size car sold in North America. For the 2013 model year, the Chevrolet Impala became the final American-market full-size sedan sold with a front bench seat.

By the mid-2010s, full-size cars began seeing a steep decline in sales in North America.[15] At the end of the decade, demand for sedans (of all sizes) shifted towards vehicles of other layouts, reducing or shuttering production of sedans entirely. In 2018, Ford announced the sales of all Ford-branded passenger cars (except for the Mustang) would end in North America by 2022.[16] GM announced the closure of several manufacturing facilities in the United States and Canada, with the production of the Chevrolet Impala and Buick LaCrosse ending in 2020. As of 2019, full-size cars from Asian manufacturers include the Genesis G90, Kia K900, and Acura RLX.[17]

In 2018, the three highest selling cars in the full-size sedan category in the United States were the Dodge Charger, Chevrolet Impala and Chrysler 300.[18]