Fukuoka is the capital and largest city of Fukuoka Prefecture, and the largest city on Kyūshū, with other major cities including Kitakyushu, Kurume, and Ōmuta.[3] Fukuoka Prefecture is located at the northernmost point of Kyūshū on the Kanmon Straits, connecting the Tsushima Strait and Seto Inland Sea across from Yamaguchi Prefecture on the island of Honshu, and extends south towards the Ariake Sea. 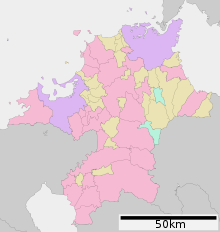 As of 1 April 2012, 18% of the land area of the prefecture was designated as natural parks: Setonaikai National Park, Genkai, Kitakyūshū, and Yaba-Hita-Hikosan quasi-national parks, and Chikugogawa, Chikuhō, Dazaifu, Sefuri Raizan, and Yabegawa Prefectural Natural Parks.[7]

Fukuoka includes the two largest cities on Kyūshū, Fukuoka and Kitakyushu, and much of Kyūshū's industry. It also includes a number of small islands near the north coast of Kyūshū.

Twenty-nine cities are in Fukuoka Prefecture:

One of Japan's top 5 universities, Kyushu University, is located in Fukuoka.

According to October 2018 estimates, the population in Fukuoka Prefecture reached 5,111,494 inhabitants, making the prefecture the 9th most populated of Japan's 47 prefectures. It is one of the few prefectures with a steadily increasing population. 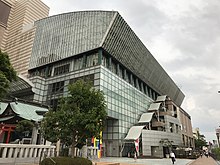 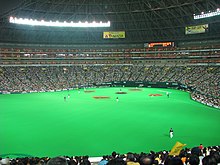 The sports teams listed below are based in Fukuoka.

Fukuoka Prefecture has the most designated yakuza groups among all of the prefectures, at five: the Kudo-kai, the Taishu-kai, the Fukuhaku-kai, the Dojin-kai and the Kyushu Seido-kai.[10] Between 2004 and 2009, and in early 2011,[11] Fukuoka Prefecture led the nation in gun-related incidents.[12] These incidents were mostly related to the local yakuza syndicates, specifically the Kudo-kai, the Dojin-kai, and the Kyushu Seido-kai.[11]

Fukuoka Prefecture had the highest frequency of youth crime among the prefectures of Japan from 2003 to 2007.[13]

According to statistics from the national police, the crime rate in Fukuoka was the eighth-highest in 2017, lower than in Osaka, Tokyo, Hyogo, Aichi, Saitama, Chiba and Ibaraki.[14] 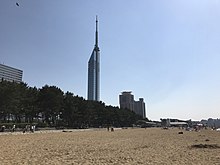 A sightseeing boat in Yanagawa Canal 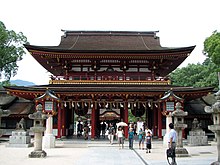 The most popular place for tourism is Fukuoka City, especially during the Dontaku festival, which attracts millions of visitors from across Japan during Golden Week.[15] Fukuoka is the main shopping, dining, transportation and entertainment hub in Kyushu.

Dazaifu is popular for its many temples and historical sites, as well as the Kyushu National Museum.

Yanagawa is sometimes called "the Venice of Japan" for its boat tours on the abundant, calm rivers that wind through the city.[16]

Kitakyushu features one of the famous night views of Japan from atop Mt. Sarakura, accessible via cablecar. The Mojiko area features waterfront dining, a market, and several preserved historical buildings. The Kanmon Kaikyo Tunnel which connects Kyushu (Moji ward, Kitakyushu) and Honshu (Shimonoseki) is free to walk through. The city center in Kokurakita ward contains the Riverwalk and Itsutsuya shopping complexes, Kokura castle, and the Uomachi Gintengai shopping arcade, the oldest shopping arcade in Japan.[17]