Fudan University (simplified Chinese: 复旦大学; traditional Chinese: 復旦大學; pinyin: Fùdàn Dàxué) is a major public research university in Shanghai, China. It is widely considered as one of the most prestigious and selective universities in China.[4] Founded in 1905, shortly before the end of China's imperial Qing dynasty, Fudan was the first university established independently by the Chinese people.[5][6] Fudan is a member of the elite C9 League and a Chinese Ministry of Education Class A Double First Class University.[7]

Fudan is renowned for its liberal atmosphere and rigorous academics. It is an important academic center for Chinese humanities, natural sciences, and medical studies. Fudan enjoys the reputation of The No.1 Academy of Jiangnan ("江南第一学府").[8] For the past hundred years, Fudan has made significant contributions to the development of the country, the rejuvenation of the nation, the well-being of the society, and the advance of the national education, science, medicine, and technology.[9] Fudan has cultivated a number of outstanding talents and many prominent figures for modern China. Notable Fudan alumni include Chen Yinke, Chen Wangdao, Chu Coching, Yan Fu, Yu Youren and "China's Kissinger" Wang Huning.

In 1911, during the Xinhai Revolution, the college was occupied as headquarters of the Guangfu Army and closed down for almost one year.[citation needed]

In 1917, Fudan Public School became a private university named the Private Fudan University, and also had a middle school and university-preparatory school. In 1929, Fudan reorganized its departments, expanding to include departments of journalism, municipals[clarification needed], law, and education.[citation needed]

After the Japanese invasion of China in 1937, Fudan moved with the Kuomintang government to the inland city of Chongqing, the wartime Chinese capital. On 25 December 1941, the First Meeting of Fifth Conference of the Highest Executive Authority of the National Government of the Republic of China voted to change Fudan University (Chongqing) to a public university with Wu Nanxuan as its president. Fudan University then became National Fudan University. After the end of World War II, it moved back to Shanghai.[citation needed]

After the founding of the People's Republic of China in 1949, Fudan lost its "National" appellation and became Fudan University to reflect the fact that all universities under the new socialist state would be public. Fudan was the first university to be reorganized by the new government in 1952 and modeled on Soviet education. The original departments were changed, with arts and sciences departments from at least ten other universities in eastern China being added.[citation needed] Parts of Aurora University merged into Fudan in 1952.

In the late 1970s, after the Cultural Revolution, the university was converted to a modern, comprehensive[clarification needed] university.[citation needed]

In December 2019, Fudan University changed its charter, removing the phrase "academic independence and freedom of thought" (學術獨立和思想自由) and including a "pledge to follow the Communist party's leadership" (學校堅持中國共產黨的領導), leading to protests among the students.[11][12] It also said that Fudan University had to “equip its teachers and employees” with “Xi Jinping Thought”, leading to concerns about the diminishing academic freedom of Fudan.[13][14] 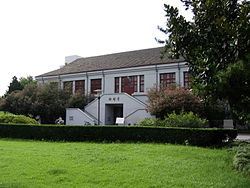 Fudan University has an "International Student's Dormitory", a building reserved as living quarters for any students from countries other than China studying either degree or non-degree programs. Notable alumni include Jennifer Chu and Audrey Lamsam of Arcadia, California, who started a nonprofit organization called "Food4Me" in 2012. This organization first stemmed from their studies as non-degree Chinese students at the university.

Fudan is a member of Universitas 21, an international consortium of research-driven universities.

The Guanghua Twin Towers (Chinese: 光华楼) at the center of the Handan campus reach 140.5 meters, reportedly the highest buildings ever constructed in a university campus in Asia, and 2nd around the world.

The High School Affiliated to Fudan University, located on the Handan campus, is one of the most prestigious high schools all over China mainland.

Fudan University Library was formally established in 1922, previously known as the Reading Room of Wu Wu (1918). Today it comprises the Liberal Arts Library, the Science Library and the Medical Library, with a total floor of 29,000 square meters.

By the end of 2004, the Library's collection composed of more than 4.4588 million copies and articles, including books, journals, bound volumes of newspapers, and audio-visual recordings. Of all these 400,000 are thread-bound books of Chinese classics (including 7,000 rare copies), 100,000 are books published during the reign of the Republic of China, and 1.392 million are foreign books. Additionally, there are 32,000 Chinese and foreign journals and periodicals. Every year 100,000 new books will be added to enlarge the collection. The library subscribes to around 7,000 printed journals.

The library has access to 24,000 full-text e-journals and over 150 CD and online databases. It has eight open stacks, two general reading rooms and 19 reading rooms with specialized functions, totaling 2,400 seats. The library is open for 112 hours weekly and serves more than 7,000 visiting readers daily.

Fudan University's undergraduate program is extremely selective. Fudan is one of the five universities in China whose undergraduate programs are the hardest for students to get in: less than 0.2% of National College Entrance Examination ("Gaokao") takers can make it (As a comparison, the five most selective Ivy League schools in 2012 let in three times the percentage (0.6%) of SAT-takers.).[24] Fudan has been placed consistently among the three most selective universities (with Tsinghua University and Peking University) in China for the last twenty years.[25][26][27][28]

Fudan has reconstructed its course system to suit education goals. A course scheme of general education, specialized education and basic education in arts and sciences has been implemented. Encompassing a complete and comprehensive range of disciplines, the courses of general education enable students to receive education in diverse fields. All of the 70-plus undergraduate majors of Fudan have been put into seven general categories so that students can benefit on a broader scale from the systematic discipline training. According to the Education Scheme for Arts and Sciences, course modules are determined by discipline systems and course suits, and credits by course modules. In this sense, Fudan provides students with more options for their college studies. In contrast with the traditional syllabus, the new module has appropriately decreased the gross credits and class hours. Along with minor programs and extracurricular academic activities, it contributes greatly to the intellectual development of undergraduate students, exposing them to a wider range of knowledge.

Starting from the 1950s, Fudan has enrolled international students – one of the first few institutions in China to do so. Since then, Fudan has accepted and trained over 10,000 foreign students from 100 countries and regions worldwide. At the end of 2006, there were 2,812 international students studying at Fudan University, ranked number 2 in the nation. Half of them were actively pursuing degrees, the rest were general visiting scholars. In addition, Fudan enrolls over 1700 short-term students each year.

The International Students Office is responsible for the management of all international students at Fudan University. 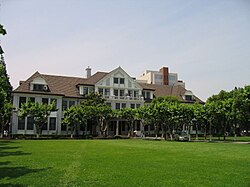 Fudan has established a campus structure called "one-body-two-wings", where the body is Handan (邯鄲) campus and Jiangwan (江灣) campus, which are only 2 miles (3.2 km) apart, and the two wings are Fenglin (楓林) campus and Zhangjiang (張江) campus. All four campuses are in downtown Shanghai and share the same central administration.

Handan campus, the main campus of Fudan, is located in Yangpu District, Shanghai. It contains the majority of the schools and departments. Freshman undergraduates live on this campus. Handan campus consists of four sub-campuses, namely the headquarters campus, the south campus, the north campus, and the east campus.

Only 2 miles (3.2 km) apart from Handan campus, Jiangwan campus is a new campus of Fudan University. The School of Law has moved to Jiangwan, and other schools will follow, including the School of Life Science, the College of Foreign Language and Literature, and School of Social Development and Public Policy.

Since 1952, Fudan University has a total of 95 academicians alumni, second only to Peking University and Tsinghua University in China.[31] After the Cultural Revolution, Fudan has also educated more than 60 alumni being full professors in TOP15 American/British universities, which makes Fudan the second highest Chinese university in this criteria.[32]

Today, associations organized by Fudan's alumni can be found in the United States, Japan, Australia, Canada, Taiwan, Hong Kong, and mainland China. Educationally, academically and economically, Fudan alumni's strengthened ties with their alma mater are playing a significant role in the development of the University. The routine services of these alumni associations include: updating contact lists, holding conferences, conducting Sino-foreign cultural exchanges, and keeping contact with other alumni associations throughout the world.

Li Deng-hui, ex-president of Fudan instructed the students to unite, serve and sacrifice. A well-known 77-year-old architect from the Alumni Association in Taipei also said that strength lies in unity and that Fudan alumni are expected to serve as an example in the increasing mergers of higher learning schools in mainland China.

A worldwide gathering is held annually in order to promote the relations between the alumni all over the world.

Notable Fudan alumni are listed below.

Fudan University is also a member of Universitas 21, which is an association of leading universities worldwide. Universitas 21 grants members of staff and students from the university many exchange chances and opportunities to research abroad.

To seek more support from its alumni in the US and cement its collaboration with Yale University, Fudan University launched the Fudan University Education Development Foundation[41] in New York in February 2008. It was the first time a Chinese university had launched such an initiative in the US.

In 1995, Fudan established the Nordic Centre in Shanghai, a joint platform for research and education with 14 universities from Denmark, Finland, Norway, and Sweden. By 2012, the Nordic Centre Fudan has 27 member institutions in 5 Nordic countries.[42]

In 2002, a joint venture was created between the Olin Business School (Washington University in St. Louis) and the School of Management at Fudan University. At the time, it was one of the first U.S.-Sino joint MBA programs in China. Eight years later, according to The Financial Times' 2010 rankings, the Washington University-Fudan University EMBA Program[43] was ranked as one of the top 20 international executive MBA programs worldwide. Also, for the fifth consecutive year, it was hailed as the best program in mainland China.[44]

In 2011, Fudan became part of the Tyndall Centre network, a research network centered on climate science and climate policy research. Fudan Tyndall Centre is funded with a 15-year commitment by the Chinese central government and the Shanghai City government. The UK launch of the Fudan Tyndall Centre alliance took place in Norwich in May 2011 when Professor Academician Yuliang Yang was awarded an Honorary Degree by the University of East Anglia[45]