The Frontier League is a professional independent baseball league with teams in the Northeast and Midwestern United States and Eastern Canada. The league and its teams are not affiliated with Major League Baseball or Minor League Baseball. The league was formed in 1993, and is the oldest currently running independent league in the United States. It is headquartered in Sauget, Illinois.

Teams in the Frontier League must recruit and sign their own players, who usually are undrafted college players or one-time prospects who have been released by their teams.

Frontier League rules limit teams to four "veterans" (Players older than 29 as of October 1), while a minimum of ten of the 24-man roster are required to be rookies.[1]

Due to the low pay, players typically live with host families and receive meal money during the season.

The first league champions were the Zanesville Greys. Only seven teams have won more than one championship: Springfield in 1996 and 1998; Johnstown in 1995 (as the Steal) and in 2000 (as the Johnnies), Richmond (now Traverse City) in 2001 and 2002, Windy City in 2007 and 2008, the Joliet Slammers in 2011 and 2018, and the Evansville Otters in 2006 and 2016. The Florence Y'alls (including years as Erie and Johnstown), the Rockford RiverHawks (including years as Portsmouth and Springfield), Schaumburg Boomers, and the River City Rascals (including years as Zanesville) are currently tied for the most league championships with each franchise winning three.

On June 20, 2000, Brian Tollberg debuted with the San Diego Padres, becoming the first player from the Frontier League to make it to the Majors. A week later, Morgan Burkhart made his debut with the Boston Red Sox.

Although the league does not have any teams located in the same city as Major League teams, it does nonetheless have teams located within the markets of Major League teams. The Chicago area had three teams (Joliet Slammers, Schaumburg Boomers and Windy City ThunderBolts) and St. Louis (Gateway Grizzlies), Cleveland (Lake Erie Crushers), Cincinnati (Florence Y'alls) and Pittsburgh (Washington Wild Things) each have one. The Wild Things, in particular, have been able to market themselves as a successful alternative to the Pittsburgh Pirates due to the latter franchise's long stretch of losing seasons, which lasted from the Frontier League's founding in 1993 until 2013 when the Pirates finished with a record of 94–68.[4]

On October 16, 2019, it was announced that the Frontier League would be merging with the Canadian American Association of Professional Baseball, absorbing five of its teams to form the largest independent professional baseball league.[5] The divisions were realigned and renamed to reflect the change. The Can-Am Division features the seven easternmost teams in the league (Trois-Rivieres, Quebec, New York, New Jersey, Sussex County, Washington, Lake Erie), while the remaining seven teams (Florence, Evansville, Schaumburg, Joliet, Windy City, Southern Illinois, and Gateway) compete in the Midwestern Division. 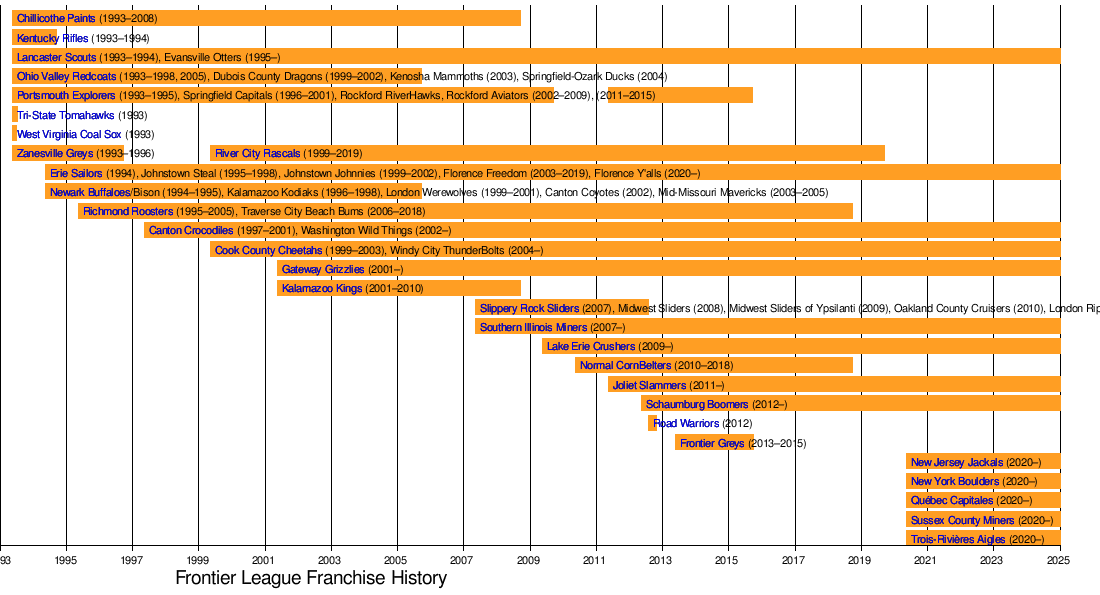