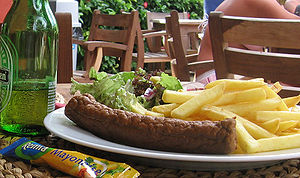 A frikandel with fries, lettuce and mayonnaise 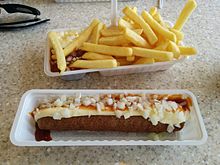 Friet speciaal and frikandel speciaal served in a Dutch snackbar

listen); plural frikandellen) is a traditional snack originating from the historical Low Countries (Netherlands, Belgium and north of France), a sort of minced-meat hot dog,[1][2] of which the modern version was developed after World War II. The history of this snack in the Spanish Netherlands goes back to the 17th century.[3]

Unlike the modern frika(n)del, the historical frikadel (frickedil) is made from minced veal and generally spiced with mace, nutmeg, salt, pepper and optionally orange peel. A version without egg and breadcrumbs was cooked in a veal net.

The shape of the frikadel could have been phallic on purpose. The writer P.C. Hooft called 'fricadellen' a recipe for old spinsters. Also, a special version of the frikadel was served to pregnant women, according to 18th century cookery books. It was a veal meatball containing an egg yolk, hidden and sewn into a small leaf of lettuce.

Until 2005, the official spelling of the name of this sausage in the Dutch language was frikadel, without an "n", but both variants are now allowed with frikandel being the more commonly used version.[4]

The modern frikandel is a cylindrical chewy, skinless, dark-coloured sausage-like meat product which is usually eaten warm. Unlike most sausages, the frikandel is deep-fried. In Belgium and in the north of France (Nord-Pas-de-Calais) it is called a "frikadel", "fricandelle" or "fricadelle". In some parts of Flanders (Belgium), notably around Antwerp, it is called "curryworst" (not to be confused with the German currywurst, though in eastern Germany people tend to make currywurst from skinless sausage). In the US it is marketed under the "Dutch Dawg" and "Freakandel" brands.[5][6] Due to the absence of a skin, one could argue that technically it is not a sausage.

In Belgium frikadel means (also raw) minced pork; it seldom contains other meat. Where the sausage is called "curryworst", the term frikadel is often used to describe a sort of meatball (the precursor of the frikandel, with the same meat), commonly eaten in Belgium, Germany and Denmark.

Who created the modern frikandel is contested. Some claimed it was first made by Gerrit de Vries in Dordrecht in 1954, when a law prevented him from selling his product as a meatball. He changed the name and shape instead of the recipe. Others say it was created by Jan Bekkers in Deurne in 1958, and named by him "frikandel" after he founded the Beckers factory the following year.

However, the present recipe with very fine mince is derived from Bekker's 1958 version. The de Vries 1954 sausage, named fricadelle, contained chunkier minced meat and essentially was a minced meat patty shaped like a sausage.[7][8]

In the Netherlands, northern France, Belgium and Curaçao, the frikandel consists of a mixture of mechanically separated meat, including chicken (40% or more) and pork (about 25%).[citation needed] In the US, it contains pork (50%), beef (35%) and non mechanically separated chicken (15%). Some manufacturers also add in a bit of horse meat. A halal version exists and contains only chicken and beef.[9] Other ingredients are bread crumbs, thickener, herbs and spices, onion and flavour enhancers. It is the most popular fast food snack in the Netherlands, followed by kroket. According to the AKSV (the General Association of Manufacturers of Cooking Supplies and Snacks in the Netherlands) 600 million sausages are produced each year in the Netherlands. Most of these are also sold in the Netherlands, where more than 37 sausages are consumed per capita per year.[8][10]

In the Netherlands, it is most often served with curry ketchup or mayonnaise, though some eat it with tomato ketchup, mustard or even apple sauce. Very popular is a frikandel served together with mayonnaise, curry ketchup and chopped raw onion: a frikandel speciaal.[8] The frikandel speciaal usually has a deep cut lengthwise through the middle to provide room for the chopped onions and the sauces. Some people prefer the taste of a frikandel if the cut is made before frying, resulting in a larger crisp surface. Sometimes the sausage is served on a bun and is then called a broodje frikandel.

In Belgium and in the north of France, it is served with any sauce of choice and sold in a variety of ways, for example with onions, in a long bun, a piece of baguette, as a kebab or plain and untouched.

Frikandellen can also be included in party-packs together with other Dutch snacks such as bitterballen, although they are significantly reduced in length. They are also often available in holiday resorts abroad which are popular with the Dutch, such as Lloret de Mar.

In the Netherlands, frikandel-eating contests are regularly held all over the country. The record for most frikandellen consumed in one hour was set in 2005 by Sjonnie Noordeinde of Delft, consuming 47 sausages of 80 grams each.[11]

The Dutch company Vanreusel created a number of variants of the frikandel such as the Frikandel XXL (a larger variant of the frikandel) in 2010 and the loempidel (a frikandel wrapped in a lumpia coat) in 2019.[12]

In many other countries, including South Africa, Denmark and Germany, frikadel or Frikadelle (not to be confused with frikandel) is the local name of minced-meat meatballs or patties like those used in hamburgers.