The French Open (French: Championnats Internationaux de France de Tennis), also called Roland-Garros (French: [ʁɔlɑ̃ ɡaʁos]), is a major tennis tournament held over two weeks at the Stade Roland-Garros in Paris, France, beginning in late May each year.[a] The venue is named after the French aviator Roland Garros. It is the premier clay court tennis championship tournament in the world and the second of the four annual Grand Slam tournaments,[4] the other three being the Australian Open, Wimbledon and the US Open. The French Open is currently the only Grand Slam tournament held on clay, and it is the conclusion of the spring clay court season. Before the Australian Open and the US Open were converted into hardcourt, the French Open was the lone non-grass tournament.[5] Between the seven rounds needed for a championship, the slow-playing surface and the best-of-five-set men's singles matches, the event is widely considered to be the most physically demanding tennis tournament in the world.[6][7]

Officially named in French Championnats Internationaux de France de tennis and Tournoi de Roland-Garros (the "French International Championships of Tennis" or "Roland Garros Tournament" in English), the tournament is referred to in English as the "French Open" and alternatively as "Roland Garros", which is the designation used by the tournament itself in all languages.[8] (The stadium and tournament are both hyphenated as Roland-Garros because French spelling rules dictate that in the name of a place or event named after a person, the elements of the name are joined together with a hyphen.[9])

In 1891 the Championnat de France, which is commonly referred to in English as the French Championships, began. They were only open to tennis players who were members of French clubs. The first winner was a Briton—H. Briggs—who was a Paris resident. The first women's singles tournament, with four entries, was held in 1897. The mixed doubles event was added in 1902 and the women's doubles in 1907. This "French club members only" tournament was played until 1924, using four different venues during that period:

Another clay court tournament, called the World Hard Court Championships, is sometimes considered the true precursor to the modern French Open as it admitted international competitors. This was held at Stade Français in Saint-Cloud, Paris from 1912 to 1914, 1920, 1921 and 1923, with the 1922 event held in Brussels, Belgium. Winners of this tournament included world No. 1s such as Tony Wilding from New Zealand (1913, 1914) and Bill Tilden from the US (1921). In 1924 there was no World Hard Court Championships due to tennis being played at the Paris Olympic Games.

In 1925, the French Championships became open to all amateurs internationally and was designated a major championship by the ILTF. It was held at the Stade Français in Saint-Cloud (site of the previous World Hard Court Championships) in 1925 and 1927, on clay courts. In 1926 the Racing Club de France hosted the event in Paris, site of the previous French club members only tournament, also on clay.

After the Mousquetaires or Philadelphia Four (René Lacoste, Jean Borotra, Henri Cochet, and Jacques Brugnon) won the Davis Cup on American soil in 1927, the French decided to defend the cup in 1928 at a new tennis stadium at Porte d'Auteuil. The Stade de France had offered the tennis authorities three hectares of land with the condition that the new stadium must be named after the World War I hero pilot Roland Garros.[10] The new Stade de Roland Garros (later renamed Court Philippe Chatrier in 1988) hosted that Davis Cup challenge. In 1928, the French Internationals were moved there, and the event has been held there ever since.[11]

During World War II, the tournament was held from 1941 through 1945 on the same grounds, but those events are not recognized by the French governing body, the Fédération Française de Tennis.[12] In 1946 and 1947, the French Championships were held after Wimbledon, making it the third Grand Slam event of the year. In 1968, the French Championships became the first Grand Slam tournament to go open, allowing both amateurs and professionals to compete.[11] 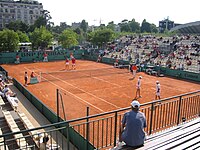 Court number 2 at the French Open.

Since 1981, new prizes have been presented: the Prix Orange (for the player demonstrating the best sportsmanship and cooperative attitude with the press), the Prix Citron (for the player with the strongest character and personality) and the Prix Bourgeon (for the tennis player revelation of the year). In another novelty, since 2006 the tournament has begun on a Sunday, featuring 12 singles matches played on the three main courts. Additionally, on the eve of the tournament's opening, the traditional Benny Berthet exhibition day takes place, where the profits go to different charity associations. In March 2007, it was announced that the event would provide equal prize money for both men and women in all rounds for the first time.[13] In 2010, it was announced that the French Open was considering a move away from Roland Garros as part of a continuing rejuvenation of the tournament.[14] Plans to renovate and expand Roland Garros have put aside any such consideration, and the tournament remains in its long time home.

Expansion in the 21st century

From 2004 to 2008, plans were developed to build a covered stadium with a roof, as complaints continued over delayed matches.[15][16][17] Various proposals were put forward to expand the facility or to move the French Open to a completely new, 55-court venue outside of Paris city limits. In 2011 the decision was taken to maintain the tournament within its existing venue.[18][19] The expansion project called for a new stadium to be built alongside the historical Auteuil's greenhouses and expansion of old stadiums and the tournament village.[20] A wide-ranging project to overhaul the venue was presented in 2011, including building a roof over Court Philippe-Chatrier, demolishing and replacing Court No. 1 with a grassy hill for outdoors viewing, and geographical extension of the venue eastward into the Jardin des Serres d'Auteuil.[21]

Legal opposition from environmental defence associations and other stakeholders delayed the works for several years as litigation ensued.[22] In particular, the city council voted in May 2015 against the expansion project, but on 9 June 2015 Paris Mayor Anne Hidalgo announced the signing of the construction permits, with work scheduled to begin in September of that year and concluding in 2019.[23][24] In December 2015, the Administrative Court of Paris once again halted renovation work, but the French Tennis Federation won the right to go through with the renovation on appeal.[25]

Renovation work finally commenced at the close of the 2018 edition of the tournament. The 2019 edition finally inaugurated the renewed Court Philippe-Chatrier and the new Court Simonne-Mathieu, named after France's second-highest achieving female tennis player, a court noted for its innovative use of greenhouse encasing architecture.[26] The renewal of the venue has been generally well-received by the players and the public.[27] The roof over the central court is slated to be constructed before the 2020 edition of the tournament, which has been postponed to September due to the COVID-19 pandemic.

Clay courts slow down the ball and produce a high bounce when compared with grass courts or hard courts. For this reason, clay courts take away some of the advantages of big servers and serve-and-volleyers, which makes it hard for these types of players to dominate on the surface. For example, Pete Sampras, known for his huge serve and who won 14 Grand Slam titles, never won the French Open – his best result was reaching the semi-finals in 1996. Many other notable players have won multiple Grand Slam events but have never won the French Open, including John McEnroe, Frank Sedgman, John Newcombe, Venus Williams, Stefan Edberg, Boris Becker, Jimmy Connors, Louise Brough, Virginia Wade or Martina Hingis; McEnroe and Edberg lost their sole French Open finals appearances in five sets.

On the other hand, players whose games are more suited to slower surfaces, such as Rafael Nadal, Björn Borg, Ivan Lendl, Mats Wilander, Justine Henin and Chris Evert, have found great success at this tournament. In the Open Era, the only male players who have won both the French Open and Wimbledon, played on faster grass courts, are Rod Laver, Jan Kodeš, Björn Borg, Andre Agassi, Rafael Nadal, Novak Djokovic and Roger Federer. Borg's French Open—Wimbledon double was achieved three times consecutively (1978, 1979, 1980) and regarded by Wimbledon officials as "the most difficult double in tennis."[28] The feat took 28 years to be repeated and was done 3 times consecutively, twice by Rafael Nadal (2008, 2010) and once by Roger Federer (2009).[29]

At the 2010 French Open there were 250 "ramasseurs de balles" which in English translates literally as "gatherers of balls". They are aged between 12 and 16 years old, and dress in matching shirts and shorts. The 250 ball boys and ball girls are chosen to take part in the French Open by an application and selection process, which in 2010 had approximately 2,500 applicants from across France.[30] Upon selection the ball boys and ball girls participate in preparatory training in the weeks leading up to the French Open to ensure that they are prepared for the day they set foot on the tennis court in front of a global audience.

For 2018, the prize money purse was increased to €39,197,000. If a player makes it to the indicated round, they will receive the points and money listed (provided they don't make it to a further round). Men and women often receive different point values based on the rules of their respective tours. Players receive prize money and points as follows:[31]

The trophies, designed and made by Maison Mellerio dits Meller, are all made of pure silver with finely etched decorations on their side. Each new singles winner gets his or her name written on the base of the trophy. Winners receive custom-made pure silver replicas of the trophies they have won.[32]

France Télévisions and Eurosport hold the broadcast rights to the French Open until 2021.

ITV Sport and Eurosport holds broadcasting rights to show the French Open tennis tournaments until 2021.[35] The bulk of the daily coverage is broadcast on ITV4 although both singles finals plus other weekend matches are shown on ITV.[36] John Inverdale hosts the coverage. Commentators include Jim Courier, Amélie Mauresmo, Sam Smith, Mark Petchey, Nick Mullins and Fabrice Santoro.

Studio presentation for the French Open on Eurosport[37] is hosted by Barbara Schett sometimes joined by Mats Wilander with the segment Hawk-Eye presented by former British Number 2 Jason Goodall.

NBC's coverage of the French Open began in 1975.[38] Tennis Channel owns pay television rights to the tournament. Coverage of morning window (U.S. time) matches were sub-licensed to ESPN for broadcast by ESPN2 from 2007 through 2015.[39] In August 2015, ESPN announced that it would discontinue its sub-licensing and drop coverage of the French Open beginning in 2016, with network staff citing that because of the structure of the arrangement, its coverage "did not fit our successful model at the other three Majors"—where ESPN is the exclusive rightsholder.[39] Tennis Channel chose to retain these rights under its new owner Sinclair Broadcast Group, nearly doubling the amount of coverage Tennis Channel will air from Roland Garros.[40][41]

Other than a three-year stint on CBS, NBC has remained the American television network home of the French Open since 1983. Since acquiring rights to the Indianapolis 500 in 2019, NBC's coverage begins on Memorial Day, the second day of the tournament; the network provides coverage windows on the holiday and the second weekend in the afternoon U.S. time. These windows consist of exclusive tape-delayed matches from earlier in the day, but any ongoing matches at the window's start are shown live to their conclusion. The later men's and women's semifinals are broadcast live on NBC in the Eastern Time Zone and tape-delayed in others, but since 2017 these matches are also simulcast on NBCSN to allow nationwide live coverage. Finals are live nationwide.[42]

Other countries and areas