French India, formally the Établissements français dans l'Inde[a] ('French Settlements in India'), was a French colony comprising geographically separate enclaves on the Indian subcontinent. The possessions were originally acquired by the French East India Company beginning in the second half of the 17th century, and were de facto incorporated into the Republic of India in 1950 and 1954. The French establishments included Pondichéry, Karikal, Yanaon (Andhra Pradesh) on the Coromandel Coast and Mahé on the Malabar Coast and Chandernagor in Bengal. French India also included several loges ('lodges', subsidiary trading stations) in other towns, but after 1816, the loges had little commercial importance and the towns to which they were attached came under British administration. 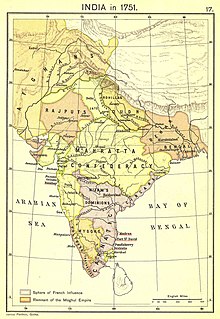 India at the height of French Influence (1751) 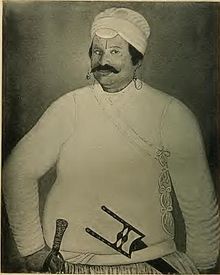 A portrait of Ananda Ranga Pillai 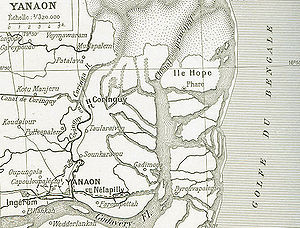 View of Pondicherry in the late 18th century

French factory (trading post) at Patna on the Ganges 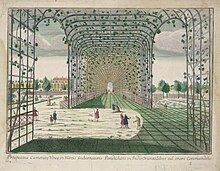 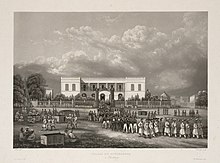 View of the Palace of the Governor of Pondicherry in 1850

France was the last of the major European maritime powers of the 17th century to enter the East India trade. Six decades after the foundation of the English and Dutch East India companies (in 1600 and 1602 respectively), and at a time when both companies were multiplying factories (trading posts) on the shores of India, the French still did not have a viable trading company or a single permanent establishment in the East.

Historians have sought to explain France's late entrance in the East India trade. They cite geopolitical circumstances such as the inland position of the French capital, France's numerous internal customs barriers and parochial perspectives of merchants on France's Atlantic coast, who had little appetite for the large-scale investment required to develop a viable trading enterprise with the distant East Indies.[5][6]

The first French commercial venture to India is believed to have taken place in the first half of the 16th century, in the reign of King Francis I, when two ships were fitted out by some merchants of Rouen to trade in eastern seas; they sailed from Le Havre and were never heard of again. In 1604 a company was granted letters patent by King Henry IV, but the project failed. Fresh letters patent were issued in 1615, and two ships went to India, only one returning.[7]

La Compagnie française des Indes orientales (French East India Company) was formed under the auspices of Cardinal Richelieu (1642) and reconstructed under Jean-Baptiste Colbert (1664), sending an expedition to Madagascar. In 1667 the French India Company sent out another expedition, under the command of François Caron (who was accompanied by a Persian named Marcara), which reached Surat in 1668 and established the first French factory in India.[8][9]

In 1669, Marcara succeeded in establishing another French factory at Masulipatam. In 1672, Fort Saint Thomas was taken but the French were driven out by the Dutch. Chandernagore (present-day Chandannagar) was established in 1692, with the permission of Nawab Shaista Khan, the Mughal governor of Bengal. In 1673, the French acquired the area of Pondicherry from the qiladar of Valikondapuram under the Sultan of Bijapur, and thus the foundation of Pondichéry was laid. By 1720, the French had lost their factories at Surat, Masulipatam and Bantam to the British East India Company.

On 4 February 1673, Bellanger de l'Espinay, a French officer, took up residence in the Danish Lodge in Pondichéry, thereby commencing the French administration of Pondichéry. In 1674 François Martin, the first Governor, initiated ambitious projects to transform Pondichéry from a small fishing village into a flourishing port-town. The French, though, found themselves in continual conflict with the Dutch and the English. The case of France was upheld for many years at the court of the Sultan of Golconda, Qutb Shah, by a French Huguenot physician named Antoine d'Estremau. In 1693 the Dutch captured Pondichéry and augmented the fortifications. The French regained the town in 1699 through the Treaty of Ryswick, signed on 20 September 1697.

From their arrival until 1741, the objectives of the French, like those of the British, were purely commercial. During this period, the French East India Company peacefully acquired Yanam (about 840 kilometres or 520 miles north-east of Pondichéry on Andhra Coast) in 1723, Mahe on Malabar Coast in 1725 and Karaikal (about 150 kilometres or 93 miles south of Pondichéry) in 1739. In the early 18th century, the town of Pondichéry was laid out on a grid pattern and grew considerably. Able governors like Pierre Christophe Le Noir (1726–1735) and Pierre Benoît Dumas (1735–1741) expanded the Pondichéry area and made it a large and rich town.

Soon after his arrival in 1741, the most famous governor of French India, Joseph François Dupleix, began to cherish the ambition of a French territorial empire in India in spite of the pronounced uninterested attitude of his distant superiors and of the French government, which didn't want to provoke the British. Dupleix's ambition clashed with British interests in India and a period of military skirmishes and political intrigues began and continued even in rare periods when France and Great Britain were officially at peace. Under the command of the Marquis de Bussy-Castelnau, Dupleix's army successfully controlled the area between Hyderabad and Cape Comorin. But then Robert Clive arrived in India in 1744, a British officer who dashed the hopes of Dupleix to create a French empire in India.

After a defeat and failed peace talks, Dupleix was summarily dismissed and recalled to France in 1754.

In spite of a treaty between the British and French agreeing not to interfere in regional Indian affairs, their colonial intrigues continued. The French expanded their influence at the court of the Nawab of Bengal and increased their trading activity in Bengal. In 1756, the French encouraged the Nawab (Siraj ud-Daulah) to attack and take the British Fort William in Calcutta. This led to the Battle of Plassey in 1757, where the British decisively defeated the Nawab and his French allies, resulting in the extension of British power over the entire province of Bengal.

Subsequently, France sent Lally-Tollendal to recover the lost French possessions and drive the British out of India. Lally arrived in Pondichéry in 1758, had some initial success and razed Fort St. David in Cuddalore District to the ground in 1758, but strategic mistakes by Lally led to the loss of the Hyderabad region, the Battle of Wandiwash, and the siege of Pondicherry in 1760. In 1761, the British razed Pondichéry to the ground in revenge for the French depredations; it lay in ruins for four years. The French had lost their hold now in South India too.

In 1765 Pondichéry was returned to France in accordance with a 1763 peace treaty with Britain. Governor Jean Law de Lauriston set to rebuild the town on its former layout and after five months 200 European and 2000 Tamil houses had been erected. In 1769 the French East India Company, unable to support itself financially, was abolished by the French Crown, which assumed administration of the French possessions in India. During the next 50 years, Pondichéry changed hands between France and Britain with the regularity of their wars and peace treaties.

In 1816, after the conclusion of the Napoleonic Wars, the five establishments of Pondichéry, Chandernagore, Karaikal, Mahe and Yanam and the lodges at Machilipatnam, Kozhikode and Surat were returned to France. Pondichéry had lost much of its former glory, and Chandernagore dwindled into an insignificant outpost to the north of the rapidly growing British metropolis of Calcutta. Successive governors tried, with mixed results, to improve infrastructure, industry, law and education over the next 138 years.

By a decree of 25 January 1871, French India was to have an elective general council (conseil général) and elective local councils (conseil local). The results of this measure were not very satisfactory, and the qualifications for and the classes of the franchise were modified. The governor resided at Pondichéry and was assisted by a council. There were two Tribunaux d'instance (Tribunals of first instance) (at Pondichéry and Karikal) one Cour d'appel (Court of Appeal) (at Pondichéry) and five Justices de paix (Justices of the Peace). Agricultural production consisted of rice, peanuts, tobacco, betel nuts and vegetables.[7]

The Independence of India on 15 August 1947 gave impetus to the union of France's Indian possessions with former British India. The lodges in Machilipatnam, Kozhikode and Surat were ceded to India in October 1947. An agreement between France and India in 1948 agreed to an election in France's remaining Indian possessions to choose their political future. Governance of Chandernagore was ceded to India on 2 May 1950, then it was merged with West Bengal state on 2 October 1954. On 1 November 1954, the four enclaves of Pondichéry, Yanam, Mahe, and Karikal were de facto transferred to the Indian Union and became the Union Territory of Puducherry. The de jure union of French India with India did not take place until 1962 when the French Parliament in Paris ratified the treaty with India. 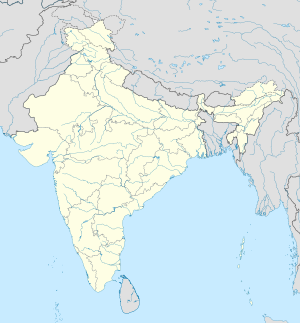 The name 'loge' was given, under the regime of the French East India company, in factories or insulated establishments consisting of a home with an adjacent ground, where France had the right to fly its flag and to form trading posts.

French India became a territoire d'outre-mer of France in 1946.

French India de facto transferred to the Republic of India in 1954.

The first High Commissioner, Kewal Singh was appointed immediately after the Kizhoor referendum on 21 October 1954 as per Foreign Jurisdiction Act, 1947.[11]:964 The Chief Commissioner has the powers of the former French commissioner, but is under the direct control of the Union Government.[12]:198