French colonial empire Enlarge French Polynesia
This article is about every French colonial possession in history. For the current French overseas possessions, see Overseas France.
Wikimedia list article
This list is incomplete; you can help by expanding it.

From the 16th to the 17th centuries, the First French colonial empire stretched from a total area at its peak in 1680 to over 10,000,000 km2 (3,900,000 sq mi), the second largest empire in the world at the time behind only the Spanish Empire. During the 19th and 20th centuries, the French colonial empire was the second largest colonial empire in the world only behind the British Empire; it extended over 13,500,000 km2 (5,200,000 sq mi) of land at its height in the 1920s and 1930s. In terms of population however, on the eve of World War II, France and her colonial possessions totaled only 150 million inhabitants, compared to 330 million for British India alone.

France began to establish colonies in North America, the Caribbean and India, following Spanish and Portuguese successes during the Age of Discovery, in rivalry with Britain. A series of wars with Britain during the 18th century and early 19th century, which France finally lost, almost ended its colonial ambitions in these regions, and without it what some historians term the "first" French colonial empire. In the 19th century, starting with the conquest of Algiers in 1830, France began to establish a new empire in Africa and Southeast Asia.

The following is a list of all countries that were part of the French colonial empires in the last 500 years, either entirely or in part, either under French sovereignty or as mandate.

Further information: List of French forts in North America
See also: Former colonies and territories in Canada and Timeline of the colonization of North America 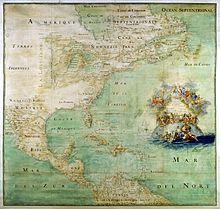 Map of the northern part and upper southern parts of the Americas, showing the results of the expeditions of Father Marquette and Louis Jolliet (1673) and of Cavelier de la Salle in the Mississippi valley (1681). 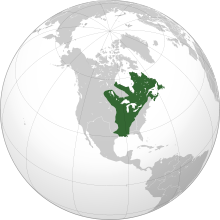 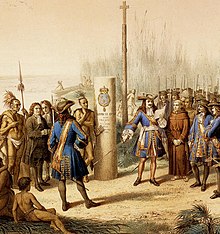 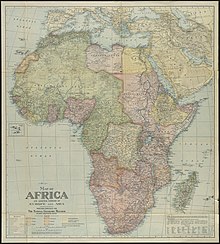 Map of French colonies in Africa (in green) 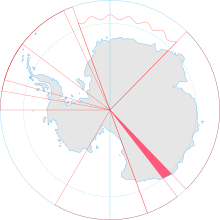